The Nunchaku Controller!
The 3kg Bag of Conchiglie 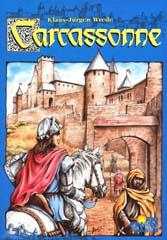 Played my first game of Carcassonne last night. This is a German-made "designer game" (I dislike that term, but it has persisted) with an even more abstracted basis than Settlers of Catan. The core mechanics are beautifully concieved, and the game supports a wide variety of ludic play styles; the game supports agonistic play, with a fair component of alea, but there is also simple mimicry in the building of the landscape. A real strength of this sort of abstract game is when it is designed for agonistic play but supports co-operation in its internal economy as a natural consequence of the simplicity of its mechanics.

It has several of the traits required to make a successful boardgame - it can be played in less than an hour, it supports a good number of players with no change in the play time (2-5 players, but works just as well heads up as in a larger group), you can learn to play in minutes, the turn sequence is trivial, and the aleatory element is sufficient to allow anyone a chance of winning, but not so large as to undermine player skill as a key factor. Plus, the pieces are satisfying to play with - the wooden "meeple" counters, like the settlements and cities in Klaus Teuber's masterwork, are deliciously tactile. The absence of a setup phase (an unavoidable overhead in Settlers) also smooths the play experience. 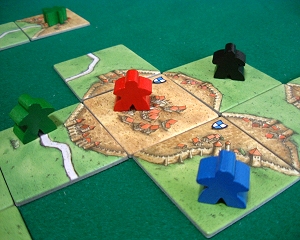 At a comfortable price point, I would suggest that anyone who enjoys hobby games, and especially those looking for boardgames which can be played by non-hobby gamers, will not regret picking up a copy of Carcassonne.

Ooh, looks great. I'll have to pick this up. Sad that it has been out this long and this is the first I've heard about it.

Thought I'd gone to the wrong site for a minute!

Carcassonne is a lovely game, although I wouldn't be tempted to buy all the expansions at once. On the other hand the variants "Hunters and Gatherers" and "Ark of the Covenant" (both stand alone) are highly recommended, perhaps even over the basic game. The scoring is slightly simpler for the field areas but the basic essence is the same.

Do check out www.boardgamegeek.com. It is an immensely detailed community driven board game database, with thousands of reviews, photos and discussions about tens of thousands of games.

You only mention Settlers and Carcassonne on your blog. If you haven't already, try one of the heavier games such as Puerto Rico, or any game by Reiner Knizia (Samurai, Through the Desert and Tigris & Euphrates are highly recommended). They keep the same design ethic, but add more layers of strategy and interaction.

I am a big fan of these German/designer games. There is real innovation in the designs and they hit a lot of the same buttons as many more expensive non-social video games do. Also, almost every german game has the name of the designer prominently on the top of the box. How many video games can you name that do the same for their development studio?

I'll second that recommendation for the "Hunters and Gatherers" expansion.

I always liked Carcassonne because the method of scoring doesn't lead to quite as much direct competition as other games. At least not with the folks I play with. We tend to focus more on helping each other out with placement and worry about points at the end. And we've never had any big arguments when a winner's been declared.

A big change compared to, say, playing Illuminati, where, due to rampant backstabbing and constant dogpiles on the "leader" make you want to resort to physical violence - one of the big reasons I've never played that game with my highly-competitive spouse.

I tend to find Carcassonne plays very differently with different groups. With my wife and friends the game tends to be positive, with lots of alliances and "pleasing" placement. Playing at work, however, the games are *extremely* cut-throat. There are never alliances, and frequently tiles are placed specifically to make other player's features more difficult/impossible to complete.
Interestingly, these styles seem to be exclusive. Trying to be aggressive with my wife leads to me being cut out of the big features (and means sleeping on the sofa!), and trying to be friendly at work leads to me being back-stabbed and bullied.
Deciding what sort of strategy to use depends on the personalities of the other players, much like Settlers (and innumerable other German style games), which is part of what makes it such a joy.

Ben, by 'heavier' do you mean 'more complex mechanics/longer play time'? Games with play lengths around 1 hour are ideal for my group. We do occasionally have hobby game days where we break out longer games like Car Wars, Battlemyst or Junta - but very intermittently.

The biggest brake on my acquisition of new board games is that in the US I can buy them at effectively half the UK price (thanks to the exchange rate), so I'm reluctant to buy the more expensive games when I'm on this side of the pond.

I decided against buying 'Hunters and Gatherers' this weekend because a frank discussion with the mistress of the game store suggested it supported more directly competitive play than the original. The potential for co-operative play inherent to the basic set is a large part of its appeal for me.

Nice to see a new face in the comments! :)

By heavier games I broadly mean ones with more complex rules for new players. I'm certain you would have no problem whatsoever understanding them straight away, but an eccentric aunt or young nephew without a basic grasp of how games "work" might not. A video game comparison would possibly be between Final Fantasy and Baldur's Gate - both are easy to learn, but Baldur's Gate requires a base understanding of RPG systems to get off the ground.

Play times for most German style games rarely exceed 2 hours, and are most often 1-1.5 hrs. Playing games like Battle Mist and Junta I can see how you might be concerned! Talk about timesinks!

Prices in the UK can be a little high I agree. I personally order directly from Germany (adamspielt.de/playme.de), where the prices are even less than in the US and shipping is cheap. Of course this means the game is the German language version, so as a non-speaker I need to download the rules from BoardGameGeek.com. Since the vast majority of these games have little or no in-game text, this has been best method for me. Obviously this wouldn't work for people who like more wordy games (like the current trend for CCG-style-yet-non-collectable card games).

It is interesting you mention you decided against the version with more direct conflict - I have noticed that board gamers slot neatly into your play style research for computer gamers. Since they are a very social activity, there are a lot of games that aim for type 4 players.

A good number focus on efficient (Manager style) play. The player who can manage their game better than the others wins. There is only indirect conflict as you affect the shared playing field, but there is no way to directly hurt your opponent. Great examples are Puerto Rico, Ticket to Ride and Atlantic Star.

Participant type play is very strongly catered for by quick light games like Carcassonne, Niagara, Bohnanza and 6 Nimmt, but there are also a number of explicitly cooperative games such as Shadows Over Camelot, Arkham Horror and Knizia's Lord of the Rings. Winning or losing is completely secondary to the experience. In fact Lord of the Rings is notoriously difficult to win and the players (the hobbits) only very rarely beat the game. It says a lot that it is still such a popular game.

Competitive play is represented by the pure abstracts that made Knizia famous (I already mentioned his famous 3 - Samurai, Through the Desert and Euphrates & Tigris). Despite being directly competitive games, they all tend to be very constructive. You can make life difficult for other players, but rarely destroy anything they have created.

It would be interesting to see if peoples video gaming style matches their board gaming style - how do you fit in?

Whoops, a bit of an essay there, sorry for length.

Thanks for the extra information - I'm always looking for pointers for new boardgames. I tend to only buy boardgames on recommendations, although I take the odd gamble when I'm in the US and Gameboard has a two-for-one promotion. :)

Is Shadows Over Camelot the game with the traitor? Except there might not be a traitor? This was mentioned to me by the mistress of the game store I was at at the weekend, and (if it's the same game) sounds particularly interesting. What's the typical play time?

I suspect there would be significant crossover between video game play styles and boardgame play styles. In terms of video games, I see myself as a recovering Type 1 player who is now more interested in the lower-stress Type 3 play (although the Type 1 side is always there, lurking...). In boardgames, I tend to enjoy games where I can pursue my own little story within the space of the game - a fairly Type 3 approach, all in all.

Carcasonne is, simply, brilliant. There are few board games that I have time to play anymore, but this one I make time for.

Hunters & Gatherers is an interesting "version" of Carcassonne. The pieces take longer to parse initially, but it is as easy to place them as in Carcassonne, as you might expect.

I can see where there might be more competitive opportunities in Hunters & Gatherers, but I still feel that overall it offers the same sort of competitive/co-operative types of play as Carcassonne.

Shadows over Camelot is the one that might have a traitor. I haven't sat down and played it, but I've seen it played by a group of kids and adults in around an hour and a half, which is how long the manufacturer estimates http://www.boardgamegeek.com/game/15062. The official site is at http://www.shadowsovercamelot.com