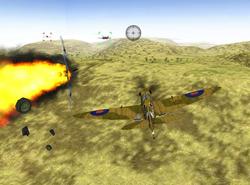 Air Conflicts is a small and obscure game project coming together via our Slovakian friends at 3D People. There's every chance that the only place you'll hear about it is right here in my blog, although I expect that it will get a small release in the US, along with its European and Russian release. We have been brought in to guide the design process; it's the smallest PC game project I've ever been attached to, and I'm finding it quite refreshing.

The game, as is readily apparent from the screenshots of the demo, is an arcade-style flying game set in World War II. The controls are purposefully simple, and even people who usually struggle with the spatial aspects of flight sims should be able to handle it to some degree. Yes, World War II is a much overused implicit IP (intellectual property) - but if you're going to make a small arcade flight game, it might as well have a decent shot at an audience.

The team, which Peter at 3D People has decided to take under his wing, as it were, have produced an arcade-style flight engine and some pleasing plane models. The design challenge for the game is how to add value to the product without adding to the cost. It's going to be on a tight budget, so there's no room for extravagance.

It begins with determining who the audience will be. Likely, this will come from two sources: Hardcore gamers with a penchant for WWII flight games (who may have expectations for the game beyond what it's budget may allow) and Casual gamers with a predilection for WWII who will likely come to the game as an impulse purchase. Realistically, the marketing isn't going to be there to hit a large percentage of the latter - but on the other hand, the cluster of players involved is large enough that even a small capture will pay for the cost of making the game.

The core gameplay is going to be based around two activities: simple dogfighting and bombing runs. Adding to these activities would be to seriously increase the development costs, so we needed a way to leverage the existing play, along with the the value of the implied IP. For once, play style isn't likely to be a key issue in getting the game to make back its costs, because it's likely to be an impulse purchase - so we're going to get a bit of a cross section of players.

The pre-development design meetings for the game focused upon how we were going to structure it. Structure is one of the cheapest elements of a game design, but it can make the world of difference to how the game is enjoyed. For instance, a colleague and I are playing through the NES version of the original Metroid (emulated on the Gamecube) right now, which we are enjoying for its retro charms. (If you didn't play exploration games in the 80's, and you don't have tolerance for fail-repeat gameplay, you'll struggle to appreciate it - but it has aged quite well). It's structure is years ahead of the contemporaries, albeit requiring a code to save (done automatically on the cube); it has progress mediated by the acquisition of new abilities, restart points at appropriate nodes and semi-ratcheted character development - all quite ground breaking for 1986.

Back to the design problem. The most common structure in games, and in flight games in particular, is fail-repeat. You must overcome the next challenge to continue. You must beat this mission to continue. If you fail, you must keep at it over and over again until you succeed. Not too much of a problem if you tend towards Type 1 Conqueror play - there's the emotional payoff of fiero (triumph over adversity) when you beat a tricky mission, after all, and players tending to this play style are highly tolerant of fail-repeat gameplay. But it can be a turn off to players preferring other play styles. 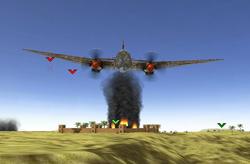 The structure we decided to explore with Air Conflicts is fail-continue. Win or lose, when you take a plane out for a sortie, the war goes on irrespective of the outcome of your mission. We're by no means the first to use this structure - I think I first came upon it with Defender of the Crown back in 1987 (only a year after Metroid). It's very rarely used, and it has certain demands.

Firstly, if you're using fail-continue structure you are expressly expecting your player to go through the same chunk of gameplay (campaign, as it is for Air Conflicts) more than once - if only through replay. Therefore, that gameplay chunk needs to be short enough that the player can sit down and play a campaign just for the fun of it - under 60 minutes seems reasonable for a non-specific audience which includes Casual players.

Secondly, if the game goes on regardless of outcome, the game can't get significantly harder to play or win when the player fails - otherwise you have feedback which will mean you effectively force the player to give up (or reload) when they are failing.

Thirdly, the player needs to understand that the war goes on whether you win or lose. This is easier in a strategy game, where the narrative is maintained by the pieces on the board. Harder in a flight game. In fact, when the demo arrived on my desk last week, one of the most apparent problems that needs fixing is that we need some brief narrative material (state of the war reports, for instance) to underline to the player the passage of time, although we are fixing this by adding dispatches which summarise the player's achievements in the previous sortie along with the state of the war.

The way it works in Air Conflicts is that the player represents a particularly poorly supplied squadron, assigned to a particular campaign. For the demo, this is the RAF's North Africa campaign, from Operation Compass through to Operation Supercharge, with some of the Battle of Crete thrown in for good measure. You begin the North Africa campaign with 3 Spitfires and a Lancaster bomber. It begins in December 1940, and ends twelve months later - each sortie the player undertakes occurs in a single month. (I'm not very strong on WWII history, but I'm happy to research, and my brother has fairly encyclopaedic knowledge of the era).

The player chooses an assignment from a list each month - either a key mission, like the Battle of El Alamein, or a minor assignment, like training Manoeuvres or a routine Patrol. They then choose a plane from their hanger - which can change the assignment. In a strategic bombing mission, for instance, if you choose a bomber you'll be hitting the objectives yourself. Choose a fighter, and you'll be escorting the bombers. To add a little more to this system, some sorties have emergent missions - a routine patrol could turn into a mission to prevent an enemy bombing, for instance.

If the player fails, and it's inevitable that they will from time to time, they lose the plane they were flying from their hanger. New planes are assigned to the player as they achieve successes on the battlefield. This is the essential tension of a single campaign mode - losing a Spitfire isn't a big deal, losing a Lancaster can be costly. With this in mind, the player is encouraged to withdraw from battle when the situation is desperate, rather than losing a plane. This is the sort of play a fail-repeat game simply cannot offer.

Progress is not achieved at the campaign level, per se, but rather in the rank that the player earns. You can work your way up to the top rank in each of three air forces - but you'll need to excel in the three campaigns that will be included for each side to make it to Marshal of the RAF, Reichsmarshall or Marshal of the Soviet Union.

I really enjoyed playing the first demo of the game. It was a lot more complete, and a lot more fun, than even I thought it was going to be. I play a lot of early demos in my line of work... most are, well, a long way from what most people would consider fun. You have to be able to see through the problems to see the value - but already, I can see the fun in Air Conflicts, which is encouraging. It supports fiero - because some of the missions can afford to be quite hard, since you don't have to beat them to progress - and it also supports simple mimicry. 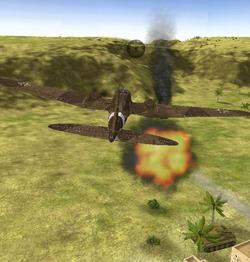 In fact, I've played through the demo North Africa campaign, which takes about 45 minutes, more times than I can justify as work, which is a good sign. The bombers in particular are a joy to fly - they have little tail gunners that have a crack and enemy planes in your rear quarter. Sadly, a single frame of animation can't capture the simply joy of this, but it's a lot of fun just to watch. (I'm sure other games have done this too, but I haven't played them myself).

The team is refining the demo even as I write, and soon it should be ready to take to publishers. Apart from some tweaking of the missions and parameters, we won't have much more to do on the design until it is signed. However, one future design problem is troubling me.

Do we let the Nazi's win at the end of the Luftwaffe campaigns? The RAF and Soviet Red Air Force campaigns should be straightforward, but the German campaigns are more tricky. Other WWII games (independent of genre) generally shy away from changing the historical events, but we already have some latitude - the player's actions can change when a battle takes place, for instance. Most WWII games prefer to stick to the facts. Many Battle of the Bulge games end at the highpoint of the Nazi campaign, for example, rather than having the anti-climatic ending that would result from seeing the story through to the end of the war in Europe. I could use some external views on this subject.

It's still early days in this project, but it's already turning out to be a fun little game. It's going to be below the radar of most gamers, but hopefully it will find its way into the hands of a few players who will appreciate it.

I think you should allow people to win the war as Nazis, and have the final story screens saying that you have helped the most evil reign of the 20th century gain a foothold from which it will never be removed. You know, a "well done, but you have destroyed decent human civilisation".

I think fading out a story line just because some people might be (unjustifiably?) upset, especially in a small title, is daft and unnecessary. It's not as if you are advertising Nazism as a good thing...

On the other hand, it might be worth making sure that you sign the publisher up first. It makes no sense to have the game never released over the bad guys' story ending!

I agree with Neil. If the publishers get twitchy you can always have American drop atom bombs on Germany to tidy things up.