Portrait of a Type 3 Wanderer

Technically, there is no such thing as a Type 3 Wanderer player... when I talk of this, I mean 'a player whose preferred play style tends towards the Type 3 Wanderer archetype'. That said, I was delighted to read the following on Kim's blog (quoted from The Joy of SSX):

We talked, once, about why [SSX] was the only game she liked. I can't remember verbatim what it was she said, but I absolutely remember the gist. It was this:

That she never died. No matter what happened, she always got to the bottom of the hill. It didn't matter if she came in last, or didn't win a medal; the fact that she could always 'complete' the level meant that the game didn't make her feel 'bad'. She didn't feel she'd failed.

This is a great snapshot of the motivations for a player who would comfortably fit into the C3 (Casual-Type 3) subcluster of the DGD1 audience model. Dying or failing is discouraging for such a player - and games which expect the player to fail are generally not enjoyed. Since so much of the games market is focussed on games that produce "Hard Fun", and since fiero practically requires repeated failing (to demonstrate that there is adversity which has been overcome), most games manage to alienate this potentially significant market.

Incidentally, Kim's post was inspired by a post at one of my favourite blogs, Wonderland (how Alice finds all her pictures is a mystery!). Here's a quote from that:

One for paula, my flatmate, whose relationship with SSX is an interesting one. It's the only game she'll play. Don't ask me why. Not even Zelda appealed! Weird!

I'd like to point out that it's not that SSX is especially well designed for Type 3 play - it's just that snowboard games in general do not exert punishing failure conditions - one can feel a certain sense of reward simply for reaching the bottom of the slope. This is in part due to the fact that the game delivers mimicry and ilinx (vertigo) in its play, and so can be enjoyed for more than just agon (competition).

I have to say, personally, I like the mimicry and ilinx of 1080 Avalanche considerably more - for a start, it has squirrels! And as anyone who knows me will attest, I'm obsessed with squirrels. Here's a picture of a squirrel perched on my knee eating peanuts to underline that point: 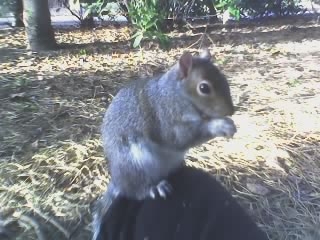 Yes, it has nothing to do with the post. That's how sciuraphillic I am. Check out the synopsis of my second novel if you need more evidence. Anyway, back on topic...

Kim's post goes on to talk about her own play needs:

[I] always play games on the easiest setting, and am a sucker for cheats; I lose interest as soon as the time required to build up skill to play the game is greater than the (usually very tiny) amount of time I'm prepared to invest in playing. The number of games that are compelling enough to be more fun than work when getting over the difficulty-spikes approaches zero for me; of the 40 or so games stacked up in my living room, I've completed... two? Three? Certainly less than 10%, probably closer to 1% of all of the games I've played in my time.

This is another great general description of the Type 3 play style. We associate this play style with practically a zero tolerance for excessive challenge. Agon and fiero (which the games industry is addicted to) are largely irrelevant - mimicry and paidia (spontaneous, unstructured play) are considerably more important. We say that the Type 3 Wanderer archetype is more associated with 'toyplay' than 'gameplay'.

There's a certain guilty pleasure here in that Kim was in the lecture that Ernest and I gave last year at GDCE, and so is aware of the concept of play styles. And she's right - we have found that game designers and programmers tend to prefer the Type 1 Conqueror and Type 2 Manager play styles, and so unsuprisingly the industry tends to support these styles of play far more readily than any other.

It's not just the game industry's obsession with adolescent male wish fullfillment fantasies and oversized novelty breasts which is blocking expansion to a wider audience... we need to learn about the play needs we aren't satisfying, and then find ways to make games which meet those needs.

Can I have those too, please? Just with some kind of easy mode.