There's a Hole in My Game Bucket, Dear Liza... 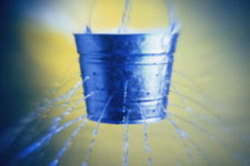 Piracy, second hand games... the games industry complains about a number of 'profit leaks'. But they seem to have forgotten that the single largest leak from their profits is excluding a large proportion of potential customers.

Alice reports on how Mark Rein complains about second hand games stealing cash from his company, and it's well known that the Japanese companies have disliked second hand game sales for what seems like forever.

I have always believed that this is an incredibly short sighted view. When a player sells a second hand game (pre-owned is the more common US phrase), nine times out of ten they use the money to buy a new game. For younger players, with limited cashflow, this is the only way for them to keep buying  new games (and thus contribute to word of mouth). The money from second hand games isn't lost to the games industry - it is reinvested. Access to second hand games increases the user base, grows brand loyalty and market share from people who would not buy a game at full price, and is the lifeblood of indie retailers who are an important link in the chain to Hardcore evangelism of new games. I was very pleased when well coiffured  industry analyst Nick Parker publicly announced he held the same views last year at an ELSPA conference.

Then there's piracy. Possibly responsible for losses of about 10-30% of revenue for a typical project. Except, as Chris Anderson reported on his blog, zero percent piracy isn't necessarily good for business. He says:

I was chatting with a former Microsoft manager the other day and he revealed that after much analysis Microsoft had realized that some piracy is not only inevitable, but could actually be economically optimal. The reason is counter intuitive, but intriguing. The usual price-setting method is to look at the entire potential market, from the many at the economic lower end to the few at the top, and set a price somewhere in between the top and bottom that will maximize total revenues. But if you cede the bottom to piracy, you can set a price between the top and the middle. The result: higher revenues per copy, and potentially higher revenues overall.

Plus, of course, piracy actually builds you market share - at the cost of loss of earnings. But if the pirates wouldn't buy your game anyway, there's no loss. You need copy protection - because you want piracy to be restricted to just those people for whom the effort of being a pirate (it can be a lot of work, I understand!) is justified because of their personal lack of purchasing power. As long as these people don't then sell on the pirated software, there's very little lost - which runs very contrary to conventional thinking on the subject. (Note to pirates: be a rogue, not a leech - share files with other pirates, but please don't resell them).

I understand why developers and publishers become fixated on these apparent profit leaks - margins are close. Developers could go under any day. But for some arcane reason, most companies in the games industry don't plug the single largest profit leak - responsible for at least 50% losses in many cases - possibly even as much as a 900% profit leak in extreme cases: failing to meet the play needs of the audience.

Not being gender inclusive (as Sheri Grainer Ray puts it) is a potential profit leak larger than the two usual suspects. Is it worth cutting your potential market in half by not taking this into account?

Designing a licensed game with the potential to be played by a very wide audience with core mechanics which will appeal to a very narrow audience (I'd estimate 10% or less of gamers in some cases) is an even larger profit leak, albeit a trickier leak to plug. Is it worth cutting your potential market by a factor of ten by not considering the play needs of the audience?

It's just another example of how we would rather take arms against the problems we can see, no matter how small they might be, than wrestle with the bigger problems that are just beyond sight. There a giant hole in the bottom of the game industry's bucket, but we're more intent on plugging the tiny leaks spilling out the side.

The cost of a new game is relatively expensive for a large section of the population. These people are unlikely to be able to afford buying new games regualrly, so trading-in or selling older/completed games can help finance new aquisitions. I cannot see a downside of this.