The Night Before Revolution...
Carcassonne 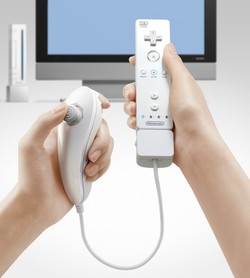 It's here - and it looks like no other interface device we've ever seen. Don't let the pictures of the remote control configuration fool you - that's the Casual configuration.  If you're reading my blog, the picture here is how you will likely use the Revolution controller to play a good number of games. It really does resemble nunchaku ("nunchucks"). Now I understand everything that has been said so far - why it is ideally suited to a Pikmin game, how it will support all the functionality of a current controller, and how it will reach out to people who are currently alienated by games consoles.

The nunchaku controller offers the following:

That's 11 dimensions of control - which is less than the 12 dimensions offered by the Playstation controller. But it should be manageable - you won't need to lose much if any functionality. And the Gamecube controller only offers 10.5 dimensions as it is, so it's certainly backwardly compatible with earlier Nintendo games on paper, at least.

And speaking of backward compatibility, who can fail to notice what happens when the main controller unit is turned upon its side... Yup, it's a NES controller! I don't actually know for certain that the controller can be used in this configuration, but it's certainly possible.

It's not clear to me how analogue shoulder functionality is to be maintained in terms of backward compatibility. Perhaps the under-button on the main unit is an analogue button; it might also need to have the analogue-plus click (1.5 dimensions of control) functionality. As long as they have one control with this set up, there should be no issue.

As predicted, the main unit does indeed have gyroscopic tilt sensitivity, which can and will be used for camera control. How to turn to look behind you is not yet clear, but there are two Z buttons, so one can be used for Fire and the other for Turn 180 degrees in a FPS style game, for instance. (Alternatively, look hard left or hard right and just turn around manually).

But of course, the real exciting aspect of the controller isn't the nunchaku controller at all (although I have to say, sign me up right now!) but the degree of precision offered by the three dimensional analogue controller.

Who can fail to spot immediately that games that previously could only be executed on a PC because of the sensitivity of mouse control now can be executed on consoles. RTS developers - prepare to have a console destination for your games, if you want one.

Let me say, I am thrilled by this controller. It supports sufficient dimensionality of control to be viable for all existing games (with no greater loss of functionality than with the Gamecube controller), it offers the most sensitive view control mechanism ever seen for 3D games. Furthermore, it offers the potential to run applications and games normally reserved for mice, and on top of all this its basic form offers an entirely new, intuitive and trivial to learn and operate controller. 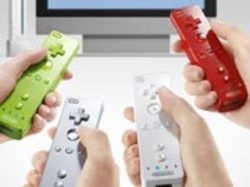 The  basic unit is so Casual friendly - it's not even as complicated as a typical TV remote - that it cannot help but aid in attempting to capture those players on the edge of games who have been forced out by the arms race of interface complexity. Oh, and

in case it was in any doubt, you can have four of them going at once. You can even have them in sickly green or garish red! Can I have one in the gay pastel green of the Gamecube Emerald controller please Nintendo!

This controller is, I believe, a genuine Revolution. Nintendo have everything they need to hit the Casual audience square on (except for Sony's "We are Cool" brand image), and all that remains to be seen is whether they can win back the Hardcore support that Microsoft bled from them with their harddrive. This will be a tough market battle for Nintendo but whatever happens, I don't think Nintendo are in danger of being forced out of the market in this next round of the console war.

Bravo, Nintendo, you have not lost your touch for innovative and ergonomic controller design.

Wow. It's just ever so slightly different from "normal" (and the fact that we can think of a controller as normal means we are well overdue this type of overhaul).

Nice one Nintendo, but I would like to try before I buy!

"(except for Sony's "We are Cool" brand image"

I imagine is is the reason for the new iNintendo stylings. If you can't beat 'em, co-opt 'em!

One aspect that sounds really neat is how it is the first one-handed controller I've seen as the system default. I'm intrigued with the idea of dual-wielding controllers - perhaps an action game like Zelda where you dual wield swords or something of that nature.

I'm not sure if I agree with you on ergonomics however - it doesn't look very comfortable to hold for extended periods, as rectilinear as it is.

"That's 11 dimensions of control - which is less than the 12 dimensions offered by the Playstation controller. But it should be manageable - you won't need to lose much if any functionality"

True, but you have disproportionate amounts of functionality in directional control. The base unit only has four face buttons, slightly bolstered by an additional two on the analog stick unit (is that an optional perhipheral to show off the expansion capability of the controller or will it ship with the controller by default?) Bad for games like Madden that need a lot of buttons, but good for platformers. I also wonder how good it really will be for an RTS game - with only a maximum of 6 hotkeys, will laser pointing be enough?

I also wonder about the casual player - while the design should certainly lure in new players, will the casual market be willing to buy a game system that looks nothing like a game system? I think getting people to try it will be an uphill battle, but once people experience it, the sell will be much easier (vice PS3/X360, where the expectations are already set and no hands-on experience is really neccessary.)

Early reports on the controllers suggest that you can sit with your hands on your lap, moving only slightly. It's not like trying to fly NiGHTS with an EyeToy, say. :)

There's no way it will reach the Casual's directly - but I'll wager that it can be sold to the Casual market in exactly the same way as the EyeToy was. "Here, you should try this..."

And I doubt the controller will ship with the analogue attachment by default, but it will probably be bundled with it in a lot of retailers. I'm betting Nintendo aren't so worried about the multi-platform games - the graphics will be more impressive on the other consoles, and Nintendo know most of the multi-platform sales will go to Sony anyway.

I agree that the dimensionality is disproportionately distributed - but isn't fast and accurate direction control the most important part of any interface device? If you can do that easily, you can rapidly select from shortcut menus.

For me, this controller design engages me more than the DS originally did - although I was eventually won over by the idea of the DS. Still haven't bought one, though. And it certainly engages more than the "Here's our console. It's the same as the last one, but more powerful and silver" approach. :)