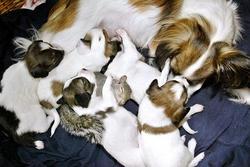 Dog adopts squirrel - cute photo results. My wife found this story for me, knowing that it would be of interest to me both for philosophical reasons, and because of my relentless love of squirrels. The essence of the story (originally reported in The Seattle Times) is that at an animal shelter in Seattle a pregnant dog named Giselle pulled a cage containing a squirrel named Finnegan closer to her - on two seperate occasions. Debby Cantlon, who runs the shelter, was nervous about letting the squirrel out, but eventually allowed the two animals to bond. The result? Finnegan has now been adopted as part of the litter. You can see him curled up and asleep in a pile of puppies in the picture.

Cantlon, incidentally, has cancer, and is one of many people who finds caring for and living with animals has theraputic value. I believe this sort of news deserves to be shared, especially since there is a tendency for us to let the news services report everything that is going wrong in the world - and in our new global village this acts as a lens, making the world appear a far worse place that it actually is. My wife suggested we could use a counterpoint to this side of the news -  a "Happy news channel" - and we subsequently found that there is just such a service, at happynews.com. 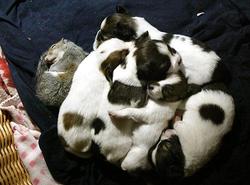 This story has personal relevance for me, as I always have a good relationship with the squirrels that live around me, and this has been a very important part of my life since childhood. I grew up in a menagerie with literally dozens of different animal species including dogs, cats, rabbits, chickens, tarantulas, ducks, tortoises, terrapins, and even, on one occasion, a kestrel. I miss having a dog the most, and my wife and I plan to adopt a dog when we next move house - but then the problem presents itself as to how to continue my relationship with squirrels after we have a dog. After all, the usual relationship between dog and squirrel is less than amicable.

The story suggests to me that it may be possible to have a dog and still relate to squirrels - although obviously there are a lot of questions. Can I train the dog to be tolerant of squirrels without the aid of maternal instincts, for instance.  Dogs are fully social animals, so whatever we lay down as the rules of the pack, the dog will presumably learn to accept. I could use more information from people with stories of canine-sciurine interactions, really.

The philosophical aspect of this story is that this is another example of an animal caring for another animal with no genetic advantage. The popular but disputed scientific field of sociobiology (which is less disputed than other fringe sciences because it is doggedly materialistic and therefore more compatible with the dominant paradigm) claims that animals care for close relatives because of "kin selection" - there is a sufficient crossover of genes with your relatives that you gain genetic benefits from doing so.

But the incidence of inter-species adoption is wider than most people would like to believe, as this doggedly materialistic account reports. Most mothers have no difficulty understanding why this would be so, but most scientists are desperate for explanations in purely Darwinian terms (including non-explanations such as "parental blunders" or "parenting practice"), which suggests to me that they have gone beyond the dispassionate agnosticism required for objective science and into adopting an expressly Darwinian belief system. I have no problem with this, because we are all subject to biases from our belief systems - but people should admit to such biases, in the same way that a Creationist should not attempt to hide their beliefs when they are reporting from their own unique perspectives.

“Many citrus tress that are natives of arid regions have sour fruit to discourage animals from eating it. The flesh of a lemon is there for three main reasons: to add weight so it will roll a long way after it falls from the tree, to dissuade foraging animals from eating the seeds before they can develop, and to supply water and nutrients as the flesh rots around the germinating seeds. The main aim of any seed is to propagate the species, not to feed the local animals.”
- Letter to New Scientist, Joanna Burgess April 1999 AD

“An ovate or oblong form is consequently the very best that could be adopted; and, moreover, the points with which it is covered and adorned, are evidently designed to protect the shell from external injury… At the same time a beautiful variety of tints evince that minute attention to the finishing and decorating of his works which the Deity so continually displays.”
- The Conchologists Companion, Mary Roberts 1834 AD

In both cases, the writer has already decided what the truth of the matter is - only the nature of the belief system they have chosen is different.

I believe "kin selection" and other sociobiological theories are misguided, although people are free to believe what they wish, of course. I side with Stephen Jay Gould and Richard Lewontin in believing that it is monstrously naive to presume that because we can concieve of possible reasons why a particular physical or behavioural trait might be a selective advantage, it doesn't follow that all physical and behavioural traits must originate in selection. In biology and in life, some elements are simply random artefacts - and we cannot easily know which is which. 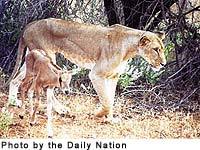 That said, I do believe that the capacity for animals to adopt outside of their species has something to tell us. The hearbreaking tale of the lioness who adopted a baby oryx and cared for her for two weeks before they strayed into the territory of another lion who took the oryx as easy prey shows just how powerful the instinct to care can be in all animals of sufficient complexity to be able to play (mammals, birds - possibly some fish, too). When life faces so much threat from disasters of all kinds, from starvation to earthquake and flood, it is simply a good strategy for life to be willing to co-operate. This is my belief, and I do not present it as science.

Animals are "vehicles" used by their genes for making more copies of those genes? Believe that if you wish. But still, dog adopts squirrel. That's real life.