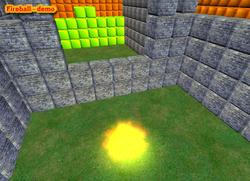 This is Fireball (or Hidama)  a game in which you play a ball of fire and set fire to objects made entirely out of cubes of various different materials. It's abstract, it's strange, but it's fun and different too.  The Japanese version of the title has the implication of a shooting star, which is apposite to the game, as you can drift around in the air before slamming satisfyingly into the ground to start raging fires.

Right now, Fireball is in pre-dev, and we'll be showing it to publishers for the first time next week. Designed as a budget market game for PS2 (although a PC version may also be made), Fireball is the first of our "verb games" which emphasise tight and easy-to-learn game mechanics with simple control mechanisms. The PS2 version is intended to be played with one stick and one button. Press once to jump, press again to slam into the ground and start fires - although you can also just push your fireball into things to start fires.

The first picture (above) is from a basic training level. You start in a stone chamber, with a gap in the wall low enough for you to jump out through.

A short way ahead is a wall of green blocks. These are the most combustible blocks in the game, and you can always burn these.

The wall is too high to jump, and inevitably the player will set fire to it, and the fire will spread to engulf the entire wall.

Once the wall has burned down a little, the player can get out and have a look further afield.

What can be seen is that the entire area is boxed in with wooden blocks.

Pushing up against these doesn't start a fire... there must be something else that can be done.

Sure enough, if the player presses jump while already jumping, they'll initiate a slam - crashing into the ground and starting fires hot enough to burn wood.

Burning the wood also increases the temperature of the fireball - meaning it can always burn wood from now on. (Also, because the fireball became hotter it can now jump higher).

Well, might as well burn down the whole wall while we're here!

In a matter of a minute or so, the wooden wall is completely collapsed.

Just a wooden tower that was outside of the wall. The exit is on top - and there's only one way to get it down.

That's the basic gameplay of Fireball, all centred around moving your ball of fire around an abstract landscape and setting fire to blocks of different materials.

There are numerous ways that individual Fireball levels can be designed. 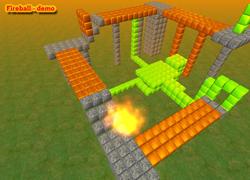 The  screenshot to the right shows another area which consists of a series of bridges made mostly of wood.

The problem here is that when you first get onto the bridges, you set fire to a green 'fuse' which in turn sets alight to the bridges.

You then have only a short amount of time to dash across the bridges and make it to the exit.

If you're too slow, all the bridges burn to the ground and there's no way to get across to the exit. Not to worry - you can restart each level as many times as you like.

This particular level isn't that hard once you know what you're doing.

In fact, completing the individual levels of the main game is not intended to be hard - anyone should be able to play with a little time and application, and progress is automatically saved after each completed level, so you can switch off and stop playing whenever you like.

The levels are short - taking just a few minutes to play. They are designed to be easy to complete - but hard to complete well. The number shown in the top right corner is a count of the number of blocks burning at any given time - the advanced player has the secondary task of working out how and when to start fires in order to get the highest burning block combo.

This is a game designed that anyone can pick it up and have fun with it - just watching the world burn is entertaining and fun. Although in early stages, we're really pleased with the way it's shaping up.

We are hoping to incorporate a number of levels designed by people outside of the games industry, so this is an open call for modders, amateur level designers, students and artists of all kinds to get involved in the level design process. Experience is not a requirement, and there is no minimum level of contribution. People currently employed by video game companies should not apply - there are legal issues. Your levels can be challenging, fun, pretty, strange... whatever you like!

Everyone in the external level design pool who contributes at least one level which makes it into the final game will recieve a level design credit. In addition, we planning to  set aside 10% of the royalities of the game to be divided between all of the level designers according to their contribution (so if you contributed 20 levels and the final game has 100 levels, you'd be in line for 2% of the royalties). Don't expect to get rich, though - this is a small project, and most video games never actually see any royalties. Still, if the game is a surprise hit, you would get your fair share.

Interested? Click here to email us [note: link now disabled]. Send us your name, age (no under 18's - sorry!) and no more than 100 words of persuasive text about your prior experience or anything else that might make us pick you to join the external level design team. We'd love to hear from you, but we can't guarantee a reply immediately so please be patient!

What happened to this game? Read the Play with Fire post-mortem from March 2008!

I'm getting a permanent error from that e-mail address this morning, Chris.

Thanks for pointing this out! I'd forgotten that for the purposes of spam management we can't just make up our own email addresses any more. :)

Sounds like an fun and interesting game. I'd certainly like to give it a go, and if i wern't currently employed I'd love to try building levels for it aswell. Good luck with getting it picked up!

I sent an email expressing interst in the external level desing to the junk@ihobo address, I hope its functioning now (10/30). This sounds like a title that might just do better in PC format via online distribution than in the retail PS2 venue.

By the way I neglected to add in the email that I'm 20. Thanks.

Actually, it would work well as a PSP game, as well as PC.