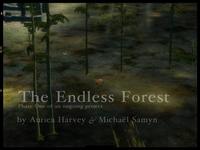 The Endless Forest is a massively multiplayer screensaver by Tale of Tales. It was all over the blogs a while back, mostly in the form of 'oh, this looks interesting, let me know if you play it'. However, since I have seen no-one actually comment on the nature of this unusual oddity, I'd like to present a summary of experiences with this virtual world.

I confess, I felt somewhat obligated to participate, because Tale of Tales are a client of my company, but it took me a while before I found the time to set it up. I met Michael and Auriea after last year's GDCE, where Ernest and I had been presenting together. Ernest had given them some free consultancy, but needed to refer them to my team as his by-the-hour services would have been prohibitively too expensive for their purposes. I had the pleasure of working with them on their inventive adventure 8, which sadly was not able to proceed.

Michael and Auriea are not like other people with an interest in games. I cannot resist the temptation to describe them as insane artists - in the same way that I would describe Keita Takahashi as an insane artist. The insanity I can probably muster, but I fear I lack the artistic vision to ever earn the same epithet. We've got along rather well - for a start, they share my interest in trying to create tools for play (toys and games) with the potential to reach a wider audience. They are particular interested in accessible interfaces and non-violent play, as am I. (Note to publishers: if you invested 0.1% of your turnover in insane artists, I predict you would see not only some growth in your revenue but PR benefits disproportionate to the cost). 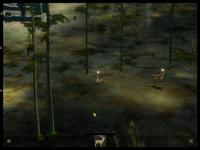 One of the first things people should ask about this game (I apply the word more widely than some) is this: why is this called a screensaver? Quite simply, this game has been designed to work in precisely that role.  Rather than demanding your continual attention, The Endless Forest pops up into your life effectively at random - whenever your screensaver would normally activate. This means that quite often you encounter the game when you have a free moment, and thus have a short while to amble in its beautiful landscape.

Your avatar in this world is a deer, and the actions you have available are appropriate to that role - you may call, listen, rub against trees (feels good!), sniff other deer, run like crazy through the trees, or just lay down and take a nap. There is nothing here for fans of the ludic, though - this is strictly paidia (unstructured play) and mimicry, and all the more original for it. There is or was a more game-like component in the shape of the Ename Ruin, although this was an art installation and is now concluded (you can learn about it from their website - sadly I can't link directly to the description of this). Doubtless there will be more in the future. 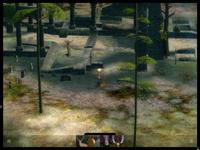 Mostly when I wake up in the forest, I listen for other deer, give a call to let them know I'm out there, then rush over to say hello. Often, they are asleep. I'll smell them, then curl up and go to sleep next to them (which is to say, I exit the screensaver and go back to work). Occasionally, I run into a deer who is awake, and we will exchange pleasantries and sometimes go for a run together. The other day, for the first time, I woke up in the forest and found it full of deer. It was a thrilling moment! I got to run in a herd of deer for the first time, which was utterly absorbing. But my deer tires easily, because work always calls.

This is the first multiplayer online game I've played in since my MUD days at university (when I used to rack up considerable hours online). The MMORPGs have not greatly interested me as they seemed to be little more than graphical front ends added to the crudest of the MUD paradigms. It's probably just as well that most MMORPGs haven't struck me as being that special, as I wouldn't have the time to play anyway. The Endless Forest isn't as big, expensive or expansive as the big players in this field, but it is special. After I got over the initial irritation of a screensaver that I can't dismiss instantly, once I began to relax into it, I began to see just how brilliant the model of a multiplayer online screensaver (a MOS, perhaps) could be. Don't give over your life to the game, let the game find the gaps in your life and offer you play.

In terms of audience, I believe you must have at least a trace of the Idealist temperament to get anything from the game, and you will need to enjoy Extroverted Play, as without this you will run out of things to do rather rapidly. It'll have a small audience, for certain, but I'm certain some people will fall in love with it. 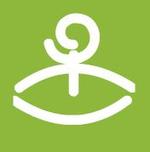 Yesterday, I stopped playing as a guest and registered. You get to choose a randomly generated glyph to be your 'name' in the world (for this is an entirely non-verbal world - Michael is annoyed by the intrusion of out of character speak in other virtual worlds; I sympathise). I looked at several hundred glyphs (no, I couldn't afford the time, but I became hooked as I could feel that the right glyph was there for me somewhere!) before choosing the one you see here - a spiral above an abstract eye... I really wanted the spiral to be underneath, but I am happy with this one. (Note to others: if you want an image of your glyph you need to take a PrintScreen image before you finish registering).

If you decide to take part, keep an eye open for my glyph. When you listen, the glyphs of other deer appear at the border of the screen so you can see where they are with respect to you; an elegant and simple mechanic for finding others. If we should meet as deer in this charming alternative reality, perhaps we can go for a run together, deep in the wonderous woods of the Endless Forest.

Thanks for the reminder about this. Given that I'm only ever in Windows for a specific and focused purpose, my screensaver never manages to kick in. Fortunately, I see they have a launcher as well.

See you in the forest!

Forget World of WarCraft! I'm all aboard the world's first Deer MMO.

Thanks, Chris, for the lovely article. I'd like to add that this is the first phase of a bigger project. And although we do very much love its current minimalist design and will most certainly stick to it as closely as we can, we will be adding some elements in the next phase that are more ludic. Nothing very challenging, though, as our focus is on pleasant togetherness and we want to avoid competitiveness as much as possible.
But the first addition will be live performances. Expect the unexpected in February! ;)

This is one of the extremely rare occasions when I regret that I am no longer a Windows user. I've no idea whether this game would have held my attention (you know what a gadfly I am) but I sure wanted to go for a gambol.

I know this seems to be an older blog, but perhaps you could shine a light on my confusion. I've just recently happened upon this game, and cannot for the life of me figure out how to install it correctly onto my computer. I use windows vista, and for some reason I can't find the launcher version, and can't set it to be a screensaver because my computer hates me T.T Any help at all would be much appreciated. ~A so far unexisting deer

Nanna: You need to ask at the forum for the game. Go to http://tale-of-tales.com/TheEndlessForest/, then select 'Forum' from the list of options on the right, then select 'Forest problems and bugs'.

You can check the frequently asked questions to see if helps. For Vista, I note that it says the following, which may help you:

Q: "ForestViewer.EXE has stopped working" on Vista?
A: Deactivate the DEP.
To deactivate DEP, go to:
Control Panel -> System -> Advanced (or extended, don't remember the translation) -> Performance -> Settings -> Data execution prevention -> set to "activate DEP only for windows programs and related services".
Make sure you are running the computer as the Administrator.