The Endless Forest
The Diversitarian Movement 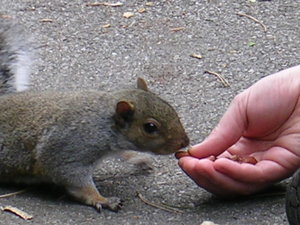 One of my favourite ways to spend an idle day is to take a trip over to one of the larger parks or reserves in my local area and to spend some time with the grey squirrels. British parks support a larger population of squirrels than a similar area in the countryside because of the number of visitors who bring nuts to feed them. This keeps them well supplied during the warmer months, but during the winter when park visitors are less common, they have to rely on buried supplies - so during autumn (when these photos were taken), stockpiling is the chief activity. (Park squirrels share the stockpiled supplies; their home ranges inevitably overlap, and sense of smell, and not memory, appears to be the chief way of locating buried nuts).

Although in general you should not feed wild animals, as they can become dependent upon handouts and lose the ability to fend for themselves, there is no harm in feeding urban squirrels as they are already somewhat reliant on humans for their food, being partly domesticated. In fact, when food is scarce, urban grey squirrels are forced to raid people's trash, so it is better for everyone if park squirrels are kept comfortably fed. (Similarly, many bird species are dependent on handouts during winter - especially in the UK - and there is no harm in leaving out food for them). 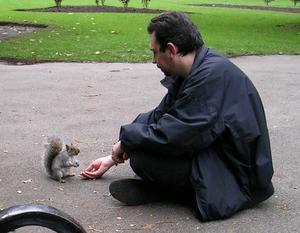 Grey squirrels in an urban environment do not tend to see people as a threat, but in common with many small mammals and birds retreat at speed from fast moving objects - if you're six inches tall, a fast moving object is likely to be a threat, and you can't afford to take the chance. As a result, befriending grey squirrels in a park is largely a case of being willing to sit still. You do not have to be motionless, but no sudden moves helps them come to trust you. Also, sitting on the ground helps - it reduces your height, which makes you seem less like a dangerous giant. Grey squirrels have a relentless curiosity, which means they will always come and investigate you, given time - you just have to convince them that you're a friend - or at the very least, something non-threatening which is giving out food.

Because of their tendency to retreat from anything moving fast, grey squirrels play dominance games based upon chasing each other. If a squirrel feels a rival has moved in on their territory (and some will see you as a part of their territory, while you are there), they will rush towards them - causing the interloper to scurry off. Chases often ensure, as the two squirrels rush at breakneck speed towards each other, often taking labyrinthine paths up and across trees. In general, they never actually touch or harm each other. The chase is what it's all about; there's no need for direct violence (although some scuffles do break out from time to time). Not all squirrels feel the need to exert dominance in this way; many are content to share space with their relatives and neighbours. 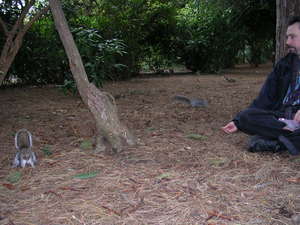 Squirrels don't like being touched, but will tolerate the odd bit of contact once they trust you. Conversely, they have no qualms at all about climbing on you - provided they trust you a great deal, and ideally when they are emboldened by being in large numbers. A lone squirrel isn't always certain what is safe, but like many animals they feel much more comfortable when there are more of their kind around them. This can even lead to dominance games in the form of dares - I can climb this human, and you don't have the nuts to do it! The day my wife took these photos, the squirrels were much too busy burying supplies for the winter, and hence I couldn't keep their attention for very long.

I'll leave you with this Quicktime movie of three squirrels taking nuts from my hand. If like me you are fond of squirrels, I encourage you to make the effort to take some nuts to your local parks during the winter - not only will they appreciate the meal during the leaner months, but they will be much more willing to relate to you, as hunger emboldens the most timid of beasts. Happy feeding!

Great story! Thanks for the link! I used to live just up the road from Brixton, and I confess, the squirrels there were very friendly - I certainly never got attacked by crack squirrels! :) I had a regular visitor who would come up to my door and put his paws on the glass and look to see if I was there, though.

You're the nut. They're teeth are like razors and they don't know the difference between food and your finger.

Stu: in over twenty five years of feeding squirrels I have only been accidentally bitten once, and that was when feeding at twilight. During daylight hours, I have had no problems.

If you start with a nut held between two fingers, their keen sense of smell will lead them to the nut, and not your finger. Later, you can rest nuts in the palm of your hand and let them take them out at their leisure.

It is true that if you have been handling nuts they can mistake your finger for a nut and take a nibble (because of the faint scent of nuts) - but if you ensure that the nuts are prominent, they are more than capable of working it out in my experience.

If you have had bad experiences feeding squirrels, I would love to hear what happened! (And where).