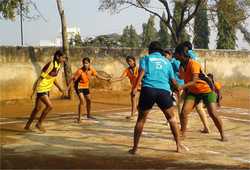 What's at least 4,000 years old, fast, energetic and exciting and practically unknown outside of Southern Asia? The game of kabaddi.

When my business associates asked me if there was anything that I wanted to do while I was in India, there were two things that immediately leapt to mind: firstly, I wanted to see temples (and churches and mosques) as I always try to visit places of worship when I travel. Secondly, I wanted to see a kabaddi game.

What is kabaddi? Broadly speaking, it's a sport which is similar to the playground game of tag, but with considerably more skill. A brief summary of the rules are as follows: two teams of seven players (with another five in reserve) face off on a rectangular pitch, which resembles a tennis court. There is a centreline, tramlines along the length, and two other lines parallel to the centreline near the back end of each half.

The game plays as follows. One side sends a raider into the enemy half, and attempts to tag (touch) as many players as possible on the other team.  Once they have done so, they attempt to return across the centreline. If the raider makes it back to their own territory, they score one point for each player tagged (and those players are temporarily 'out'). They must complete their raid on one breath (or 40 seconds), which they signify by chanting 'kabaddi' repeatedly. Officials check that they do not draw a second breath. 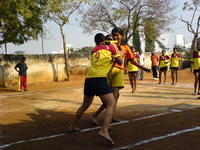 Before the raider tags anyone, the defending team obviously does what they can to avoid being touched. But once they have been tagged, they attempt to grab and restrain the raider to prevent them getting back over the line. Officially, they must hold the raider until their breath runs out; pragmatically, however, most raiders know when they are overpowered and take a breath, allowing the officials to call them out (scoring a point for the defending team).

This leads to some of the most dynamic elements of the game, as there is a role for all manner of different body types. Small and fast players can use their agility to rapidly tag and escape across the centreline without being touched - or to chase a retreating raider into their own territory and catch them by surprise. Conversely, larger or more muscular players can attempt to steamroller their way back across the line - sometimes dragging the defending players back with them! (I saw this happen once in a televised match; a player on the Armed Forces team literally dragged the enemy team back across the line, scoring big points!)

As mentioned, players who are tagged (or raiders who are caught) are out and score a point for the other team. Each point scored also puts a player who was out back into play, so there is an ebb and flow to the number of players. If one side gets the whole of the enemy team, there is a bonus of two points (a lona) and the team is back in.

The game is played in two halves of 20 minutes; the team with the highest score at the end of play wins.

The match that I went to was specially arranged for my benefit by K. Jagadishwer Yadav, the General Secretary of the Amateur Kabaddi Federation of India (the AKFI), to whom I am enormously grateful. The AKFI was playing with some additional rules I hadn't encountered before, although nothing that alters the basic elements of the game.

The girls who played were exceptionally good, raiding and defending with confidence and team spirit. It was close, but the side that eventually won had shown slightly superior form throughout - in part through the efforts of number 6, whose confident attacks and powerful returns marked her out as an exceptional raider. There were also some great small and agile raiders who ambushed some of the retreating players and caught them less than a second after returning to their half.

The girls were playing in their school shirts, so you cannot tell from the pictures who is on which team. This doesn't actually matter, of course, because there's only one raider at any given time, and it is readily apparent which player that is at any given time. The holding of hands, which can be seen in some of the photos, is a tactical measure: not only do pairs of players have greater physical strength in terms of stopping a successful raider, but they also have less risk of being caught by surprise (two sensoriums keeping watch!), and can surround an escaping raider to encircle them.

This kabaddi match was the highlight of my trip to Hyderabad, which is no small claim as many people went out of their way to make me feel beyond welcome. Not only was the game a joy to watch, but the pitch was just on the edge of the city, and the trees and walls were alive with tiny squirrels (resembling chipmunks) which chased and wheeled in an arboreal kabaddi match of their own! 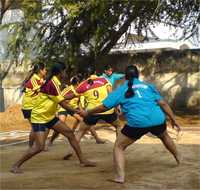 This sport is not greatly well known outside of the Indian subcontinent, which is a great shame as it requires essentially no equipment to play, is excellent exercise, and anyone can find a way to turn their body type to an advantage in play. If you are from a South Asian bloodline, I encourage you to teach it to your children as part of your cultural heritage, and even if you are not I encourage you to learn the rules of the game simply because it could use support, and its great fun!

I first learned of the game when Channel 4 aired a season of the Indian national league in the UK in 1991. They only did so for one year, alas. I was hooked, but I have no means of following it now as even the narrowcasting channels don't televise it. It's a sad fact that because sports are cultural artefacts, it's hard for them to succeed outside of their cultures of origin. I hope that kabaddi can grow its popularity by being part of the Asian Games, and eventually take its place as a major global sport. Until then, I'll just have to enjoy it whenever I can.

With grateful thanks to Mr. Yadav and the AKFI, the players who put on the match, and the officials, not to mention G.V. and Rajesh for setting events in motion - many, many thanks!

What a fantastic sounding game! It seems to resemble our Dodgeball in some ways, but without the need for balls and considerably greater play depth. Thanks for sharing and glad you had such a rewarding trip.

You can find some short video clips of guys playing Kabaddi here:

That four-chain tactic seems to be pretty popular, there. I didn't fully grasp what was going on until I tried to explain it to someone else - that's really cool, how these neat emergent tactics grow out of a pretty simple little set of rules. Love it.

We represent a non profit, non governmental organization called 'Aashvaasan Prathisthan' which is located in Mumbai
( India ). Our area of activity involves an educational and social support system for rural and urban children. Recently we have started a promotional educational literature for children pertaining to various topics like science and technology, contemporary research, humanities, sports, environmental issues, entertainment and sometimes we need to refer to the material made available to us through various sources. During our research we came across your website which we found relevant for many of our subjects. We would like to refer and project some of the material in our articles. Kindly let us know if we could do so with due acknowledgement.

Chandreyee: I have contacted you via email to discuss this further. Best wishes!

I am working on a museum exhibition of South Asian life. I like your kabaddi photos and would be interested in using one in the gallery. Would that be possible?

Yes, be my guest! If you need formal permission, chase me down by using the contact link at ihobo.com.

Hi, my names alex and i am a sports development student at Liverpool John Moores Uni. I have been given an assinment to make a kabbadi mini game pack to enable children of all ages and abilities to participate and learn the rules like mini tennis ect which have been very successful. Could you give me any help or advice? If i can design an affective model i would happily email it to you for further use.

Hi Alex: what an exciting project - and how wonderfully bizarre that this post should put me in a position to comment upon it! :)

You should probably contact the England Kabbadi Federation and ask their help:

But do let me know how this project turns out!