The Anarchy of Paidia
Reptile Play

What I Did On My Holidays

Well, I'm back to work and back to blogging... I'm not going to have a great deal of time to blog this week, and next week I'm in India giving a keynote at the NASSCOM conference in Hyderabad and furthering my business connections in the country, so who knows if there will be any bloggery pokery then. There are various interesting things waiting in my blognebula, and a few slightly insane ones; they will emerge in due time I'm sure.

Over the Winter Festivals I have had nothing to do with games whatsoever (apart from completing the flight school in San Andreas for a friend who was stuck on one task and dearly wanted the attack helicopter). However, I spent my birthday (January 1st, which has the benefit of always being a holiday) creating the hexes for my Black Sun boardgame. This was a marvellous way to spend the day, and the finished result is leaps and bounds more attractive than any boardgame I've made before. 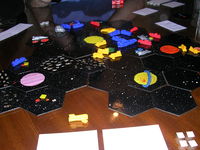 Here's a picture of the hexes in action, along with the Fimo playing pieces I crafted a few weeks back for the game. The hexes were spray painted black with a plastic-based paint, flecked with white paint to create a starfield effect and then handpainted by myself, my wife and my friends with the planetary and other bodies necessary. Finally, the hexes were varnished to help protect them from wear and tear.

The game itself is unusual and deserves some brief mention. Each player is assigned one of six different faction cards, which assigns them a fleet of ships, varying from nine ships in the case of the Alliance General (blue), to a single ship in the case of the Lone Smuggler Captain (purple). Each faction varies in its scoring mechanics, and each ship has different properties, but these are the only traits which define the game.

In essence, Need and Crisis tokens appear on the board at certain planets according to a die roll (akin to the resource roll in Settlers of Catan). Needs represent economic opportunities - factions such as the Smuggler Captain, the Gang of Brigands and the Syndics of the Merchants Guild score points for going to planets with Needs and removing the token. Crisis tokens represent political instability - factions such as the Alliance and the Rebels have a vested interest in control of planets undergoing a crisis, while the Medics Guild scores for removing Crises. Most factions also have additional scoring conditions - the Brigands score for raiding Transports, for instance.

Because the factions are different in each game, and the board is different for each game, the tensions and play of each game are radically different - for instance, the role of the Alliance varies according to whether or not there is a Rebel faction as well. And even if no-one starts playing the Rebel Commander, players can change their faction during the game by adopting one of four different faction cards as their 'new' alignment - Allied, Rebel, Rogue and Hunted. These faction cards are essential because of the dynamicism of the core play: players can find that their scoring conditions are slower than the pace of the game, but strategic switching of factions allows the player to acquire new scoring methods.

Another unusual element is that some of the ships are 'indestructible'. For instance, the Lone Smuggler Captain gets only one ship (the Black Sun of the games' title), but this plucky freighter cannot be destroyed. Instead, after a lost battle it is captured, causing the player to miss a turn. This causes this faction to play in a radically different manner to, say, the Rebels - whose eight ships are fragile, and once destroyed remain gone forever. I haven't played the Smuggler yet, but I'm looking forward to it. 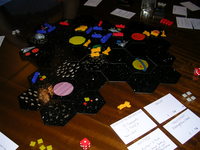 I'm thrilled with the way the game plays. It has a hint of the complexity of decisions inherent to a hobbygame, but is coupled with an accessible storytelling element which allows players to enjoy the natural play of the game if they prefer. The extreme asymetry of the pieces creates unusual and dynamic play, and best of all the game takes only 30-90 minutes to play.

It is a secret truth of boardgame design that the shorter the play time, the more likely the game is to be played. The world is littered with the bones of boardgames which take more than two hours to play - I really enjoyed the Dune CCG (which I bought wholesale for peanuts as it didn't sell very well), but it took eight or more hours to play a game - who but a student has the time! The phenomenal success of Magic the Gathering is rooted in the fact the game can be played in less than 30 minutes (although this is not the only factor, of course).

There's no doubt in my mind that my game design skills have continued to improve over the years. Looking back at my older boardgames there is much of value (and I know some of my friends miss the highly agonistic play I used to focus upon), but there were also numerous problems which I did not see as such at the time. I might at some point write a brief history of my unreleased boardgames; I'm not sure if this would actually interest people or not, but it would be nice to have a record of them before my neurons go soft and I forget everything.

Brief thanks to Snarkmarket and Nongames for trackingback to the Paidia post. I'm delighted that  the latter site exists (all hail diversity of play!) and the former site has the most beautiful blog design I've ever seen - it makes me feel guilty for reading the artless RSS feed!

I wonder if I have time for a quick trackback of my own before I have to get to work...

Having come across your blog entirely by accident (all praise t'internet), I was delighted with this post as it engendered nostalgic memories of playing Corruption with you in Streatham. In that light, I encourage you to write your history of self-designed boardgames!

Surely there's a way you can publish Black Sun online in some manner..?

Angels and ministers of grace defend me - Fred! Wow, what a real blast from the past! I fondly remember coming out to visit you and the guys at Jodrell Bank to play Magic the Gathering. It was a great group - as everyone was far more interested in building interesting and entertaining decks than actually winning. :) I still have my Spoon of Doom card! :D

As for publishing Black Sun, I'm not so interested in videogame versions of boardgames, since I work on videogames seven or more days a week - I like to keep the tactile world of hobbygaming in a seperate and honourable place.

Let me know if you pass through Manchester - would love to have you over for some boardgames at some point!

Well, my ethos has always been: what's the point of winning if it wasn't fun at the same time? It probably contributed to my dismal tournament record and ultimate abandonment of the game in the face of a ludicrously un-fun tournament scene.

I'm due some extended time up-north at some point this year, so I'll be sure and look you up.

Maybe, if you don't intend on selling the game, you could post the rules up as a blog entry (then you can get feedback from external sources too :)).

I would love to give the game a shot and I'm sure my wife would be happy to join me (plus some other friends we have).

Also - would you maybe be able to blog on some of the development/design issues you had while making the game? I am really interested in board-game development (not for profit - just a general desire for knowledge and maybe a future game).

I could post the rules to the game. But it's components are quite esoteric! I guess you can mock up the tiles on the back of Settlers of Catan or Fantasy Flight hexes (as I did in prototyping), and I suppose you can cobble together the pieces from other sources by some means.

That's what I was meaning (the whole 'make-it-yourself' thing).

I'm patient, but thanks very much. It would be very interesting to see :)