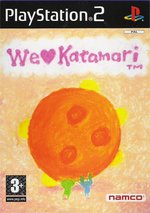 I hold in my hand a copy of the European release of We ♥ Katamari, which I just purchased from my local independent retailer (thanks Faisal!) Rumours that EA were going to handle the European release of this game seem to have been a PR stunt, as it's clearly Namco doing the honours for its cult hit. It's not really surprising. The US release of the first game only sold about 500,000 copies - although for its development budget, I'm guessing that was profitable. Not exactly something EA is likely to care about for anything other than publicity.

A brief gush in praise of Namco... Just for hiring Keita Takahashi, they deserve approbation (please let him create a new franchise now!) but I must also thank them for sending Toru Iwatani to the last two GDCs. I am disappointed he will not be there this year. His talk two years back was the most inspirational speech I've heard as a game designer, and I continue to derive wisdom from it.

Although I'm sure many of you are sick of me complaining about the delays in European release dates, I just want to briefly share with you what it's like to be a UK gamer. Those of you who live in the US could enjoy the game on the 20th September 2005 for the very reasonable price of $29.99. Four and a half months later and we have it in the UK (despite it requiring no additional localisation) at a price point of £37.99 - which is $66.99 based on today's exchange rates. Yes, we get it almost half a year later at more than twice the price. Is it any wonder that I complain?

Incidentally, guess how many copies my local independent retailer was sent of the game... One. Yup, they were sent a single copy, which I bought. This is definitely a release on the fringes of the economic landscape! I have opted to pre-order my copy of Shadow of the Colossus, which is out in a fortnight, just in case it is similarly under supplied - but given the modestly colossal marketing drive that Sony is stumping up the cash for, I'm guessing that will be better supported.

Now if you excuse me, I have to tie up my work and rescue my wife so we can get some katamari rolling in before our friends arrive this weekend for our Superbowl XL celebrations. Any excuse for a poker party!

EA distributes most of Namco's stuff in Europe, including this. I can confirm it's they who're releasing it, as my review copy came on an EA-marked disc (with strict orders to return to their mastering lab, as always with those guys.. sigh). :)

But I agree that this isn't something EA would typically be interested in, and I think that's why we never saw the original over here. And probably why your retailer only got one copy...

Anyway, nice game. Not worth the insane scores some sites have been giving it (8/10 should do), but definitely nice.

Ouch on the exchange rate... but as a gamer Chris, these next few weeks with We ♥ Katamari (extra points for the ♥ character!) and Shadow of the Colossus will be joyous for you indeed. Looking forward to the coming blog posts--I especially hope you and the wife have a chance for Katamari co-op, it's a joy!

Thanks for clarifying this fluffy bunny! I was suprised not to see an EA logo on the cover, hence my comment. I'm glad the sites are marking it up - it needs help to be noticed. :)

I'm certain my wife and I will play the co-op, Jack! How could we resist! :)

As for the Superbowl, yup, I think I'm going to have to back the Steelers this year, psu. Should the Seahawks even be there? >:->