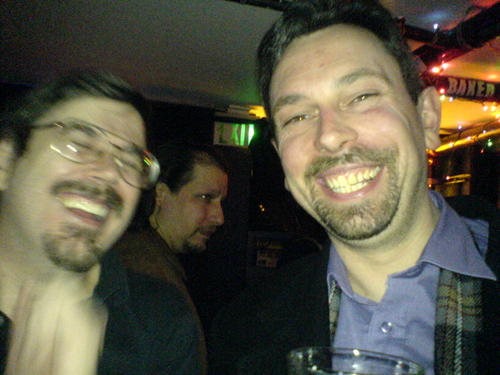 That's me with a slightly blurry Steve Jackson (of Steve Jackson Games) at the Manifesto Games launch party. Steve is my game design hero, having run a small but beloved independent tabletop games company for 26 years without feeling the need to sell to Hasbro. We'd spoken before over email on several occasions, but had never met before this night. I was about to leave (jetlag and alcohol all but knocking me flat) when Steve walked in. It made my night.

And yes, that is Greg Costikyan himself (founder, CEO and figurehead of Manifesto Games) lurking in the background. What an awesome night that was - they even had a Ms. Pac Man table! My unbounded thanks to Eleanor from Manifesto for setting it up!

Steve Jackson's scheduled to be at Conflux here in Canberra this June; I still haven't got round to getting some Munchkin T-shirts for him to sign.

Chris, you forgot to mention the girls having sex with each other in the bathroom. I couldn't believe it, I got my beer and right next to me, these two girls are going at it. Only at the Manifesto party people.

When I turned to see they were gone, I reverted to a 14 year old and peeked into the girls room, where I saw under the door of the stall a pair of legs, still clad in teal tennis shoes, locked around a shiny white rump, wiggling in rythmic motion like guitar hero with different licks. I spoke with Richard Garriot that morning, but in a very real way, that was the experience I'd been waiting all my life to have.

Patrick: I'm not going to report on something I didn't have any direct experience of! :) Even if I had witnessed this, my quaint British politeness would have required my discretion.

In the unlikely event I would choose to mention such a thing, and it is unlikely that I would, I suppose I would say something like: "The atmosphere was alive with the spirit of freedom and licentious abandon." rather than "I spied on two girls having sex in the bathroom."

I mean, seriously, dude, where are your manners! :-D

Yeah, manners man! Where are the photos! ;-)