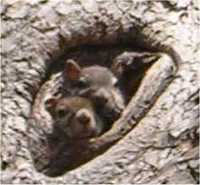 If ever there was proof that I need to invest in a digital camera with a decent telephoto lens, it's this photo. The idea of squirrels curled up within a hole in a tree is enduring, and has been popularised by some animated cartoons. But one rarely actually sees it. There were at least four young squirrels sharing this fortuitously discovered drey with their mother (pictured here above one of the babies); it was situated about four metres up the tree. The litter was probably born over the winter, and were just emerging to view the outside world as spring began. The tree in question was in the middle of a street in Knoxville - actually a rather safe place for squirrels, as few predators cross the street except when necessary.