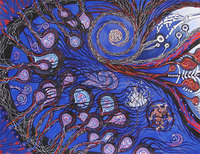 This is pure speculation.

Artificial neural networks were inspired by biological neural networks found in brains. Brain function, cognition and consciousness are all many orders of magnitude more complex than mere neural networks, so when I speak here of neural functions it must be understood that I am talking of a small subset of our hypothetical mental toolkit.

I am not an expert on biology, but I studied artificial neural networks in some depth as part of one of my degrees (albeit many years hence - I don't claim to be up to date on the field!) Here are some key properties:

I am identifying these two functions of neural networks - processor systems and memory systems to speculate a connection between two of the four temperaments in Temperament Theory, namely Artisan (Tactical skillset) and Guardian (Logistical skillset).

(Incidentally, I contend that one way to look at Temperament Theory is to consider not which of the four patterns is paramount for an individual, but to determine which Sensing pattern  - Artisan and Guardian - is paramount, and which Intuitive pattern is paramount - Rational and Idealist. This is just another model; pay it no especial heed. I mention it to explain that one can decompose Temperament Theory in certain ways).

The Tactical skills of the Artisan temperament may draw from the power of processor systems. People who strongly express Artisan have especial competence at, among other things, machine simulations - this might reflect the influence of processor systems in their neural architecture.

What of the remaining two Temperaments of this model? Both are dominated by the Intuitive function, whcih I believe might be related to the degree of interconnectivity in biological neural networks. Greater interconnectivity allows for signals to cross pollinate (I relate this to intuition) - but it also causes crosstalk which confuses one signal with another (I relate this to paranoia and schizophrenia).

Although I have no firm hypothesis for the value-oriented bias of the Idealist versus the logic-oriented bias of Rational, I believe both might be related to a higher degree of interconnectivity between neural networks - that is, whereas Artisan and Guardian represent the strengths of isolated neural structures, Rational and Idealist might represent interconnectivity of neural structures. Thus:

But this is pure speculation.

An Exercise for the Reader

Nothing contained in this post should be mistaken for truth or Truth. Thank you for respecting my right to speculate.

The opening image is Cosmic Neural Network, by Shoshanah Dubiner taken from Cybermuse. As ever, no copyright infringement is intended, and I will take the image down if asked.

Heres some speculation for you, intuition works roughly as you describe, but with an essential subtlety: quantum computation. In the mitochondria of every cell quantum effects can psuedo-randomly alter the precise magnitude of voltage that acts as the firing trigger. While minute, these slight differences, when added up over a batch of processors, constitute a non-trivial adjustment, which, when combined with logical recursion (the memory based sequencing of these sensations, which operates in a way similar to an evolutionary algorithm) this effects a "honing in" that procudes a keen inference, occasionally without adequete information to make an rational inference in the bayesian sense. If you want to take this a bit further and factor in quantum non-locality, its possible that alterations on the sub-nueral level can be effected from causes outside the brain itself, which would account for ESP and "inspiration" in general.

But the truth of those wild speculations is irrespective of the recursive batch algorithm I'm proposing is the mechanism for intuition.

Strategic thinking then asks "what is the best pattern given this structure" and infers that by honing in on succesively better pattern. This is facilitated by hueristics, which are sequentially enumerated bits of memory.

I have remained very interested in the various hypotheses attempting to tie quantum effects into consciousness (Penrose et al). The fact that they exist at all, and thus provide a theoretical framework for psi/anomalous information transer further embarrasses the scientific community in their rejection of psi research which (although I remain agnostic) is well founded in terms of its scientific framework.

I have mentioned before, for instance, how the only remaining objection to the Ganzfeld experiment is to reject it on the basis of prior beliefs - i.e. to make the same logical error of the Creationists. Nonetheless, this is the prevailing attitude.

It seems Kuhn was spot on in his assessment of how the scientific community develops its paradigms, but scientists themselves have yet to fully understand how much this undermines the philosophy of positivism (crudely: "science as Truth").

Scientists need to stop attacking what they see as external threats, like Intelligent Design (which is no threat to science at all) and get their own house in order, because right now it's in a shocking state of philosophical disrepair.

An interesting article, especially the exercises. Here are my answers to few points:

2. I generally have a good memory - I think so myself and have heard it from others. I'm especially good at remembering trivia and minute details. Dates, times, numbers and overall properties of things are easy for me to remember. Strangely, I'm not that good at remembering faces or names. Some faces I remember instantly - others seem to belong into a certain group of generic faces which haven't got much distinctive properties. It usually takes me two or three times dealing with a person to remember his or her name. However, even that varies person by person. From seventh to ninth grade I had the same teacher for chemistry and physics. I saw her several times every week. Still, I never learned her name and don't remember it even now - despite having read it several times.

I can't really analyse how my memory works. Usually when I think of a thing I have to remember, it's just there. Before trying to remember something I also usually know (perhaps intuitively) if I'm going to remember it or not. Some times ago I felt it even more drastically when I forgot where an important document was. I had an inner feeling - it felt as sure as knowledge - that if I took everything easily and backtracked and thought about where it could be (instead of panicking), I'd find it. First I panicked for about a day, then I tried doing that. It worked.

The weird thing is, I didn't know that as a general rule. I knew it as a solution for the specific situation. It felt as though I hadn't really forgotten where that paper was - only that I was required to react in a specific manner to fully regain the memory in my consciousness.

4. In my opinion I think very logically. I know this doesn't sound modest, but it isn't meant like that. I understand logical thinking as being able to recognise cause and effect. That is also what I strive for.

5. I also think abstractly and don't find it particularly difficult to explain the experience: thinking abstractly is finding common patterns in things and phenomena not necessarily related to each other. Deducing these common characteristics makes it possible to reduce them in a specific situation as rules by which prognose probable consequences and implications, provided that those generalized thoughts apply to the specific case.

Alfred: thanks for sharing your perspective here! This piece is old, and my perspective on brain function has moved on since this point. A more recent perspective can be found in this piece on Deconstructing Temperament.

I don't think it is immodest to say that one thinks logically. People who express Rational - and I'm betting, given that you were able to enjoy this post, that includes you! - tend to think logically, and are one of two temperaments associated with abstraction. (I'm still at something of a loss to identify neural mechanisms for the other abstracting Temperament, Idealist).

Thanks for sharing your viewpoint! Interesting to see someone respond to the exercises after three years. :)