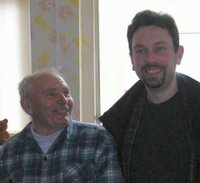 Earlier this week, I received news that my father had suffered an accident while on holiday in France. He’d fallen out of a loft, and suffered head trauma. He was in a coma in the hospital, but when the doctors ran their tests there was no sign of higher brain functions. He’d already gone. He would have been seventy this December.

It’s a shock of course, losing a relative always is. But in some respects, it’s not as distressing as it could have been. We all have to go sometime, it is inescapable, and I feel he would rather have gone like this – in a random accident, being the same indomitable spirit he had always been – than to fade away in a hospital. We had to go through that when my mother died of stomach cancer, and it was especially hard for him as he wasn’t raised to share emotion openly.

As a young man, he worked with seaplanes and boats while stationed with the RAF, first in Ireland working with Sunderland flying boats before being stationed in Singapore in the late 50’s. At the time of the Cuban missile crisis he was in Gan, a tiny island in the Seychelles, south of India; a refuelling base for the southern ocean passage. It was all a grand adventure to him. When he mustered out, he took a number of different jobs before meeting my mother and starting a family.

We moved to the Isle of Wight before I was one year old; they were building Stansted airport near where we lived, and my parents didn’t want to live in the shadow of jet planes. So I grew up in the bucolic splendour of a small rural island, just thirty miles across. It undoubtedly secured my love of nature, and as a family our house was overrun with animals – at one point we were living with more than two dozen different species.

As a coastal tourist destination, we had many amusement arcades and piers when I was a young boy. Several burned down in mysterious fires as I grew up; I guess it wasn’t as prosperous a living as it could have been. My Dad loved taking me to the arcades to play. He was in charmed admiration of my competence at videogames, which is a wonderful thing for a father to offer a son. He genuinely enjoyed watching me play arcade games, as they were too fast and demanding for him to enjoy himself.

For several of my birthdays, he took me across to the amusement park at Southsea, just an hour’s ferry ride across the Solent. It was the site of the largest amusement arcade for hundreds of miles, and it was always a great pleasure to go and see the new games. I first saw the 1983 Atari Star Wars cabinet there – it was a sensation at the time, and it was several years before any of the Island arcades could afford one.

My father was a Christian in the same manner as John Waite’s character of John Walton Sr in The Waltons – doctrine mattered little to him, and he was not a regular in Church, nor did he belong to any particular denomination. Rather, his Christianity defined his moral and ethical world. It encouraged him to travel to Africa in the early 1980’s to build hospitals, first in Ghana, and later in Upper Volta (now Burkina Faso). It supported him through the tougher trials of life.

He was very proud of me for going to university, and my various degree courses; he came up to Manchester with my sister and Nan for my undergraduate graduation ceremony. And when, several years later, I was to get married in a field in the middle of nowhere in Tennessee, he and the rest of the family flew out for the wedding. I am so glad that both my Dad and my Nan were able to be there that day, along with so many of my friends (whose tent, incidentally, was struck by lightning a few hours before the ceremony).

Thankfully, I don’t feel I had any unfinished business with Dad. He knew I loved him, I knew he loved me, even though he wouldn’t say something like that out loud. My wife and I had him up to visit a couple of times over the last few years, and he did some work on the house which was a great help to us and a cause of satisfaction for him. The last time he visited, he confided in me that he was struggling with getting old. He was still willing, but his body was no longer as capable as it once was. He still enjoyed life, but it seemed to me that he feared aging to the point of incapacity more than he feared death.

Dad was an exceptional man, filled with an exuberant love for life and a playful spirit. I feel lucky simply to have known him. That he was my father was an immense blessing.

I was so sorry to hear of your loss. You know I will be around for you if you need me.

All the best to you and your family.

My condolences, Chris. What a wonderful man to have in your life.

Sorry for your loss Chris.

Chris, I'm so sorry to hear this. My thoughts are with you and your family.

I feel very honored to have gotten to meet him and I am sorry for your loss. It wa snice to be able to read about someone that I value for his part in your life. It enabled me to see him as slightly more than just "your father", which was reason enough for me to anyway.

Chris, my condolences to you and yours. Your father sounds like a wonderful person to have known, and long may his memory and his influences on the world continue.

God rest his soul. More than anything, I'm glad that you two had a strong and fruitful relationship; he sounds like quite a man with more than his share of interesting stories!

I'm really sorry for your loss, Chris.
Take care, and all the best.

I'm sorry for your loss, Chris.

All my sympathy, Chris.

I lost my grandfather two months ago, so I have some idea of what you're going through, Chris. He was the first member of my close family to die. It elicited in me an almost childlike incomprehension, of "where do people go?" The answer is everywhere. Everything they ever gave you, or made for you, ever memory that's as vivid as the day it happened. Faces in the firelight, voices in the wind. It sounds like you have those happy memories of your father. And whilst it's sometimes very hard recalling them, and often they can come back when you least want them to, they are precious and will, in time, be a comfort to you.

Oh, love. My condolences to you and your family.