The End of the Game
Reluctant Hero: Chapters 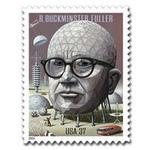 R. Buckminster Fuller was that rarest of things, a genius touched by an idealistic fervour. There is no shortage of geniuses on the planet, but most decide to invest their talents in self-advancement, or become distracted with issues of little social benefit to mankind. Bucky, as he is affectionately known, saw further. Although he is most famous for his now-ubiquitous geodesic dome design, perhaps his most impressive idea was that of the Global Energy Network.

Bucky examined the resources of our planet and concluded that – contrary to what is usually assumed – there was plenty to go around. The problems were not a shortage of resources, but a failure to fully capitalise upon those resources. He set himself the utopian vision:

To make the world work for 100% of humanity in the shortest possible time through spontaneous cooperation without ecological offense or the disadvantage of anyone.

This goal is still pursued by the Buckminster Fuller Institute.

As a game designer, I have always been impressed by Bucky’s innovative World Game. This participatory game, using both computers and human moderators, challenges players to make use of the resources of the country they are assigned to play in order to solve that nation’s problems. Since the players do not have to worry about ‘real politic’, an astounding amount of progress is possible. Indeed, the World Game demonstrates to a fair degree that the game of global resource management is not a zero sum game. In a zero sum game, players make gains only when other players make loses – gain and loss balance out. The suggestion that global resource management was not such a game strongly suggests it is possible to make co-operative gains without accruing losses. (Biology, seen through the eyes of Lynn Margulis, sends a similar message – if it did not, planet earth would still be a battleground for rival mono-cellular organisms).

(As an aside, I think perhaps that my personal issues with Sid Meier’s Civilization stem in part from its rendering of international issues as a strictly competitive affair. A marvellous game it may be. Helpful to the global situation…? Not so much).

Bucky concluded from his investigations that the problems of power supply were less about making more electricity and more about distributing it more effectively. He suggested that the global energy problems could be largely resolved by a Global Energy Network – a power grid that connects all the countries of the world together into a single global power grid. The fact that this principle works on the scale of individual nations is perhaps the clearest evidence that it could work on a broader scale.

As a simple example of the benefits, most power stations generate power constantly but during the night, when electricity use is reduced, much of this power goes to waste. But of course, it’s always day somewhere. By the use of a global power grid, countries could sell their night time surplus to other countries – benefiting both. The concept is being pushed forward by the Global Energy Network Institude (GENI) in San Diego.

When Bucky’s big idea was first pushed forward, it was well received by many countries – especially the poorer nations, many of whom had great potential to export power and work their way out of poverty. According to Robert Anton Wilson’s account on the matter, it collapsed because the United States of America would not back the plan. The political reasons why support for this idea was not forthcoming are numerous and readily derivable by the interested party. The chief problem is not the cost of the endeavour, however, but the issue of trust. A global energy network requires global trust – you are asking to share infrastructure with another country. This commitment does not come lightly, especially as it arguably calls for an end to war. In the context of real politic, this is apparently too much to ask.

But fortunately, the matter is not closed. I was delighted to discover that Bucky’s big idea has re-emerged recently in a modified form. If the US will not support it, perhaps we can make a start in part of the world? The Trans-Mediterranean Interconnection for Concentrating Solar Power (Trans-CSP) is just such a plan. Originating in Germany and supported by both European and Arab countries, the plan calls for the construction of solar power stations in hot deserts (particularly the north Sahara), and for the power generated to be conducted by low-loss, direct current transmission lines up to 3,000 miles away – far enough to connect the whole of Europe and North Africa. 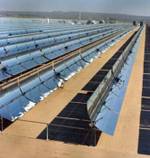 The technology is already extant. CSP technology, which uses mirrors to focus sunlight upon a column of water generating steam to run a turbine, has been used successfully in the Mojave desert for more than 20 years. It goes without saying that the energy of the solar flux hitting the surface of the Earth is vast, and also that this energy has an extremely minimal carbon cost. It has been estimated that the cost-effective component of the global CSP resource exceeds the most ambitious plans for nuclear expansion by more than 200 times.

And as if these benefits were insufficient, CSP "light farms" (as I have termed them in my novels) located near the ocean can also act as desalinization plants at minimal additional cost; since the next most obvious resource war (once we have finished fighting about oil) is a global water war, the capacity to eliminate this problem before it occurs is surely tempting.

The only real barrier to this project – a viable first step towards Bucky’s big idea – is political. Our representative democracies trap politicians into making dumb decisions about energy policy because to a politician the immediate issue of keeping their job outweighs long term issues of benefit to all mankind except in rare cases.

We can work against this by making it clear that we will not vote for anyone who will not support such a plan. Study the case put forward for Trans-CSP. If you are in agreement with its plans, write to your political representatives to voice your support and make it clear that if they are not willing to support such a plan, you cannot vote for them. (You do not need to find politicians willing to back the plan for this strategy to be effective). Even though the number of such letters or emails received will be low, politicians know that for every letter received a hundred others feel the same way, and in this way influence can be applied.

R. Buckminster Fuller dreamt of a utopian world. His vision was not based upon arcane political systems, but upon the capitalisation of mutual co-operation. All that is needed for his Global Energy Network to become a reality is for the political pressure to remain, and to gradually build, until no other choice is plausible. This may take time. But it is surely worth the pursuit.

Is this not currently going on already amoungst the Scandavian countries (and Germany)?

There are a large number of HVDC lines which sent surpluses from Norway's and Sweden's Glacier driven Hydro-electic plants south in the melting months and carry power north during winter.

Regardless the Cross-Skagerak lines can be pointed to as a very successful proof of concept for the fessibility of any Trans-CSP system ( http://en.wikipedia.org/wiki/Cross-Skagerak ).

Colm: thanks for this! It hadn't occured to me to check for 'pilot schemes' already in place!

I'm somewhat disappointed you didn't discuss the potential of tensintegral structures to be utilized by games.

I agree that Bucky's idea is possible, and believe technology increases can be guided to marginalize risks and lower the requisite barriers to such an implementation, though I think the sharing will first be one of information, then of physical energy. Infra-human AGI will play an integral role in mediation.

I'm pretty sure I'm going to burn-out as an artist sometime in the second half of the next decade, so my plan at that point is to help further a realistic utopian strategy, rather than hang on like Kubrick did.

I guess it is the EU which needs a game simulator first... it 's the only transnational system that works (of which i am aware of), but hardly...and Trans-CSP won't go anywhere before EU governance and citizens' participation make a great leap forward. Any ideas?

As Chris points out, human tribalism and short-termism beats long-term goals any day of the year. Short of finding some approach that tweaks humans' ideas of "tribe" away from the carefully-evolved level of tens to hundreds of individuals and replaces it with a more suitable several billion individuals, I can't think of anything that would help.

The secret of the game is pressure over time. While the system cannot be tipped beyond a balance point instantaneously without exceptional circumstances, significant shifts can occur on a generational basis. New voters learn new priorities from older (more jaded!) people, and then new politicians exploit the potential of the incoming zeitgeist to steal power. It's actually quite symbiotic when it works. Or so it seems to me. :)

PS: Patrick: tensintegral structures, you say... Since I didn't, why don't you? :)

you are actually not the first person in the "game sphere" to cite that "generational" or "collective learning" (i definitely reject the ubiquitous "evolution" metaphor in this case) perspective. Which of course is close at hand if you watch people gaming all day long...:)

Would you place "generational development of the general public discourse or zeitgeist" over education though? What role do schools play in teaching kids the means or rules (given that the ends are either contingent or changing over time and therefore unforeseeable...)?

I prefer to put my faith in people rather than institutions, therefore I prefer to have faith in teachers rather than curriculum. An added benefit is that a few good teachers are all it takes; when I look I find them in the minority, but still thankfully in abundance.