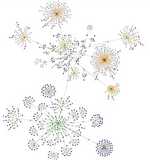 Only a Game is a non-fiction role-playing game, played in text and pictures over the internet by no more than about a hundred players. Its Games Master (GM) is Chris Bateman, who designed some of the more trivial mechanics. However, much of the game mechanics were designed by an unknown entity or process known variously as God, the Universe, Fate, Time, Chance and a number of other names.

In this role-playing game, or RPG, players take the roles of people who have fallen by chance into the reality (or mind, or sometimes language game), of Chris Bateman. The GM describes aspects of this reality to the players, who respond in a number of different ways. Most common is to say and do nothing at all. However, some players go and talk about the latest events in the game to other people. A few respond, directly or indirectly, to the GM. It is these responses, by and large, that drive forward what can be considered the narrative of the game (although it is, always remember, a game of non-fiction). There are occasional bouts of time travel, as parts of the reality exposed at an earlier point in time are brought up again by fresh comments.

The play is focused upon games and game design, philosophy of language, philosophy of science and philosophy of religion, although squirrels and nonsense also occur. The landscape of the reality the game is set in (Chris Bateman’s mind) is complex and changeable, but a few things are always the same: he never means to cause offence, he always believes that diversity is essential, especially diversity of thought and belief, and he is both pro-science and pro-religion. A large metaphysical wall has been built between these two regions in the reality, and while players are free to cross between them, a certain amount of resistance will occur when this happens.

Unlike more commonly encountered realities, the reality used in this game is not always a tunnel and the play may flip from one reality to another, apparently at random. At one moment, players may find themselves in a grounded scientific debate with no recourse to metaphysics, in another, they may find themselves in a part of the reality that is dictated by Christian metaphysics (or Sufi, or Hindu, or Discordian, or…) and experiencing what that reality feels like. This causes some turbulence, but adds to the ilinx of the ride.

There is only one rule, which is play friendly. Even this rule is occasionally broken, bent, twisted, nudged slightly, folded, spindled or mutilated, but usually everything runs smoothly. As long as there has been no intent to offend, everything usually works out.

Politeness is requested, but since standards of politeness vary wildly from culture to culture, and from individual to individual, a certain latitude must be allowed.

Most players enter the game as themselves, but a few adopt a persona to play with. Character development is random, but players have some control as to how their character will change as the game progresses. Players are encouraged to attach their character sheet below, using whatever mechanics they wish to invent.

Occasionally, one of the plays will result in some of the players experiencing an intense discomfort or frustration, often manifesting as anger. In the worst instances of this bug, (often referred to as cognitive dissonance), the flow of the game may be disrupted. This is a known bug, resulting from design flaws in the firmware of the organisms used to play the game. An upgrade has been requested, but is not expected before the end of the game.

If you find yourself experiencing cognitive dissonance, take three short breaths and three long ones, step away from the game for a while, and come back to it later if you feel like it.

As with all Chris Bateman games, the Universal Disclaimer applies.

We hope you enjoy Only a Game, and look forward to playing with your reality soon!

The opening image is a recent map of the game’s progress thus far, generated using a rather cool tool I learned about from Corvus that maps websites. Please feel free to attach your character sheet (using any system of mechanics you like, real or imagined!) or post rules queries below. Thanks for playing!

Once per day, Chris may exchange his mind for anyone else's

Background: Jack, a dilettante and general layabout, was regaling a friend with his armchair commentary on game design one day. With the seemingly innocent remark "This guy's last name is very close to Batman. You should check out his blog on game design," the friend unwittingly sent Jack into the inescapable vortex that is Only a Game. Every escape attempt has failed.

Nocturnal! Whether he really wants to or not, Jack will see the light of dawn before he finally goes to sleep. At which time, despite living half a world away from Chris Bateman, Jack will often be the first to comment on a new update.

[GM can i pls roll a new character]

Neil Bundy
15th Level Something Or Other

Background: Murky, involving various nefarious stuff and lots and lots (honestly a quite surprising amount) of not very much at all.

[I keep asking to roll a new char., but am told mine is actually better than it appears (to me at least)]
[Oh, and I *really* like the cool tool that pictorally maps a website - very cute!]

Background: Peter was a contemporary of Chris' at Manchester University, and has only recently given Chris back the files he's had backed up on hard disk for the last 15 years. More information can be found on his Web site.

Advantages:
Standing in a field and having people throw projects at him (+25)

Skills:
Blurt Out Bad Ideas: +3 when joining any discussion he is unfamiliar with.
Talk Out of Ass: +8 while defending any position he feels passionate about. 15% chance of real fact usage.
Condescending Tone: +7 Intimidate/-2 Likeability. Used unconsciously at inopportune moments, usually tech related.

Special Abilities:
Trivia Stun: Able to stun opponents by use of rapid-fire trivia. Temporarily increases Knowledge for the duration of the opponent. 20% chance of failure.
Computer Zen: Able to fix most electronics by simply being within 10ft of device. 40% efficiency boost to computers within a 100ft radius. +20 to Archaic Computer Knowledge checks.

unusually resistant to the mental and physical effects of time travel

Special Ability:
Procrastinate: 90% better chance to find a reason to not do what needs to be done. Always in effect.
Use Brain: Negates the effects of the Nothing Useful to Say attribute. 95% chance of failure. May only be used once per day.

Speed (at completing internet postings and emails) 1/27%
99% Pontificating about modern mediated culture.
77% Pretending to be clever.
Lucidity (of internet contributions) 12% - 63% depending on lucidity of reader
5% Programming
10% Researching

I messed that one up...bloody html formatting

Patrick Dugan a.k.a The 99th

Burn - spends energy rapidly, producing a burst of crazy hot concepts, a randomly fluctuating percentage of which are useless. Can only be done once per day, decreses awareness for 8 hrs after peak.

Critical Analysis - I got the sharigan of game design theory, show me a piece of media and I can see how it ticks and copy those patterns, or evaluate why they're faulty or aesthetically problematic. Costs some energy over time, can be used with burn to stack roll bonuses.

Intuition - use as directed

Mordakian's Sheath of Invincible Theory - requires a new concept of theory for each use, gives a bonus to craft rolls for a short time.

Wordplay - Adds +1 bonus to the rationality roll of a piece of writing. Useless against players with Cthultlu's Eye of Unwavering Reason)

Special Abilities:
Always running a subroutine on how to read people and figure them out.(Soul reading + 29)

Coma: the million year girl
Kline: Lets get out of time

Understanding what the hell this is all about: 1%

Each turn roll a d20. If under X, lose focus of long-term projects for immediate, hedonistic activities. X may not be known by anyone and may change at any time.

Right-o. I'm feeling terribly ignorant right now. But I'm curious enough to post and ask, "How does one... er... play???"

Hi Tuxedo! This post is something of a running joke... I call the blog a "non-fiction role-playing game", and so "players" (regular readers of the blog) post their "character sheets" here. If you've never played a role-playing game, then this joke will not mean anything to you! :) If you have, then all you have to do is post a comment describing yourself in RPG-like terms (although Bezman has gone for more of a trading card game sort of description, which is also fair game!)

For those that know a little about the rpg FATE 3.0 /SotC

Background: Von Lazuli is an Orange.

Special Ability:
Once each day, +1 Ripen.

- Broadcast Prescience: Once per week can predict which episode of a television serial will be playing that day. Only affects the show coming up next.

- Assimilator: Rapidly understands and incorporates new ideas or creative tropes into existing cognitive framework (+35% to worldbuilding and waxing philosophical). 40% chance of failure when sense of ethics and fair play is directly challenged.

- Street Lamp Electrokinesis: by focusing his existential angst, can disable one street lamps in any given block at will, but only if he shouts "Evil!" immediately afterward (this is consistent, despite apparently violating basic causality).

Background: After discovering Only A Game far too late, Amy realised it might actually be incredibly useful for the few days she actually has left studying philosophy at - what is it american people call it, high school? - and that it appeals shockingly well to her shockingly geeky nature. She plans to explore the blog over the next couple of weeks, under the guise of revision.

Specialty: Amy can drift off into incredibly detailed daydreaming either at will or helplessly and unwittingly.

Background: As a self-professed jack of all trades, Gilbu often finds himself with no idea where he is or what he's doing. Curiosity guides his impulses, and proverbial dead cats are cremated en masse each week as a result.