Reluctant Hero is the new computer role-playing game from 3D People and International Hobo. I'm pleased to announce we now have a tech demo for the game, and should hopefully be attracting a publisher for the project in the near future. I introduced the broad concept for this game in an earlier post.

Since the passage of time is an essential element of the gameplay, one of the features of the engine is that locations can be dynamically rendered in Spring, Summer, Autumn or Winter. Pictured to the left is a long house in the Conclave of Taymuria in the Autumn. Buildings in the game can be purchased and then used for a variety of purposes - this cabin could be used as a Hunting Lodge, a Trading House or a Hideout, for instance. 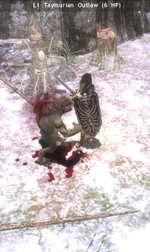 To the right you can see a skirmish taking place in Winter. The player, dressed in Sura armour complete with a Boar Helm, has very nearly defeated a foolish Taymurian outlaw. The Sura totemise many animal species, and make armour in the form of those beasts believing that this will embue them with their essential traits. The boar symbolises stubborn victory.

The combat system for the game is quite different from a typical role-playing game, and I hope to discuss the intended mechanics in a future post. In brief, however, there is very limited ability to heal wounds while in the field - if you are injured, expect to spend a few months of your life recovering from your trauma. Consequently, players will need to develop a set of abilities which can protect them from damage for as long as possible.

Finally, to the left we see the player talking to a Taymurian Shaman in the Spring, while a mated pair of condors fly overhead.

The majority of the quest content of the game will be dynamically generated from an event system, reflecting changes in the world that will affect the player's life. Furthermore, almost everyone (and everything!) the player meets for whom they speak the appropriate language can be offered a job in a building they own - this shaman would probably not accept employment in the player's Brothel, but he might consider sharing a Sanctuary where he might impart his knowledge of the dreamworld.

There is a great deal more I'd like to say about the game mechanics, but until we have a deal with a publisher I shall have to bide my time. In the meantime, I hope you enjoy these screenshots taken from the tech demo - personally, I can't wait to start work on this project and hope the publishers don't keep us waiting too long!

These images are copyright 3D People; permission may be required to reproduce them.

I am really looking forward to seeing this game in action, Chris!

Very nice tech shots. And with everything else that you have been telling us about the game, I expect a wonderful balance of gameplay and story. Can't wait to hear more. :-)

This is high quality stuff, I can see how you'd need a substantial (but relatively meager, compared to AAA games) budget in order to do all the content you need.

BTW, you ought to play Mount and Blade, if only for reference.

Sounds very interesting, look forward to being able to download something public.

Any chance for an OS X build :)

Thanks for the show of support everyone!

Two people have now asked about OS X - I'll look into this, but don't hold your breath. :D

Thoroughly enjoyed Kult and I am looking forward to the next outing - best of luck with the publishers.

Another vote for OSX here. . .

Kult should be released for MAC in the next weeks. I hope there will be a MAC version of Reluctant Hero as well (though no promise:-)).
But no guarantees;)

Wow.. I'm impressed that you're considering a Mac version of RH... that's great!

I'm sure Chris will tell me where I can find Kult when it's released.

I really hope that you can get a publisher and the support needed to make this game superb. I have been watching progress on this game since the earlier post where you introduced the game. I am very intrigued by this game, as the concept has not been done (or at least not done well) in a game before. I will be following this game's progress with interest, and I wish you luck in completing the game.

Anders: it's weird that you've brought this up, but thanks for doing so. The official story is that this game has been cancelled - you certainly won't see a game by the name of "Reluctant Hero" from us. I can't tell you the unofficial story, but I will ask you to read between the lines... :)

Wish I could say more but my hands are tied.

Wow, guess I'm late to the party. That's really too bad that the game has been cancelled, the concept intrigued me. But I do wish you luck on whatever projects you may be working on and whatever they're called...But I think I see your meaning. Hope everything works out well for you.