Artisan
On the Mac 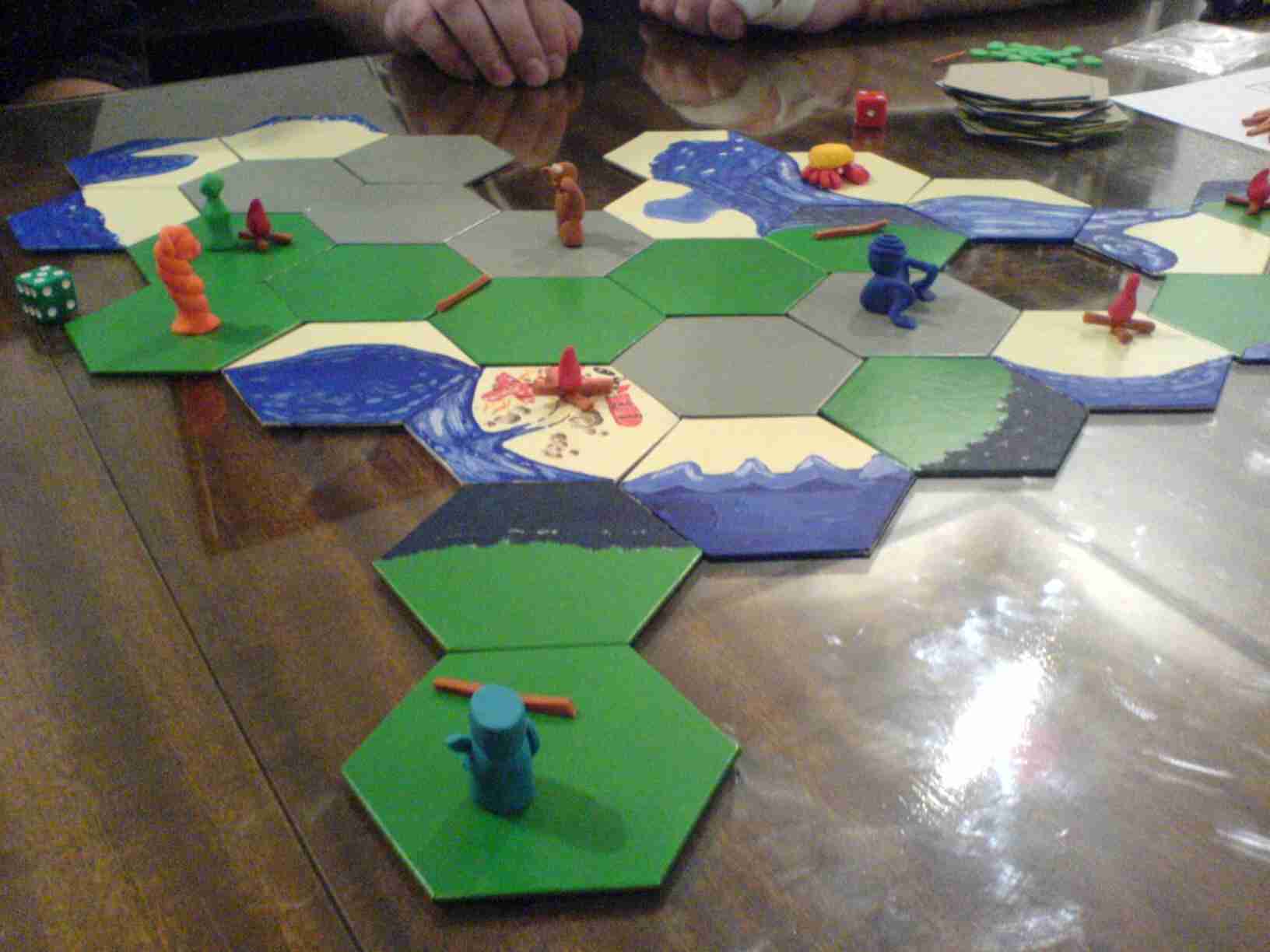 This weekend was my wife's birthday, and the thing she really wanted to do was pursue a big arts and crafts project with our friends. She loves making things with people, so this was a golden opportunity to make another board game with Fimo playing pieces, using the cardboard hexes I bought near the start of the year.

So I designed the board game, named Lost Island, on Friday night while she was out at a Zero 7 gig, and we made the pieces on Saturday afternoon. We were playing it within 24 hours of my starting the game design. It turned out really nicely, and was good fun to play. It's been made in the style of a pulp adventure movie, something like the Doug McLure monster island flicks The Land that Time Forgot (1975) and The People that Time Forgot (1977), or Ray Harryhausen's Mysterious Island (1961).

The Fimo playing pieces are especially cute - my favourite is probably the Yeti.

If anyone is interested in a write up of this game (in the manner I did previously for Black Sun), do let me know, and also whether you want the designer's notes as well as the components and rules. I think it would be possible to make this game with square tiles instead of hexes, if anyone is foolhardy enough to want to make their own game set. I won't have time before December, but I'm happy to do it if there's a genuine interest.

(Incidentally, Doug McLure is one of the real life actors that Troy McLure in The Simpsons is pastiched from - his catalogue of cheesey movies is truly a phenomenon. He died in 1995).

I'm always interested in reading about how you go about designing games.

Game rules and designer notes would both be appriciated and welcome. I'd love to see more of how you design, and how you shape ideas into a playable framework.

Chris, count me as a subscriber!

Just as an aside: Inventing new games using existing pieces, boards and especially cards can be a great exercise in game design - and in spares you most of the hassle of hand crafting the game set from scratch.

Does anyone know of a web site where people share self-made board games?

translucy: I recommend new game designers begin by designing a card game. If you can't design a game with a deck of cards, you shouldn't be going into game design is my honest opinion (although you can still go into game producing, of course...)

I don't know of any website that shares homebrew games from existing components, although homebrew rules for existing games can be found somewhere at boardgamegeek.com, I think. I could be wrong. :)

Chris,
I loved reading your write up on Black Sun. It was a great insight into the game design process. Please do a similar article for Lost Island!