Lost Island is a custom-made hex boardgame, made last year. The game is set on a mysterious island, where the players have had the misfortune to become stranded. Can they build a raft and escape before the monsters of the island defeat them?

This is one of a set of three posts about the game, describing the components. Rules and Designer’s Notes follow shortly. This game does not exist in a commercial form, so if you want to try playing it, you’ll need to make or jury-rig the following components. Alternatively, you could make a digital version.  I am happy for anyone to do so provided they do not commercially exploit the game, which remains copyrighted to me.

The hexes in my set were made by spray painting and hand-painting some 90 mm custom made hexes, which were laser cut from 100 micron (1 mm) cardstock. However, the principles of the game will also work with square board pieces, which are considerably easier to make. Unlike the Black Sun hexes, I haven’t varnished these. The Black Sun hexes stick together as a result of the varnish, and I decided I’d rather risk the paint work being damaged from wear and tear this time.

16 Beach Hexes (top left). Each is painted so that exactly one half of the edges are water, and one half are beach. These were made by spraying the hexes with a sandy yellow paint, and then the water was painted on by hand. We actually made 18, so that 2 could be used as Crash Sites (see below).

10 Forest Hexes (bottom right). These were made by spraying hexes green.

6 Forest Edge Hexes (bottom left). Each is painted so that exactly one half of the edges are water, and one half are forest. These were forest hexes with the water hand painted, as with the beaches.

8 Mountain Hexes (not shown - like the Volcano in the top right, but with nothing painted on it). These were made by spraying hexes grey.

1 Volcano Hex (top right). Made by painting a volcano image onto a mountain hex. We made two, so we could have a different looking volcano in each game.

1 Crash Site Hex (centre bottom). This was made from an extra Beach hex. The one that has been made is a plane crash, but the intention was to make an alternative Crash Site based upon a shipwreck.

If you wanted to make the game with square board pieces, just follow the same guidelines, that is, two of the four edges of any square with water should be marked with water, and the other two with the appropriate type of land.

We later added a rule about the Volcano erupting, and flipping the hexes over as part of the endgame. This was a natural progression of the play of the game. If we'd known this was going to happen, we would have spray painted the underside of each hex in red to show the lava.

1 Pawn. This shows where the player is on the game board. You could use anything as a pawn; we made custom pieces in different colours.

1 Hut. This is something the player builds.

20 Counters. These are used for scoring.

About 50 Wood counters. We made them out of brown Fimo, but 50 matchsticks would be just as good.

5 Fire counters. Again, made from Fimo, but you could make them from cardboard.

The game requires a monster for each of the terrains – that is, a Beach monster, a Forestmonster, a Mountain monster and a Volcano monster. We made ours out of Fimo, but you could use plastic dinosaurs or something similar.

We made the following monsters: 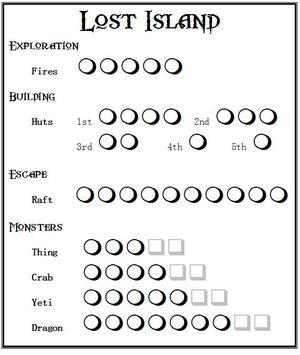 You will also need a scoring sheet like this one, which is where the scoring counters for each player will go as the game progresses.

And last but not least…

Next we’ll look at what you do with all these pieces as we go through the rules.