I Feel Foolish
Moving On... 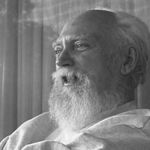 Robert Anton Wilson, the infamous Discordian intellectual and guerilla ontologist, passed away on Thursday 11th January 2006, one week before his 75th birthday, as reported in his blog.

I had the great pleasure of hearing him talk in London, at a special event where he and fellow eccentric Richard Bandler provided a scintillating evening of alternative thinking and anecodes both amusing and thought provoking. I asked him at the time what the story was behind the rumours of his death (which had circulated in the mid-nineties), and joked that we were getting tired of celebrating his death.

Although at times I disagreed with his approach, I always admired his playful spirit and his striving to propagate a wider understanding that, as the Zen Buddhists suggest "we are the master that makes the grass green". His books were  'gateway texts' into my love of philosophy, and I always admired his ability to stretch his mind so wide that no-one could see the edges.

Possessed with a ruthless optimism, a fanatical zeal for freedom of thought, and a sense of humour both wicked and charming, Robert Anton Wilson leaves behind a diverse collection of books that will surely be enjoyed by generations of alternative thinkers to come. My sympathy to his family, and I promise to keep the lasagne flying.