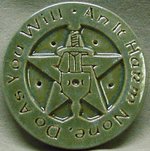 In our discussion of the Golden Rule, I intentionally did not mention the Wiccan Rede, a principle which states:

An it harm none, do what ye will

Do what you will, so long as it harms none

‘Rede’ is a Middle English word meaning ‘advice’ or ‘counsel’, and the Wiccan Rede is usually interpreted in ethical terms. Because it insists that ‘no harm is done’, the rede all but requires an outcome-focussed interpretation. The most famous wording of the rede is attributed to Doreen Valiente, a member of the “original” Wiccan coven led by Gerald Gardner.

Gardner was a British civil servant, considered either to have founded, or at least to have popularised, Wicca in 1954. He claimed that the practices were based upon the pagan religion practiced in Britain in earlier times, which gives rise to its claim as being ‘the Old Religion’. However, while some neo-pagans believe in and assert the antiquity of their practices, most historians ascribe more influence to the work of Aleister Crowley earlier in the twentieth century.

In 1904, Crowley published his Book of the Law, which contained his famous statement “Do what thou wilt shall be the whole of the law” – clearly an influence in the Wiccan Rede. It is worth noting that this statement is followed by the response: “Love is the law, love under will” (collectively known as the Law of Thelema, an ancient Greek term meaning ‘will’), which ties this precept to the Golden Rule.

Crowley is occasionally erroneously characterised as a Satanist, he is best understood as a mystic; his lifestyle would probably offend many Christians, but it is a grave error to suggest that he ‘worshipped Satan’, just as it would be a mistake to equate Wicca with Satanic practices.

Other influences on the rede may include John Stuart Mill’s Harm Principle, and the medical precept “First, do no harm” (Primum non nocere in the original Latin), often mistakenly assumed to be part of the Hippocratic oath. There is also similarity with Saint Augustine of Hippo’s 4th century A.D. phrase “Love, and do what you will.” Since Augustine is considered to be one of the Christian ‘church fathers’, the rede can be linked to Christianity, albeit tangentially.

The Wiccan Rede is difficult to interpret except from an outcome-focussed perspective. Outcome-based ethical systems of all kinds suffer from severe problems, not least of which is the limited capacity we have to anticipate all the consequences of our actions. This critique of Consequentialism is worth exploring as a separate issue.

I am not a neo-pagan, except in so much as some pagans consider Discordianism (one of my five religions) to be an affiliate of neo-paganism, and I do not practice the Wiccan Rede; I found my ethics on my Christianity, with influences from my other religions. However, I am friends with and have considerable contact with pagans (including Wiccans) and must say that, pragmatically, the Wiccan Rede has not yet provided any firm foundation for ethical conduct among the practitioners of this religion. In fact, the neo-pagan communities in Tennessee have severe problems resolving their collective ethical issues, in part because of a tension between those who wish a more formal stance on the subject and those who find such an approach anathematic to their religious practice.

However, this practical failure of the Wiccan Rede is not sufficient to indict it in principle; after all, a great many Christians do not seem to follow the Golden Rule, but this is at most an indictment of those people, not of the principle itself. Many treat the rede as a restatement of the Golden Rule, others enter into arguments on the issue of harm caused by action versus harm caused by inaction, demonstrating a general problem with outcome-focussed ethics.

On the whole, I believe it may be safer for Wiccans to interpret the rede in the context of the Golden Rule, while recognising the uniqueness of their principle in terms of an explicit rejection of any notion of consensual sin (the only thing that can be considered ‘evil’ under the rede being harm). However, on the basis of my observation of the pagan community, I must conclude that the rede is as insufficient a foundation for an ethical system as the Golden Rule – at most, it contributes valuably to an ethical frame of reference. An individual practicing the Wiccan Rede must still derive their own moral system if they wish to be an ethical individual.

Interesting point that the Wiccan Rede looks a lot like an outcome-based moral principle. I agree with you that there are serious problems with such an approach. Certainly most people would balk at saying the intention of the actor does not matter at all. (The classic illustration there is the distinctions along the line from murder through manslaughter and negligence to self-defence and genuine accident).

Michael: Absolutely! Taking only outcomes into account is a strange place to be - but I also suspect that one cannot construct a complete moral system without some role for outcomes. I need to have a post which addresses this tripartite approach I'm using more directly as it's clearly central to the approach that is developing.

It should also be noted that "will" has different interpretations. It can mean "do what you want" or "do what you can create through thought" Like to will in the sense of wish into existance.

Wiccan: sure, most neo-Pagans have this sense of "will" in the context of manifesting possibilities. But it seems to me that those two senses are interrelated.

Nonetheless, what Wiccans mean when they talk about "will" is certainly somewhat softer than what Nietzsche means when he talks of "the will to power".

Thanks for stopping by!