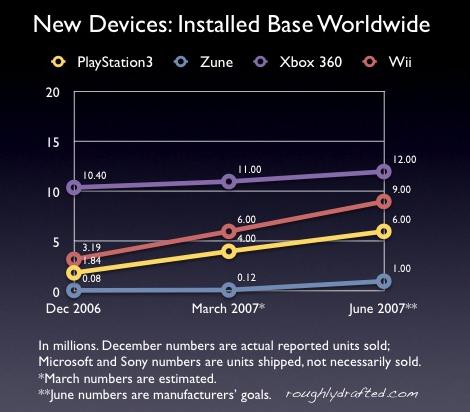 Picking up from Corvus' comments on the sale of consoles in My Nintendo Confusion, I dug up some sales figures to see what was going on (thanks to roughlydrafted). This chart speaks greatly of the current situation, assuming the estimates and predictions hold.

As you can see, the Xbox 360 has the advantage in terms of strict numbers, thanks to its one-year head start. But the other guys are catching up! Microsoft seem to be growing their market by about 800,000 units quarter, while Sony's PS3 is gaining 2 million a quarter. If they can keep up this pace, the point of intersection would be a year away, although shifts in the market will doubtless make this prediction irrelevant.

Meanwhile, Nintendo are on the best form they have been since before Sony entered the market, with the Wii selling through as soon as it can be stocked, and DS sales being equally brisk. The Wii installed base will almost certainly surpass the Xbox 360 installed base before the year is out, and there is no sign of a slow down.

Some gamers and developers are insistent that the Wii isn't up to the task, because of its lack of technical power and the "novelty" of its controller. What is being overlooked here is that the audience for games consoles is no longer just the Hardcore player, and has not been for some time. There are perhaps 20 million Hardcore gamers worldwide (it depends on how one sets the criterion, of course), but the PS2 sold 120 million units. The larger market are the casual players and families, and their play needs are not the same as the Hardcore gamer at all - I doubt most such people can easily tell the graphical difference between the old Xbox and the new 360 (unthinkable in the eyes of the Hardcore players!)

Will the Wii exhaust it's appeal? Quite possibly, and almost certainly with the Hardcore gamers who really need the power consoles to meet their play needs. But unlike the Hardcore gamers, the wider market does not usually buy multiple consoles. If they've bought a Wii, they won't be buying another console for several years. And if Nintendo are able to keep their interest - which is quite plausible, although by no means certain - many consumers won't need another console this cycle at all, which spells disaster for Sony.

Sony and Microsoft are banking on being able to sell, say, 50 to 100 million units of their machines to justify the extreme costs they have already shouldered, and continue to shoulder.

Microsoft can afford to lose out in the long run, because they have deep enough pockets to hang on in for several more console 'failures' if necessary (not that the 360 is a failure, except in the isolated sense of the 'ring of death') in pursuit of their long term goal of cornering an even bigger slice of the home entertainment market - and perhaps the holy grail of entertainment hardware, the multi-purpose "entertainment box" in every home.

Sony on the other hand is on shaky ground - even if their overpowered machine can beat it's overpowered rival, if the maximum size of the market for their console is truncated by the success of the Wii, they could wind up in the embarrassing position of having frittered away what was once an utterly overpowering market advantage. The loss of confidence in Sony could be devastating.

But... let's not jump to conclusions just yet. The game which will change the playing field is just around the corner. Grand Theft Auto IV . "IV" as they arrogantly dub it (although not unjustifiably). The last GTA game sold some 14 million units, and although the new game will probably not sell as well (San Andreas benefited from a mature market with a giant installed base - remember that 14 million is just over 10% of the PS2's installed base), it will undoubtedly sell consoles.

And yet, here is added jeopardy for Sony - because in choosing which console to buy in order to play the new GTA, Microsoft has not only the advantage of a cheaper console with a more established second hand market, but also added episodic content (secured at a reputed cost of $50 million) as the ultimate tie breaker. Even with the bad reputation for unreliability (which will not be fixed in time for the GTA launch), Microsoft looks set to pick up more unit sales than their rival when this cash cow hits the stores.

Sony needs to be providing reasons why people should want a PS3, and that is not an easy task at the moment, although future titles will doubtless shake the tree somewhat.

In the meantime, Nintendo are selling Wiis as fast as they can make them, the DS has trampled the PSP underfoot, and when I talk to publishers the first thing they want to know is if we have any Wii titles available. Nintendo are back, and no amount of disgruntled backlash can take that away from them. As for how long they can hold their position, I wouldn't like to predict. I still have a suspicion that Sony can sell more units in the long term simply because their market strategy is set at 10 years, and their machine is robust enough to deliver. But if they keep losing the edge on key titles like GTA IV to Microsoft, there is a genuine risk of coming out in third place - just as the PS2 ads prophesied.

Patrick, with all due respect you're absolutely wrong. I concur with the (360 vs. PS3), but your formula falls apart there. The correct view, in my not so humble opinion is:

...and yes, PC's double inclusion is intentional, given the wide variety of game experiences on PCs. PC is also meant as a generic term encompassing Windows, OS X, and Linux machines.

The market is not fracturing, it's expanding.

I made the point here that if the Wii is being bought by a casual market who do not generally buy more than one console in the same cycle, then the Wii is taking consumers out of the PS3 and 360's available pool - it is competing with them, hence I stand by the original formulation. :)

Of course, there is direct competition between Sony and Microsoft, but Nintendo's original suggestion that they would be opening up a side market seems unlikely on the basis of what we're currently seeing. The Wii is a serious thorn in Sony and Microsoft's side, although how long it will remain so is up in the air.

I have little doubt that the Wii is, in fact, bringing newcomers to console gaming though I have little more than anecdotal stories to back this up.

The proof of the pudding will surely be in the total sales figures for all 3 consoles in 10 years.

Bezman: the interesting thing for me will not be so much the totals in ten years time, but the shape of the sales curves through that ten year period. This looks to be a much more entertaining "console war" than the last few. :)

I am now bridled with visions of a bizarre sexual performance involving non-living technology.

Luckily I am a geek, so this is a good thing, rather than cause for medication ;-)

And I think the PS3 will tire of the pounding 360 eventually, flip it over and go for a ride. I don't want it to, but I think it's inevitable.

It's seems craazy to me to think wii is actually creating gamers, seeing how the grand theft auto series is one of the highest in the world. I don't think kids are getting into video games to play "wii bowling", and there's even a wii cooking game. Wii is for little kids, not the general gaming public.

"Wii is for little kids"

I think in point of fact it is the "big kids" who are the major cause of the growth in the market here. In the US, I understand a lot of Wii's are snapped up by retirement homes, for instance. Nintendo are targeting the family market, though, as they have always aimed to do.

The GTA games pull in 10-15 million unit sales, which is impressive, but they have built their franchise gradually over decades. BrainAge/Brain Training on the DS pulled in 10 million from a standing start, selling primarily to an over 40's market. Don't underestimate the power of the elder player in the new marketplace!

PS3 is way too expensive more than other consoles.