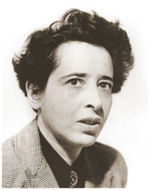 Hannah Arendt, perhaps uniquely among the great thinkers, refused the title of ‘philosopher’ on the grounds that philosophy is concerned with “man in the singular”, whereas her work was centred upon the fact that “men, not Man, live on the earth and inhabit the world.” Distinctions of this kind are central to Arendt’s work, and although her divisions are often open to dispute, there is no doubting the insight generated by her application of these distinctions. Whereas much political philosophy develops towards a central argument, Arendt’s work is a diverse and complex examination of the activities of humanity – it challenges us to take command of our lives and societies, rather than suggesting a specific goal or model by which to do so.

Born to a secular Jewish family in Germany, she studied philosophy with the highly influential Martin Heidegger, with whom she also undertook a stormy romantic relationship. Later, she befriended and studied under Karl Jaspers, another major twentieth century philosopher. After being interrogated by the Gestapo, she fled to Paris, and in 1941 escaped Nazi-occupied France to the United States. Returning to Germany after World War II, she testified in Heidegger’s defence at his denazification hearing, and in 1950 became a naturalised citizen of the United States.

Arendt is perhaps most famous for her essay Eichmann in Jerusalem, in which she argued that (contrary to conventional thought) the Nazi atrocities had not emerged from a will to do evil, or a delight in malevolence, but from individuals acting unthinkingly and with a lack of imagination that allowed them to disconnect their actions with their grim human consequences. She characterised this as “the banality of evil”.

The Human Condition is perhaps her most influential work, and much of Arendt’s later work depends upon distinctions she explicated and explored in this book. Published in 1958, its chief concern is the vita activa (the active life), that is, “human life in so far as it is activity engaged in doing something”. The work centres upon a tripartite distinction of human activities: labour, the activities of the human body and life itself; work, which provides the artificial ‘world of things’ within which we inhabit; and action, which stems from plurality – the capacity to begin, and to affect change.

In this serialised study of The Human Condition, we will explore Arendt’s ideas concerning these three concepts – labour, work and action – and consider their relationship to the world we live in today.

Next week: Public versus Private

So far, consider me on board for the serialized philosophy updates :)
So that's where we get "banality of evil"! A highly descriptive phrase, glad I can say I know where it comes from now. Can't say I've really encountered her work before, looking forward to hearing more.

Excellent. As I may have already said here, Hannah Arendt is among my favorite thinkers.

Thanks for the comments, guys! I'm interested to see how this will work... It's certainly different from how I've gone about things in the past. ;)

I'd be interested in finding out how she sees these three modes of conduct (labour, work, action) impacting personal satisfaction and that sense of productivity that we all long for.