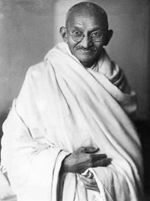 The son of a regional official from the Indian region of Gujurat, Mohandas Gandhi read Thoreau’s essay on civil disobedience while he was studying law in London. Gandhi resonated with Thoreau’s ideas, and agreed with Thoreau that people had a right to disobey unjust laws. However, he considered such action a last resort, and felt a great respect for the law.

After graduating, he accepted a position to work for an Indian law firm in South Africa. The discrimination against non-white people in the country horrified him – he himself was thrown off a train for refusing to move from first class (for which he held a legitimate ticket) to third class, and later in the same journey was beaten by a stagecoach driver for refusing to travel on the footboards to make room for a white passenger. These events and others like them marked a turning point in Gandhi’s life.

In 1906, when a law passed requiring Indians in South Africa to register, Gandhi began his first exercise in non-violent civil disobedience. He called upon his fellow Indians in South Africa to defy the new law, and suffer the legal punishments rather than resorting to violence. There followed a seven year struggle, during which many Indians (including Gandhi) were imprisoned and flogged, and in some cases shot dead. The public outcry against the South African government’s application of such harsh measures ultimately forced a compromise to be negotiated.

Returning to India, Gandhi began his campaign against the occupation of his homeland by the British Raj. He criticised the actions both of the occupying force, and those Indians who resorted to violence against them. The prevailing view of the British, in common with many colonial powers, was that they were bringing “civilisation to the savages”: this was a difficult preconception to overcome, especially since many Britains were making a lot of money out of ruling India.

Gandhi developed his own philosophy of non-violent resistance which he called satagraha (“grasping the truth”) saying of it: “Satyagraha is a weapon of the strong; it admits of no violence under any circumstance whatever.” He rejected the idea that ends could justify means, and insisted that the means themselves must be just. His satagraha philosophy contained many tenets, including nonviolence (ahimsa), truth, non-possession (i.e. poverty), fearlessness, equal respect for all religions and freedom from untouchability – a cultural segregation based on the Indian caste system that Gandhi considered an “inhuman boycott of human beings” and a corruption of Hinduism.

An important development of Thoreau’s ideas was Gandhi’s insistence that it was necessary to develop discipline, and to co-operate with the State and its laws as a prerequisite for resisting: “[it is] only when a people have proved their active loyalty by obeying the many laws of the State that they acquire the right of Civil Disobedience.” Thus even when disobeying a law in an act of non-violent resistance, it was important that other laws were appreciated and obeyed, otherwise activists could simply be dismissed as criminals or anarchists.

In 1930, Gandhi began a new non-violent campaign against the British, protesting the salt tax which had been enacted in 1882. Prior to the arrival of modern mining equipment, salt was a precious commodity, one that had been responsible for riots and uprising in other countries throughout history. (Before the widespread use of salt in processed foods, it was necessary for everyone to purchase salt, since lack of salt leads to fatal neurological problems). The salt tax greatly penalised the poor, and benefited only the British occupiers.

In March 1930, Gandhi and 78 of his satyagrahis marched nearly two hundred and fifty miles to a coastal village, to defy the salt tax and make his own salt by boiling salty mud in seawater. Tens of thousands of people turned out to greet him on route, and he gave dozens of interviews en route, making him a household name in Europe and the United States. Fully expecting to be arrested upon his arrival at the coastline, the British chose not to take action. On the morning of the 6th April 1930, after a morning prayer, Gandhi raised a clump of salty mud in one hand and announced: “With this, I am shaking the foundations of the British Empire.”

Encouraging others to make their own salt illegally, the British Raj ultimately imprisoned some 60,000 people in response. It was one of Gandhi’s most successful campaigns in upsetting British rule. In 1931, the British negotiated with Gandhi for suspension of the civil disobedience movement in India. However, Indian independence was still a distant possibility, and the outbreak of World War II further complicated matters.

After intense discussions with various Indian leaders, Gandhi declared that India could not support a war that was ostensibly about democratic freedom while that freedom was denied to India itself. Thus began the Quit India movement, during which Gandhi and his followers were repeated arrested, and Gandhi himself suffered repeated assassination attempts. When World War II ended, Britain was forced into the realisation that the age of the British Empire was coming to a close and, having required other nations to relinquish their territorial conquests, finally acceded to granting India its independence.

Unfortunately, the withdrawal of the British allowed other tensions in India to surface, in particular cultural conflicts between Hindus, Sikhs and Muslims. Indian Muslims favoured partition so that they could have their own nation; Gandhi was vehement that they should remain one nation. However, he was unable to resolve the crisis, and convinced by his colleagues that partition was the only way to avoid an outright civil war, eventually acceding to the partition that created Pakistan as a separate nation. The partition created further tensions between the new independent states of India and Pakistan, and these tensions ultimately cost Gandhi his life at the hands of a Hindu extremist in 1948.

By demonstrating the tremendous power of civil disobedience, Gandhi changed the way the world viewed resistance – for perhaps the first time, non-violent action was taken seriously as a political tool. Influenced by Thoreau’s earlier writings on civil disobedience, and inspired by his own beliefs as a Hindu, Gandhi offered a new view of the relationship between religion and ethics - one that denied the insidious idea that religion could justify inhuman actions. As he wrote in 1921: “As soon as we lose the moral basis, we cease to be religious. There is no such thing as religion over-riding morality. Man, for instance, cannot be untruthful, cruel or [unrestrained] and claim to have God on his side.”

Gandhi’s philosophy of satagraha was to have tremendous influence throughout the world, and in particular stirred the heart of a humble Baptist minister from Atlanta, Georgia, who was destined to change the United States of America as radically as Gandhi had transformed India.

I recall that Steven Den Beste made an excellent point about why "for perhaps the first time, non-violent action was taken seriously as a political tool":

Nonviolent direct action is only powerful and successful in very special circumstances. Both Ghandi and King were able to use the tactics they did because they were working within what amounted to an extremely decent environment, where they could be certain that their opponent recognized very strong limits on what could be done in retaliation to them for their actions. But when the opponent recognizes no such limits, such actions are simply a very virtuous way to commit suicide. Perhaps it would get you into heaven, but it would have no measurable success here on earth. If either Ghandi or King had attempted what they did in occupied Europe in 1944, they would have been disappeared by the Gestapo and would not be even a footnote in history.

You are right that peaceful protests only work under marginally democratic governments. But the limits of that are not necessarily very narrow. Basically the government must not casually kill thousands of it's own citizens, and you must have effective means of communicating both internally to coordinate actions, and to let people in general know what happens.

If enough people disobey the government it no longer is the government, and that is the most powerful weapon grassroot society-changers have, even when you do use violence to defend yourself against violence, or to get attention.

As for your concrete example, there were several cases where Germans or Scandinavians (I don't remember if it was Danish or Norwegians) protested against deportation or other mistreatment of Jews, and the nazis responded with stopping the abuse that was protested against and otherwise ignoring them. But they didn't have any access to mass media, and everyone was fed nazi propaganda all the time, so protest movements had no chance to spread.

Isegoria: yes, this quote is often given in this context to suggest limits to the effectiveness of non-violent resistance.

hej: I agree with what you say here. And furthermore, the Danes did in fact liberate Denmark from Nazi occupation in World War II by applying a strategy of "resistance disguised as collaboration" - a national network of civil disobedience which did eventually succeed.

Thanks for the thoughtful comments!

People self-organise into larger groups. If enough people identify with an organisation or cause, that cause starts to gain an identity. Everyone merely disobeying the government, however, is not enough to remove it from being "the" government - I have yet to find an adult in the UK who does not disobey the governemnt in many small ways each day. The government appears intact from where I'm sitting. Instead, I think enough allegiance needs to shift to an alternative self-organising group that that group gains its own identity and becomes a rival to the established organisation. You can't destroy a government; you have to create an alternative. For folks like me, sitting somewhere on the border between libertarian and anarchist, this is a somewhat annoying situation :-).

Peter: people by and large don't want the responsibilities implied by self-government, so we're stuck with making the systems we have work as best we can. It may be the case that people disobey the government every day in small ways, but there's a big difference between uncoordinated random disobedience, and co-ordinated civil disobedience. The later can bring down a government - although as you say, people will then want to install something in its place.