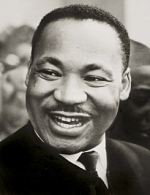 Like Gandhi, Martin Luther King, Jr read Thoreau’s essay on Civil Disobedience in college, and resonated with its central idea – that people should not obey unjust laws. The son of a Baptist preacher, King himself became a minister, and originally believed that the teachings of Jesus could only be put into practice between individuals. However, when King learned about Gandhi, his stance changed. He said in this regard: “Gandhi was probably the first person in history to lift the love ethic of Jesus above mere interaction between individuals to a powerful and effective social force...”

In Gandhi’s teaching, King began to find answers to the question that had vexed him for many years – how one could hope to bring about social reform. He was inspired by Gandhi’s words “Through our pain we will make them see their injustice”, and said of Gandhi’s satyagraha: “I found in the non-violent resistance philosophy of Gandhi... the only morally and practically sound method open to oppressed people in their struggle for freedom.”

Contrary to the popular perception, King did not begin the civil rights movement that worked to liberate black communities from the insidious “Jim Crow laws,” that under the guise of a mandate for “separate but equal” treatment in fact delivered brutal oppression of blacks in the Southern region of the United States. From the 1920s, another Baptist minister, Vernon Johns, had used his pulpit to stir up his congregation to fight for justice.

Johns was the pastor of Dexter Avenue Baptist Church in Montgomery, Alabama from 1947 to 1952, and delivered inflammatory sermons with titles such as “It's Safe to Murder Negroes in Montgomery,” and “When the Rapist is White” in response to atrocities conducted in Montgomery, as well as leading protests. His outspoken attitude made many of his parishioners nervous of reprisals, and in 1953 the deacons of the church accepted one of John’s many resignations. A new pastor was brought in: Martin Luther King, Jr.

Two years after taking over at Dexter Avenue, Rosa Parks was arrested for refusing to comply with the Jim Crow laws that required her to give up her seat to a white man. It was the tipping point for King, who took up a major role in the civil rights movement, and campaigned for more than a decade with protests, marches and economic boycotts. King was inspired in this struggle by his Christianity and, like Gandhi, found Jesus’ sermon of the mount (which contains the famous verse regarding “turning the other cheek”) to be a powerful call for a new response to injustice: neither violent resistance nor passive acceptance, but a middle path of non-violent resistance. Modern Biblical scholars such as Walter Wink confirm that this interpretation of the sermon of the mount is the most consistent with the nature of society at the time Jesus was speaking.

In 1959, several organisations (including the Quakers) paid for King to visit the Gandhi family in India, which had a profound affect upon him. On his final evening in India, King made a radio address in which he reflected: “Since being in India, I am more convinced than ever before that the method of non-violent resistance is the most potent weapon available to oppressed people in their struggle for justice and human dignity. In a real sense, Mahatma Gandhi embodied in his life certain universal principles that are inherent in the moral structure of the universe, and these principles are as inescapable as the law of gravitation.”

In 1965, King began to express his concerns about the United State’s role in the Vietnam war, and in 1967 (a year before his death) he spoke out publicly against the war in a speech entitled Beyond Vietnam: A Time to Break Silence. King insisted that the purpose of the US presence in that nation was “to occupy it as an American colony” and further criticised his government as being “the greatest purveyor of violence in the world today.” This speech turned much of the mainstream media against King, with Time magazine claiming the speech was “demagogic slander that sounded like a script for Radio Hanoi,” The Washington Post declaring that King had “diminished his usefulness to his cause, his country, his people,” and The New York Times calling it “Dr. King’s Error”.

But King refused to let political expediency draw him away from the ethical path he had chosen to walk. In his speech against the war, he had said: “Have we not come to such an impasse in the modern world that we must love our enemies – or else? The chain reaction of evil – hate begetting hate, wars producing more wars – must be broken, or else we shall be plunged into the dark abyss of annihilation.” Speaking of the cost of war, he observed: “A nation that continues year after year to spend more money on military defense than on programs of social uplift is approaching spiritual doom.” The war in Vietnam went on for another eight years, costing the US more than $100 billion, the lives of 58,000 patriotic soldiers, and causing the deaths of almost two million Vietnamese.

On April 3, 1968, the day before his assassination, King delivered a speech in support of striking sanitation workers in Memphis. He ended on these words:

Well, I don't know what will happen now. We've got some difficult days ahead. But it doesn't matter with me now. Because I've been to the mountaintop. And I don't mind. Like anybody, I would like to live a long life. Longevity has its place. But I'm not concerned about that now. I just want to do God's will. And He's allowed me to go up to the mountain. And I've looked over. And I've seen the promised land. I may not get there with you. But I want you to know tonight, that we, as a people, will get to the promised land. And I'm happy, tonight. I'm not worried about anything. I'm not fearing any man. Mine eyes have seen the glory of the coming of the Lord.

Martin Luther King, Jr awakened within the citizens of the United States a powerful passion for the liberty and freedom promised to them by their constitution. The spirit of civil disobedience kindled by his predecessor, Vernon Johns, and fanned into a blaze by King would go on to help provide equality and justice for other minorities. He seemed to have an instinct that he might have to die to achieve the justice he demanded, but had always claimed that “a man who won’t die for something is not fit to live.”

When he first learned of threats to his life in 1964, he said: “If physical death is the price that I must pay to free my white brothers and sisters from a permanent death of the spirit, then nothing can be more redemptive.” The tragedy of his death is lessoned only slightly by the knowledge that, by creating a martyr, those that engineered his assassination unwittingly ensured beyond a shadow of a doubt his ultimate victory.

Next: A Theory of Justice

How can we apply the principle of civil disobedience to the culture of mass consumption and carbon excretion?

zenBen: well in some respects you're jumping ahead of me. :) I'll end this serial with a discussion of how civil disobedience relates to us today, so we should perhaps hold any serious discussion until then.

But, briefly, civil disobedience is a tool for changing things at a governmental level - the culture of mass consumption is arguably rooted in individual behaviour. Personally, I think the change is in the air for this already and the next generation will inherit a different attitude to the use of resources, but there is (as ever) still a lot to be done.

Hope all is well with you!