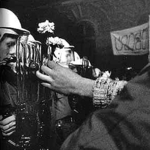 1989 was an incredible year. In January, the Soviet Union finally began to pull out of Afghanistan, and by February 15th they completed their withdrawal. On March 27th, the first free elections for the Soviet parliament took place. And perhaps most memorably of all, on November 9th, East Berlin opened the roadblocks and allowed its people to cross into West Germany unhindered for the first time in decades. The following day, ecstatic Germans began tearing down the Berlin Wall, signifying the end of the Cold War.

On Friday November 17th, riot police suppressed a peaceful demonstration by students in Prague, then the capital of Czechoslovakia. The students in question were members of the Socialist Union of Youth, and deeply opposed to the Communist Party’s oppressive leadership. However, they had been reluctant to demonstrate for fear of reprisals. The clash with the police ignited vehement opposition to the Communist rule of Czechoslovakia, and a series of strikes followed.

Protests in the streets increased in attendance daily: just three days later, there were half a million protesters when there had been 200,000 the day before. The students went on strike, and were joined first by actors and theatre employees in Prague, then later by the whole of the nation. A two-hour general strike on Monday 27th November was supported by three quarters of the population. By the end of the year, Václav Havel – a former dissident – was appointed as President, and Communist rule of Czechoslovakia came to an end.

Known as the Velvet Revolution, probably in reference to the velvet ropes in the theatres where opposition groups met, it is also known in Slovakia as the Gentle Revolution. Although a complete success in achieving its goals through civil disobedience, it was not without it costs. In particular, the people of the newly freed nation were unable to agree upon a name, a situation which eventually resulted in the dissolution of Czechoslovakia, and the formation instead of two separate states – the Czech and Slovak Republics – in the so-called “Velvet divorce”.

The Velvet Revolution was not the only successful application of civil disobedience in 1989 – in fact, it was in many respects the culmination of a series of revolutions sometimes called the “Autumn of Nations” (in reference to the “Spring of Nations”; a series of revolutions in 1848). This remarkable period of history begins with the Solidarity movement in Poland (beginning in 1981, but culminating in 1989), the Singing Revolution and “living chain” in the Baltic states of Estonia, Lithuania and Latvia, and the bloodless revolution in Bulgaria that removed the Communist government there.

Ten years later, further non-violent revolutions followed. In 2000, the Bulldozer Revolution in Serbia brought an end to the rule of the dictator Slobodan Milošević (a campaign of civil disobedience that began with, and was guided by, a student organisation called Otpor – many of whom were avid players of computer strategy games). Three years later, the Rose Revolution in Georgia peacefully overthrew Eduard Shevardnadze, and the year after that Ukraine rose up in the infamous Orange Revolution, as Ukrainians refused to accept the results of an election that had been thoroughly corrupted by voter intimidation and fraud. Perhaps a million Ukrainians protested in Independence Square, in the centre of the Ukrainian capital of Kiev, despite the freezing December weather.

The effectiveness of the so-called “Colour Revolutions” of the early 2000s even spread to nations outside of Europe. Following the assassination of opposition leader Rafik Hariri in 2005, the people of Lebanon conducted organised civil disobedience to demand the withdrawal of Syrian troops, ending more than thirty years of occupation. This “Cedar Revolution” was the first non-violent revolution to be conducted in a Muslim nation.

Civil disobedience has gone from being a mere idea in the mind of Thoreau, through to being a powerful method for change forged by Gandhi and refined by Martin Luther King, Jr, on to becoming an unstoppable political tool for change, one that effectively stripped away the power and influence of the Communist party, and contributed significantly to the fall of the Soviet Union, as well as offering the possibility of change further afield. When people want to live in a democratic state, civil disobedience provides the tools they need to make it happen.

There are, of course, situations in which civil disobedience would not work. An activist such as Gandhi living in Nazi Germany would have been swiftly eliminated. But this does not give us the answer to the more interesting question: could a person like Gandhi living in Germany in the 1920s and 1930s have prevented the rise of the Nazi party in the first place?

As a tool for change, non-violent resistance is superior to the alternative in a great many ways – not least of which being the capacity to earn the sympathy and support of the world for the goal being sought. Terrorist organisations employing violence and fear to pursue their agenda should seriously consider abandoning such extreme measures, tactics which turn the people of the world resolutely against their cause. Non-violent resistance is more effective than terrorism, and offers our best hope for lasting peace.

Next week, the final part: The Duty to Dissent

So perhaps there is hope, if only enough of the populace can be illuminated and mobilised at the same time, maybe we won't all end up like a monitored cattle herd with RFID tags in our arms. Or maybe everyone is too scared already, to resist the idea that absolute governmental power is necessary for their security.

Well, next week's final part of this serial deals with this point, although probably not in quite so paranoid terms. Always trying to skip ahead, zenBen... ;)

It's hard to ignore the fear-mongering, and the wonder whether the govt.s implicitly encourage the media to do that as a fearful population will welcome stupid security measures that impinge upon freedoms.

*shudder* Paranoia maybe, but also alarmingly visible in the current apathy at some Western societies moving towards police states.

make that *all western societies. it is inevitable and inherent to these states trying to maintain authoritarian control over increasingly complex system as society and its environment.

A good point - if one assumes the natural reaction to the loss of power will be measures to stem that loss, then in face of developments like the internet, the globalisation of formerly nationalistic mindsets in the young, and the growth of critical (rather than vocational) education, it is only natural to view civil liberties as the obvious hinge-point on which to apply leverage to keep citizens 'in-line'.
The same process has been at work in the smaller, but in some ways similar, model of the music industry.

It may be paranoia to assume that all these things are actually being done, or are the motivation behind what is being done - but it is not paranoia to assess the world critically and logically, with the best information to hand, and arrive at conclusions. It only seems paranoiac because the conclusions are more and more worrying with every assessment.

"It only seems paranoiac because the conclusions are more and more worrying with every assessment."

To quote Joseph Heller: "Just because you're paranoid, doesn't mean they aren't after you." :D

But I must warn you: while rational assessment can be worrying, our capacity to predict the future as a species is appalling, and those who tend towards Rational temperament tend to slip into paranoia (such people - myself included - have mental faculties predisposed to paranoia).

It can thus be important to separate facts (in so much as a thing can be claimed as a fact) from assumptions.

Yes, I quite agree - the assumption overcomes the scantiness of evidence because 'it is the only logical explanation' or 'it seems so right it must be true'.

The key is the tipping point of assumption and action. When you act, you start to shape the landscape - then you may as well take your assumptions as fact, or you risk undermining your own actions with uncertainty.
The tipping point is wherever you feel obliged to become involved. If you walk down a dark alley and meet some hoodlums, you can assume what you like about them but you don't wait until they prove negative to act.

Where this point is in the global situation, I don't know.
For me, its a ways past my thesis!