Rose Tinted Games
You and Your Genes 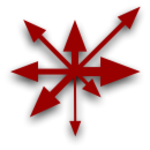 One of the recurring features of Michael Moorcock’s novels is the war between the forces of Law and the forces of Chaos. Indeed, the essential source of conflict in many of the hundreds of Moorcock novels originates in this tension, although how it is expressed can vary wildly, from vying pantheons of gods in the core Eternal Champion cycle, to competing political pressures in novels with settings closer to our world. When Law and Chaos are viewed as cosmic forces (such as gods), there is also another metaphysical power known as the Cosmic Balance, which strives to retain equilibrium between the two forces, since ultimate victory by either side in this struggle would mean the end of all life.

Chaos expresses unfettered possibility, and in fact within the fantasy novels the stuff of Chaos is the raw material out of which all things are formed. In the short story “The Dream of Earl Aubec”, part of the lands of the Young Kingdoms (where the Elric stories are set) is dreamed into existence by Aubec from raw Chaos. Within the fantasy milieu, the symbol of Chaos is an eight pointed star, representing possibilities. (The picture above is Walter Simonson's asymmetric version of the symbol, as used in the comic series Michael Moorcock's Multiverse). There is a beauty to Moorcock’s depiction of Chaos in a fantasy context, but it has a savage edge – Chaos lets nothing bind it, and certainly not morality.

The other side of Chaos can be found when it expresses itself in “real world” settings, or in those stories that are set in alternative histories of our world. Here, chaos represents something akin to liberalism, and ultimately anarchy, with a moral relativism that denies any kind of fixed context. The forces of chaos (which are rarely labelled as such in this kind of story) work to undermine the ruling powers and destabilise them, perhaps pushing as far as a return to the “war of all against all” (to employ Hobbes term).

Law, on the other hand, represents order and structure. Often, Law initially appears to be beneficent – in the Corum stories, the protagonist begins by allying with one of the gods of Law in order to defeat the rising tide of the lords of Chaos. However, it eventually becomes apparent that victory for Law means eternal stagnation, and the elimination of all living things (life being far too unpredictable to be allowed free rein in the eyes of the lords of Law!) The realm of Law presented in the fantasy story “To Rescue Tanelorn” and elsewhere is a barren wasteland, devoid of features. In the later Elric novel, The Dreamthief's Daughter, one such realm is described as follows:

[It] was no ordinary desert. It was all that remained of a world destroyed by Law. Barren. No hawks soared in the pale blue sky. Not an insect. Not a reptile. No water. No lichen. No plants of any kind. Just tall spikes of crystallized ash and limestone, crumbling and turned into crazy shapes by the wind, like so many grotesque gravestones.

The flipside to this is the expression of Law in more familiar settings, where it stands to represent conservatism, and ultimately totalitarianism. The rules, which initially provide justice and stability, become stifling, and when they become wildly out of balance the net result is as horrifying as the worst excesses of Chaos. Heroes in alternatives history stories are often fighting against the forces of Law (which are rarely identified as such in this kind of tale) in order to prevent harm to threatened peoples, or to destroy the ruling political powers – particularly in the Nomads of the Time Streams trilogy, which explores two or Moorcock’s perennial themes, racism and imperialism (both expressions of Law in the wider mythology of Moorcock’s work).

Thus, we can see Law and Chaos expressed at different degrees of metaphor in Moorcock's work. In the fantasy stories, the Lords of Chaos and the Lords or Law stand for either social and political forces, or in some cases specific political leaders – in the Hawkmoon stories, for instance, the gods of Granbretan are named after British Prime Ministers: The Howling God, Chirshil (Winston Churchill) and the Roaring God, Aral Vilsn (Harold Wilson) to name but two. In the later Elric novel, The Dreamthief’s Daughter, the Goddess of Law, Miggea is clearly a satirical portrayal of conservative Prime Minister Margaret Thatcher, for whom Moorcock has expressed considerable disdain.

In alternative histories and stories set in our world, Law and Chaos are not explicitly named, but the same political tensions expressed in metaphor in the fantasy novels are still played out within such stories. The conflict between these two political forces – liberalism and conservatism – is the essence of the thematic drive of Moorcock's work, with the core message that people should never permanently ally with one political faction or the other, since either force can become destructive if left unchecked. Rather, Moorcock urges his readers to be ready to support either side as needed in order to keep these two competing political and social forces in balance.

Moorcock’s original inspiration for the Law and Chaos paradigm came from Golden Age science fiction author Poul Anderson, particularly Three Hearts and Three Lions, but it was Moorcock’s fantasy novels which wove the idea into the heart of the counterculture. The use of Law and Chaos as alignments within the popular tabletop role-playing game Dungeons & Dragons owes a debt both to  Anderson and especially to Moorcock, although most players of fantasy role-playing games are rather unaware of this heritage. Additionally, the portrayal of Chaos within the Warhammer and Warhammer 40,000 settings was lifted out of whole cloth from Moorcock’s fantasy novels – even the phrases used to describe Chaos in these role-playing games are in places quoted verbatim from Moorcock novels, although the subtly of the original milieu is entirely lost.

There is no explicit concept of good and evil in the Moorcock mythology, although curiously Mike has himself said that he believes in “tangible good and evil”. To understand why the Moorcock metaphysics have no direct expression of good and evil, it is necessary to look at the nature of the centrepiece of all of Moorcock’s fiction: the ill-fated Eternal Champion, doomed forever to struggle.

Next week: The Eternal Champion

2001 AD's Nemesis the Warlock stories (and spin-off the ABC warriors) are a rather good exposition of this theme, as I remember. Nemesis was a brilliant character. That's if you like graphic novels.

"the portrayal of Chaos within the Warhammer and Warhammer 40,000 settings...the subtly of the original milieu is entirely lost"
In latter years the boom in publication of 40K novels has allowed some more nuanced work to slip through. In particular, novels about the Imperial Inquisition are good starting point.

Although I haven't read any Mills comics for almost a decade, I remain a big fan of his work - particularly those three strips, and his Marshall Law work.

The early work was stark yet charming; increasingly, however, Mills seems to have been pushing more for the former and less for the latter, which is a shame.

I just re-read for the first time since 1979 the first story from Doctor Who Weekly (which I also enjoyed as a kid) which was a Mills/Wagner affair. My whole appreciation for comics seems to be rooted in the work of Pat Mills! :)

Moorcock was my first real introduction to philosophy. I think I read 12-15 of his books in my youth.

Those ideas in me later evolved into the non sci-fi world, but always with the idea of law and chaos as two sides to the same thing. In some respects it can be juxtaposed to Aristotle and Plato, order and chaos. I think in the sci-fi context it takes on the aspect of a chaos mad warrior vs. a glowing paladin, but the subtext is so much greater. At its most distilled level it becomes the formless and the the shaper of the formless. I wonder if its a misnomer to think that chaos as evil, because in context, all sides do what they see as necessary.

Greg: "I wonder if its a misnomer to think that chaos as evil, because in context, all sides do what they see as necessary."

It seems to me that inherent to Moorcock's philosophy is the idea that evil is not a property of one's allegiance but of one's actions. Since Chaos is not an entity, as such, but simply a grouping of people (at least, outside of the deep fantasy settings) it cannot be good or evil - but the people who *follow* either path certainly can be!

Not much to say other than this is really very interesting reading for me, since all I knew about any of this until now was =from= Warhammer, and a little bit of D&D thrown in. I had a vague notion that some of it had been plagarised but I had no idea where from & how much.

I suspect how much of the subtlety remained (& remain!) in the various forms of Warhammer depended on the exact edition and the author's involved as I've found that to be vary wildly over the years. I must admit in my youth I found the stuff in the original WFRP and 40K Rogue Trader rather interesting.. even if unbeknownst to me I was reading it through a filter, as it were.

Rik: glad this is interesting to you! Although Moorcock's name is well known in fantasy circles, I think there is a sense in which his tremendous contribution to the counterculture is radically underestimated. There is almost as much Moorcockian influence in role-playing games as Tokeinian! :)

zenben, Nemesis also has its ties to FLESH & Judge Dredd (Satanus), Invasion (The Volgans, the enemies of the ABC Warriors) which appeared before the Ro-Busters.