Malone on Curiosity
Skimming the Internet 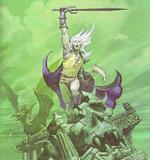 The fate of the Eternal Champion, the central character (or characters) in the mythological framework within which the majority of Michael Moorcock’s novels are set, is eternal struggle. In myriad worlds and times, the hero is reborn and finds himself or herself placed in a situation of conflict. Often, the Eternal Champion begins allied to one faction but gradually becomes aware that their side is a dangerous force for racism or imperialism, causing the Champion to betray their allies and fight on behalf of their original enemies. Elric, for instance, is the crown prince of the island kingdom of Melniboné which once ruled over the whole of the Young Kingdoms with cruel detachment, but ultimately brings a horde of sea raiders to sack the Dreaming City, betraying his blood kin and driving the surviving Melnibonéan refugees into exile.

The ultimate archetype of the Eternal Champion is Erekosë, who first appears in the 1970 novel The Eternal Champion. Unlike other incarnations of the Eternal Champion, Erekosë remembers being reborn time and time again to strive and die in eternal conflict, and thus is the most tortured of the various incarnations Moorcock has written about. In the first Erekosë book, the hero is summoned by humanity to fight against the inhuman Eldren, but when incarnated he has distinct memories of being John Daker, an ordinary twentieth century man, and other fragmentary memories of other lives. He begins to doubt his human allies when he sees their brutality in war, and eventually switches sides and exterminates humanity to save the Eldren. (There is a sense in which Erekosë’s suffering originates in this savage betrayal of humanity). Tortured by dreams of other struggles he has fought in other worlds, we also see in Erekosë a wider theme – that humanity is doomed to eternal struggle.

Although Moorcock did not expressly follow the template of the heroic monomyth described by Joseph Campbell, by reading a voluminous quantity of novels he seems to have gradually absorbed the essential elements of this mythological quest structure and incorporated it into his own work (perhaps most explicitly with the second Corum trilogy, which draws heavily from Celtic mythology). Just as Campbell’s “Hero with a Thousand Faces” will experience a different fate depending upon his or her actions at each stage of the heroic quest, so Moorcock’s Eternal Champion can be doomed to suffer eternally (Erekosë), tortured for their betrayals (Elric), find a brief respite from struggle (Corum) or find peace (Hawkmoon) according to the moral calibre of their actions.

Another symbol intimately tied to the Eternal Champion mythos is the Black Sword, within which a dark and malevolent entity resides. The most famous incarnation of this is Elric’s howling runesword Stormbringer, which steals the souls of those it slays, giving Elric strength in the process. The Black Sword stands in part for the price of power – the wielder becomes a near unstoppable force by employing its dark strength, but loses their moral perspective, and gambles with the lives of those they love. Elric, who as an albino is naturally weak and requires magical herbs just to remain alive, depends upon the strength Stormbringer provides him, but the blade betrays him over and over again, bringing him nothing but misery – slaying first his lover, later his best friend, and ultimately Elric himself. The Black Sword is a powerful metaphorical warning, akin to Baron Acton’s adage “power corrupts and absolute power corrupts absolutely”.

Some of the incarnations of the Eternal Champion fight on the side of Law, but end up defeating it (Corum), some fight on the side of Chaos but ultimately strive to defeat it (Elric) while some fight against Law or Chaos without expressly supporting the alternative. Hawkmoon, for instance, opposes the Empire of Granbretan – an allegory of early British imperialism – which represents the domination of Law, but never fights expressly for the forces of Chaos since these are not directly represented in his post-apocalyptic world. To some extent, the Eternal Champion can be seen as fighting for the Cosmic Balance – striving against whichever side has the upper hand in order to restore equilibrium, although they rarely if ever are aware of this fate.

However, there is a certain sense in which the ultimate fate of the Eternal Champion might be to overthrow the very need to struggle – that is, to destroy the Cosmic Balance – a theme which becomes explicit in Moorcock’s first attempt to close the Eternal Champion mythos, The Quest for Tanelorn (first published in 1975). In this story, the Black Sword and the Cosmic Balance are explicitly presented as conflicting yet interdependent forces, with the dark entity inside the sword desiring the destruction of the Balance which holds it back from absolute dominion. The Black Sword here stands for conflict and war in a wider political sense, and is represented as a threat to the whole of humanity.

The different paths of the Eternal Champion’s incarnations holds a key to understanding why Moorcock has said he believes in “tangible good and evil”, yet good and evil are never explicitly represented. There is an existential philosophy at work in Moorcock’s writings that originates in French influences such as Camus and Satre, whom Mike read in the fifties. From this background comes recognition that there may be good or evil actions, but not good or evil causes – one cannot choose to “side with the good”, as such, for “good” is a metaphor and not a faction; one can only choose those actions that are just and fair in the circumstances that one faces. This can be seen in the betrayal tableau that recurs with the doomed manifestations, who suffer in some respects out of an inability to find a way to bring the good out of the tragic (‘good’ here representing something like the well being of the many, and ‘evil’ representing acts of selfish cruelty or greed). The closer to a benevolent course of action the hero is able to achieve, the more felicitous the Champion’s eventual fate.

And yet, death is not the end for the Eternal Champion – especially for doomed-to-remember Erekosë. This circumstance arises from the backdrop against which the Eternal Champion stories are set being not a single world, but a vast and complex multiverse, many different planes and dimensions between which the Champion sometimes crosses to pursue her (or his) quest. Within this idea lies a further subtlety in the metaphysical themes of Moorcock’s work.

The opening image is the cover from the 1985 Granada/Panther Books edition of Stormbringer, by the artist Michael Whelan. As ever, no copyright infringement is intended and I will take the image down if asked.

Next week: The Multiverse

Tolkien's Turin was the epitome of this character model!

I don't know about that. Sure, Turin is similarly tragic and melancholic in that larger-than-life way, but there's no philosophy in that story, it's just an emotional story. But when reading Moorcock's stories, it's rather obvious that you (the reader) are supposed to see more than what is just written.

Well let's not have a Tolkein vs Moorcock fight break out or it'll be carnage! :D

In my opinion, Tolkein's strength was in two specific areas: creating mythology in the style of historical mythology (The Silmarillion is a work of expert care), and writing in a charmingly lyrical prose style.

Tolkein's weakness is perhaps structuring: The Lord of the Rings rambles and clearly lacked planning. People are divided on whether the split of the narrative into having two protagonists is genius or blunder - I sway to the latter camp. Frodo was clearly the intended hero, but Tolkein just becomes infatuated with Aragorn and thus promotes him to protagonist #2 later on - yet leaves in pages and pages of Frodo bitching about how cold he is and how heavy the ring is... >:)

Conversely, Moorcock's weakness in his early work is the rough edges caused by the speed at which the books were written. In his later work, the writing is first rate, but it is not always accessible... The two writers have, on the whole, very little in common beyond that they both wrote fantasy novels!

But I don't think it's fair to assert that Moorcock has a deeper reading and Tolkein does not - although I would suggest that Moorcock's work is more overtly allegorical.

I don't remember Turin very well, alas, but the reason there is a possible parallel is probably because Tolkein is drawing from mythological structures directly, while Moorcock has constructed a mythological structure of his own which draws from historical mythology indirectly. There is common literary inkwell that both are dipping into. ;)

Turin's story has a lot of versions. There's a short version in the Silmarillion. Then there's the extended version in Unfinished Tales. And then there's the new book - Children of Hurin. I thought that this new book was a rather good read as a plain reading material.

Anyway, aside from the larger-of-life melancholia and the black sword, I don't really see that much in common between the Eternal Champion and Turin.

Turin's a big oaf. He has a kind heart and is emphatic towards those who suffer, however his fault lies in that the acts before he thinks or he wants to have his will by any means as possible.

Wait. Yeah, it does sound like Elric. I guess I'm wrong then.

Perhaps it was the different tone in these stories that confused me.

Never read Moorcock, so can't comment further. I will say that most if not all the Tolkien 'greater' heroes (i.e. elves and men of the west, dwarves and hobbits not being elf-kin diminishes them, it seems) have what seems to me to be a similar plight to the eternal champion. They're stuck between light and dark, and often they struggle ceaselessly only to see their own actions destroy what is most dear to them.

I suppose the thing is, since the Eternal Champion draws upon an infinitely more ancient archetype (the "Hero with a Thousand Faces" in Joseph Campbell's formulation) it's hardly suprising that one can find parallels in other work with a mythological bent. ;)

On the Elric/Túrin Turambar parallels: both are - to varying extents - derived from the Finnish myth of Kullervo; Tolkien specifically mentions Túrin as being derived from Kullervo in a letter, while Moorcock's year spent in Sweden/Norway in the early '60s (prior to the publication of Elric) at least suggests he may have come across the myth. Although the earliest versions of Túrin pre-date Elric/the EC by several decades, the Tale wasn't published (in "The Silmarillion") until many years *after* Moorcock's stories. Any similarities therefore between Moorcock and Tolkien (and I think they're mostly superficial actually) probably stem from an common influence (Kullevro) rather than one author being influenced by the other.

demos99: thanks for this informative insight! Much appreciated.