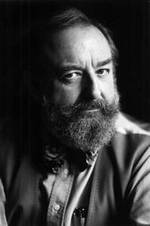 My grandmother bought me my first paperback by Michael Moorcock back in 1982, knowing that I had a penchant for fantasy stories. It was the Knight of the Swords, the first of the Corum novels, and I devoured it voraciously in just a few hours – hungry for more. Over the years, I was eventually to read essentially everything that Mr. Moorcock has written, and my bookcases contain three shelves of his work, much of it dog eared and well thumbed. To be honest, I don’t think my nan would have appreciated much of what Moorcock writes about, but she was delighted to have found a present I enjoyed, and continued to bring me Moorcock novels from time to time over the years.

Moorcock’s work occupies a strange place in the literary world. Most famous (and commercially successful) for his fantasy novels, in particular the Elric series, he has also achieved substantial acclaim for literary works such as Mother London (which was shortlisted for the Whitbread Prize) and the Between the Wars sequence, in which a self-deluded narrator provides a uniquely fantastical account of the two world wars. He won the Nebula award for best novella in 1967 for his atheist fantasy Behold the Man, in which a time traveller finds himself taking the role of Jesus (which most Christians will find highly offensive), and the World Fantasy Award for best novel in 1979 for Gloriana, his sumptuous tribute to Mervyn Peake’s Gormenghast trilogy, not to mention dozens of other accolades including five lifetime achievement awards.

There is no doubt that Moorcock has had a prolific output. Many of his dozens of fantasy novels were written during his time as editor of the influential science fiction “New Wave” magazine New Worlds, between 1964 and 1971. In fact, a substantial number of these books were written to pay the bills while striving to keep the magazine going – Mike claims that he asked his publishers what the shortest manuscript they would accept would be, then wrote books to that length, often in as little as three days. “It shows!” I joked, when asking him about this at a book reading in Manchester several years ago.

Unusually, while the individual collections of stories follow different protagonists – such as the aforementioned Elric, and the cult antihero Jerry Cornelius who achieved considerable literary fame in the late sixties and seventies – they also form elements of a wider whole, which can only be appreciated by reading the greater part of the Moorcock canon. This wider framework – which can be collectively referred to as the Eternal Champion mythology – has its own metaphysical themes.

The metaphysics of Moorcock’s writing, however, are not concerned with spiritual or religious matters, but rather ethical (and hence political) themes. Moorcock believes morality and story structure are closely linked, and that the moral of a story is implicit in its structure; his work thus explores a variety of moral themes by using a variety of different structures. Although many of his stories are tales of wizardry and wild romance, the thematic content concerns more existential matters, and in particular questions about conflict, imperialism, and human nature. Although early attempts to explore these kinds of issues in a metaphorical manner were less than successful (Moorcock criticises his own early novel, The Golden Barge, as being clumsily rendered, for instance), as his writing has matured, so have the metaphors and metaphysics within his stories.

In this serial, we’ll look at some of the key elements of Moorcock’s metaphysics, including the idea of Law and Chaos made famous by the tabletop role-playing game Dungeons & Dragons (which owes its roots to Moorcock’s writing), the infinitely varied planes of the Multiverse, and the central motif of the Eternal Champion within which the entire Moorcock milieu can (with exceptions) be interpreted.

Next week: Law and Chaos

Having read this for the first time, I really think it will be a joy to continue, very interesting!

Thanks for the comment, Kenny! Hope the rest of the serial will continue to interest you. :)