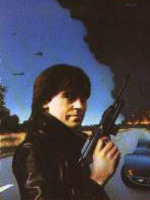 It may be the case that the overall popularity of the fantasy genre has contributed to the Jerry Cornelius stories being overlooked in recent years in favour of the Elric novels, but there was a time when these four books were considered essential reading, and they have influenced an entire generation of creative talent, including Alan Moore, Jonathan Littell, and Grant Morrison, not to mention inspiring other writers from Moorcock’s own generation including Brian Aldiss, Moebius and Norman Spinrad. But what are these books, and what is the appeal?

The first novel, The Final Programme, which was written in 1965, begins with an armed raid on a remote fortress which is an event-for-event retelling of the story of Elric sacking the city of his kinsmen from an earlier story (later collected into The Weird of the White Wolf, and other volumes). It is a reference that most of Mike’s readers would recognise, since he had earlier made quite an impact in the counterculture with his albino antihero. Jerry Cornelius, the central character, takes the role of Elric, and all the major characters are neatly substituted. Jerry is clearly an aspect of the Eternal Champion, but no longer in a sword and sorcery setting. Here he is an assassin for hire, a secret agent and a bisexual playboy – he is, in effect, the Eternal Champion for the late sixties, a spy thriller for the cultural underground.

But all sense of conventional heroics gradually devolves in the central quest of the novel, which involves attempts to thwart the mysterious Miss Brunner in her attempt to build a supercomputer for nefarious ends. The story takes upon an otherworldly feeling in its descent beneath the surface of the Earth and its eventual conclusion, leaving the reader not quite sure what has happened, but thoroughly swept up in the ride. The impression one gets is that here is an expression of the Eternal Champion mythos into what was then the modern day. But this is only part of the story.

In the subsequent novels, the narrative warps and changes in strange and paradoxical manners. In A Cure for Cancer, Jerry is still a hip secret agent, but there is no clarity as to what is going on. No-one in this novel seems to really know anything substantial, other than having an awareness of the gradual decay of civilisation or something close. Jerry doesn’t even seem that interested in stopping what’s happening, even if he could, and is more involved in an aesthetic, artistic quest than a political one. The disorienting passage of the narrative is heightened by an unconventional structure, such that the climax takes place in the middle, and not the end, and the resolution of the plot happens roughly three quarters through. It’s a wild ride that whets the appetite but confounds expectations.

Even this falls short of the disorientation of The English Assassin, during which Jerry spends almost the entire novel having a serious nervous breakdown while being carried around in a coffin. The story focuses entirely on other characters, who experience a series of eight different catastrophes within their collapsing society. Jerry appears only at the end, bursting out of his coffin onto the beach in a Pierrot costume – a rustic clown character from the Commedia dell’Arte. The reader can be justifiably bemused by this turn of events, and yet anyone who has made it this far into the sequence recognises that what is going on here is not conventional fiction.

The Pierrot reference makes explicit part of what is going on in these dizzying novels. The Commedia dell’Arte was a dramatic form which reached its maturity in Renaissance Italy. The essence of the form was improvising plays from a given theme (the way children make up games, and role-playing gamers create stories). Each of the characters is a stereotype of a certain kind of person in Italian society from that era. So there is Pierrot, the sad fool who with an unsophisticated wit still manages to foil his enemies at time, Columbine, who Pierrot is in love with but will never have, Captain Fracasse, a pompous blowhard with dubious military conventions, and a host of other stock characters.

The Commedia dell’Arte provides mythology on a human scale, and this is what Moorcock weaves via a similar technique – a stock set of characters, such as Jerry and his brother and enemy Frank, Jerry’s beloved sister Catherine, the occasionally evil Miss Brunner, the grotesque Bishop Beesley and so forth, face situations on a theme – that being, the catastrophic collapse of society. This becomes explicit in the title of the 1971 collection The Nature of the Catastrophe, which featured stories by ten authors, including Moorcock, Aldiss and Spinrad, all experimenting with the technique that Moorcock was developing.

Moorcock has said on the subject of the Jerry Cornelius stories, that they are an attempt to liberate the narrative – to leave it even more open to interpretation than conventional stories. The whimsical events and references within the novels are a complex set of allusions meaningful (and explicable) to Mike but thrown together in such a way that the reader is essentially required to bring their own meaning, in a manner not dissimilar to the acclaimed but inaccessible Finnegans Wake, by James Joyce, which via a constructed language invites the reader to experience something beyond conventional narrative forms.

In fact, Mike actively encouraged other authors to experiment with the Jerry Cornelius mythos in what might be considered an early open source project, the aforementioned The Nature of the Catastrophe being one product of this. (It is perhaps because this freedom had been given that Mike has been less pleased with Grant Morrison’s tributes to Jerry Cornelius – creating new characters inspired by Cornelius rather than contributing to the mythology directly). Indeed, this wider collaboration is ongoing, and Jerry Cornelius has recently appeared as a child in Alan Moore’s The League of Extraordinary Gentlemen, and will shortly be appearing in the new comics in this series. Jerry, it seems, just won’t stay down.

The conclusion of the Cornelius Quartet, The Condition of Muzak, first published in 1977, is even more surprising than its predecessors. In this story, Jerry Cornelius is no longer a hip secret agent, but simply a confused teenager, his exploits revealed as adolescent fantasies. Society is still seen in a state of collapse – here, Europe is a surreal collection of splintered city states – but there is little doubt here that Jerry is an ineffectual nobody in this world. The climax concerns Jerry’s foul mouthed mother (a considerably more terrifying figure than the villains of the earlier stories!) revealing the twisted family history... The novel won the 1977 Guardian Fiction Prize, and was hugely lauded. A reviewer in the Times noted: “The realisation comes that Jerry is seeking sanctuary in different universes of Time in separate private mythologies. As indeed, is the implication, are we all.” It is Moorcock’s existentialism expertly rendered.

The four Cornelius novels form a sequence that begins by connecting the Eternal Champion themes into the political context of the 1960s, and then gradually plays with and deconstructs the theme of the decline and collapse of society. Eventually, the narrative has become so deconstructed that it is revealed as teenage fantasy – Moorcock has created a new superhero (or rather, antihero) for his times, then carefully and methodically exposed that hero as a fool, a harlequin and a dreamer, destroying and reinventing the very mythology he had built up.

This is not the only time Moorcock has reinvented and expanded upon the Eternal Champion mythos of his earlier work. From 1991, Mike began reimagining his existential mythology into a new form, one which complements yet expands upon its roots. It is this regeneration of themes that we shall look at in the final part of this serial.

The opening image is the cover from the 1987 Grafton Books edition of the short story collection The Lives and Times of Jerry Cornelius, by the artist Tim White. As ever, no copyright infringement is intended and I will take the image down if asked.

Next week, the final part: The Game of Time