Back from Poland
The Change at Nintendo 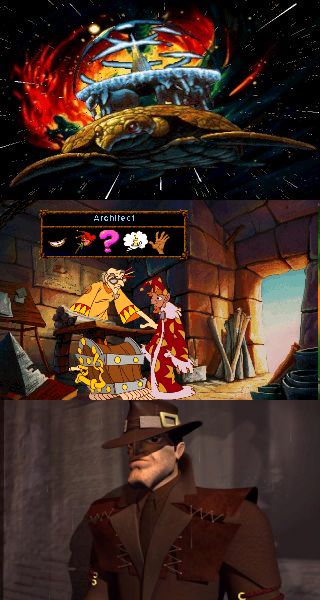 It gives me great pleasure to announce that the ScummVM team have been provided the source code to the Discworld games (Discworld, Discworld II: Missing Presumed...!? and Discworld Noir) by John Young, the tireless lead programmer for the trilogy, and are proceeding to make free-to-play versions of all three games for distribution over the internet.

As my regular players will recall, my first videogame industry job was with Perfect Entertainment, the makers of the Discworld games, and I had the pleasure of working on the second game, as well as serving as game designer and script writer of Discworld Noir (my first game as a lead). Noir was very well received in Europe, but lost out in many Adventure Game of the Year awards to Grim Fandango.  There was never a North American release of Noir because GT Interactive, the publisher, went bankrupt around the time of the European release.

I was first contacted about the Discworld ScummVM project by James "Ender" Brown several years back, as he needed my help on various fronts. I was able to confirm with Angela and Gregg (the directors of Perfect Entertainment) that there were no inherent legal problems, and also able to get permission from Terry Pratchett for a free release of the games, but the last step - the source code - was proving tricky as John was busy with a new family and a hectic job. Fortunately, he found time earlier this year to track down his source code and passed it onto the ScummVM team.

They don't have playable versions of the games yet, and they won't be able to tell you when they will (although I will be sure to mention it here when they do), but anyone interested in the project can go to the ScummVM homepage to learn more. James notes:

The subteam working on Tinsel support already has a alpha engine with DW1 completable, and are making excellent progress - see this blog post. We'll announce when Discworld support is committed to a public build on the main ScummVM homepage. If people want to jump in, there is a Discworld thread on our forums which people can chime in on if they want - just make mention not to ask when its ready! At the moment there isn't much help needed, but once we are happy with the quality of the initial engine we'll be calling for beta testers.

I'd like to thank the ScummVM team for working tirelessly towards the preservation of these games for posterity, and I wish them best of luck on the project! I'll announce any news on this here in the future, but you can also check their website directly if you want to see how things are progressing.

That's good news. Somewhere I still have originals of these!

That's fantastic! I'm assuming that when the games are playable there will be an announcement here.

Yes, I will post as soon as they have anything ready to beta test, and/or completed (assuming they let me know!) :)

Excellent news! Amazing! :D I love the games, well, the first one mainly, and I never got the third - I would love to play it.

I wonder if they'd be able to contribute the original code, and any remakes, to various video game archives too. Not often freely released remakes are allowed!

Hi there,
I am Max Horn aka Fingolfin, one of the ScummVM lead devs. Nice post, but not completely accurate: John only gave us the source code to DW1 so far. He promised to find the DW2 source for us, and I hope we'll get it soon, though he's apparently quite busy. On the up side, though, the DW1 engine works perfectly already. We are just cleaning up some bits.

Finally, we currently have no plans to support Discworld Noir.

Nice . . . updating old games so that they can run on today's systems is always a good thing if for no other reason than simply for nostalgia.

Max: way to crush my dreams! :) Very disappointed to hear that Noir isn't going to be supported. Oh well, thanks for the clarification and hope you guys ultimately change your mind about this! ;)

Hi Chris,
Do you know anything about the Discworld version for the Philips CD-i console? In theory that version was finished, but never saw the light of the day.

Yokohama: I don't know much about this... If it was made, it was made about the time I was joining Perfect Entertainment. I suspect they ported the first game over to the new device, but since there was no publisher demand for titles on it, there was never a release version.

If you want to know in order to record the information in a reference guide or something similar, I can write to the people I used to work with and build together the story concerning it - let me know if this would be useful!

Hello Chris,
That would be awesome! For years we're trying to get any info o the CD-i version of Discworld, but it seems like a dead end to us. Maybe you can help us asking the right people? It's certainly possible Discworld CD-i was handed out to solely one man externally, which has been the case with more CD-i ports. At my URL you can look up a lot about what we have done investigating Discworld CD-i, I hope you get in touch to help about this mystery! With regards, Bas

Bas: please go to my company site - ihobo.com - and email the contact link there with your request. It will get forwarded to me. I can then forward your enquiry to Angela and Gregg who ran Perfect Entertainment when the CD-i version was issued, and I can find the answer to your question.