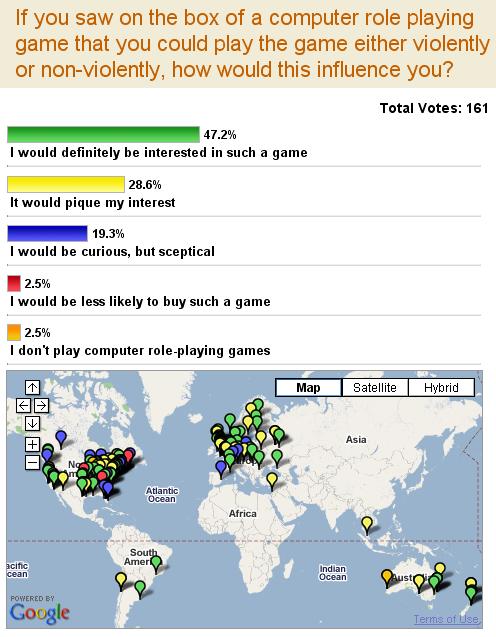 I missed the original survey, but I'd absolutely play it if only to satisfy my "lets watch the trainwreck" impulse. Combat is so much cheaper per game hour to produce, that I suspect the proposition is doomed.

I can't wait until someone pleasantly surprises me.

Dang. That american east coast sure is a busy place.

Edward: I hope to surprise you here! We have a mechanism for non-violent play in a computer RPG that is implementationally *cheaper* than the combat mechanics by nearly an order of magnitude. Otherwise, we wouldn't be trying. ;)

Sirc: if you look closely, it's not just the East coast, but the Midwest and all the way to Texas. It's the Rocky mountains which creates such a big blind spot in the survey map. ;)

Dang. That US sure is a busy place.

There's a sub-genre of these games called "stat-raising" games, which have an rpg-like element of personal statistics.

In such games, time is usually the limited resource, so you choose what to do in each game day, and it affects your statistics. (eg. often the thing is set in high school, so choosing to study will increase your academic stat, etc.) Often there's also minigames, puzzles or conversational choices involved too.

Anyway, the statistics you acquire choose your path through the game and the endings available to you.

(this can vary - the most stereotypical example is some girls require high stats in certain categories before you can woo them. Alternatives such as "Princess Maker" have you raising the stats of an adopted daughter by choosing what activities and jobs she does, which ultimately affects her personality, and her ending "adult life". Which includes meeting the prince and becoming a princess, of course. But also includes falling in love with you and becoming your wife, or running away to become a prostitute, or many others. Those zany japanese :P )

A simplified example can be found in the recent PS2 game Persona 3. Although half of the game is a traditional dungeon crawling RPG, the other half is a streamlined stat-raising dating/social sim game. It's simplified in that there arent many choices or gameplay in that half of the game, and no variance in outcomes - the social aspect in Persona 3 is designed to complement the combat aspect by "powering up" certain abilties of the character.

zeech: I find this kind of Japanese social RPG to be interesting, not least of which because it only seems to sell inside Japan. Why should that be? I'm tempted to say that it's because these games are too offbeat to be exported, but that doesn't address the question of why we don't get more Western versions of the same thing. I feel there should be a market somewhere.

Thanks for the further observations!

I dont know if its the chicken or the egg, but it seems like western developers simply dont have skill pool necessary to develop such games. Quality and quantity together will eventually result in sales and a market. By definition, something is only "offbeat" if people arent used to it.

As I said in the "games as narrative" post, Japan regularly churns out hundreds of low-tech games composed entirely of text, voice, and anime portraits. These games occur both commercially and in their very large indy games markets.

In contrast, the skill pool of wannabe game industry employees in the west is much more composed of level designers and coders. Most of the funky procedurally generated graphics / physics-based toy indy games come from western/european programmers, for example.

I also get the feeling that the fact that the Japanese gaming market has traditionally been on fixed-technology platforms (they dont upgrade their PCs much or use it for gaming, and most gaming is done on consoles) versus the West, which has traditionally (until recently) been gaming on rapidly improving PC tech, has had a really strong influence on the skillbase of game devs and on the sorts of games that people make/buy.