Leave of Absence
Obama vs McCain 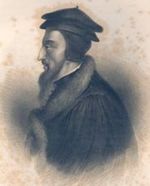 In describing the nature of the modern cultural experience in the West, Taylor talks at great length about our being cross pressured between the polar positions that triggered the nova effect we explored last month. This does not mean that the majority of individuals feel on a personal level the tension between orthodox religion and its materialist mirror image, but rather that our whole culture is caught between the two extremes:

…the debate in our society has to be understood as suspended between the extreme positions, of orthodox religion and (in contemporary terms) materialist atheism. It is not that middle positions don’t abound; not even that the number of people in such positions are not very considerable. It is rather that these positions define themselves (as we always do) by what they reject, and in our case, this almost invariably includes the extreme positions. Our culture would have to have evolved out of all recognition, were either of these to drop so far out of sight that this would no longer be true. In this sense, the cross pressure defines the whole culture.

Evidence of this can be found in many places far beyond the flagship struggles over Intelligent Design in the United States. In Germany, for instance, the government collects a voluntary “church tax” on behalf of various confessions. Taylor notes that there are a great many people with secular outlooks who “continue to pay the confessional tax which they could easily relieve themselves of by declaring themselves konfessionslos.” When people ask why, they reply that “they want the church to give moral guidance for their children” or that “they see the church as important for the moral fabric of society.” The relationship between individuals and religion is never as clear cut as the fanatics from either polar extreme would like to present it.

In so much as there is a debate surrounding these cross pressures, it involves the interpretation of the immanent frame that we examined two weeks ago:

In these cross-pressured fields, what is the debate ultimately about? One crucial choice which the immanent frame offers us is whether or not to believe in some transcendent source or power; for many people in our Western culture, the choice is whether to believe in God. To many it may not seem like a choice, because it has been foreclosed by their milieu, or their affinities, or their deep moral orientations; but the culture of immanence itself leaves the choice open; it is not foreclosed by undeniable arguments. Many however, end up taking a stand one way or another.

This leads to the first of a set of dilemmas that Taylor explores against the background of the cross pressures, the issue of the relationship between humanism and transcendence. His position is unusual, in that he recognises that the key issues which face both religion and secular humanism are actually shared problems – things that both must tackle in their own peculiar ways.

One aspect of this first dilemma that is particularly interesting to explore is the struggle between a “spiritual” and a therapeutic reading of people’s suffering, which opposes religion to unbelief. The position of people from the unbelieving stance is that the modern medical paradigm is vastly superior to the solutions to human problems provided by the church in the past – but is this faith in medical institutions well founded?

From another angle: casting off religion was meant to free us, give us our full dignity of agents; throwing off the tutelage of religion, hence of the church, hence of the clergy. But now we are forced to go to new experts, therapists, doctors, who exercise the kind of control that is appropriate over blind and compulsive mechanisms; who may even be administering drugs to us. Our sick selves are even more being talked down to, just treated as things, than were the faithful of yore in churches.

Taylor claims the move away “from a hermeneutic of sin, evil, or spiritual redirection, to one of sickness, has at best ambiguous results for human dignity.” The person themselves is often obscured in a medical practice which has learned to see anguish, melancholy or emptiness “simply as pathologies”. The therapeutic paradigm that has emerged in the last few centuries struggles to make a robust claim to superiority at a time when certain medical and psychiatric practices have been shown to make matters worse.

As Taylor present it, two particular criticisms form the centre of the struggle between humanism and belief in transcendence. The first, which Taylor terms the Romantic criticism (as a nod to the movement which originated the complaint), concerns the idea that religion, actuated by pride or fear, sets impossibly high goals for humanity and then in attempting to enforce those goals ends up mutilating what is valuable about being human. The second, which Taylor terms the Tragic criticism, is that religion tends to “bowdlerize” reality (that is, to sanitize by removing what is vulgar or unpleasant), making things seem far nicer than they really are under the surface.

These two criticisms are not quite contradictory, but there is “a strain between these two lines of attack”. The Tragic criticism, for instance, holds against more “liberal” or Deist forms of Christianity (which, as we have seen were the ante-chamber for the birth of exclusive humanism) but they don’t work at all against, say, Calvin (pictured above), who paints a picture of most of humanity being condemned to hell – far from bowdlerizing, Calvin’s picture offers an even more horrific predicament that what can be assumed from observation on the ground! Similarly, the Romantic criticism may work against this kind of savage “old time religion”, but it is rather less apposite when compared to more liberal-minded Christianity.

And this considers only the nature of this dilemma from the religious extreme:

Not only that, but the bowdlerizing charge holds as well against unbelieving humanisms which have too rosy a view of the harmony of interests, or the power of human sympathy; while the mutilating attack holds in spades against certain forms of atheist humanism which have driven the destructive attempts at total reform which litter the history of the twentieth century.

Rather than saying that Christianity falls under both criticisms, Taylor suggests that “it is the scene of an internal struggle of interpretations, whereby some seek to avoid one, but thereby fall more directly under the other, and others do the reverse.” And not only Christianity! “Unbelieving views may sell human beings short, in underestimating their ability to reform, but they may also put the bar too high, and justify some very destructive attempts at change.” Everyone – religious or non-religious – struggles to find a place to stand between these two errors.

In exploring the dilemmas that relate to these cross pressures, Taylor goes into far more depth than we can explore here. Of particular interest, however, may be his examination of the relationship between religion and violence, for which he draws upon discussions of what René Girard termed the scapegoat mechanism, in which a group of culturally-allied people will “turn on, kill or expel an outsider”. In a brief exploration of the forces behind the Crusades, Taylor notes that the church at the time was almost glad to have an external enemy to turn upon, as they had been trying for some time to make peace between bellicose noblemen to no avail. The scapegoat mechanism was a backdoor to violence that was not actually permitted in Christian doctrine. He parodies the Crusades quite neatly:

Do these people oppose the Prince of Peace? Let’s go and smash them! We have the self-given assurance of being that Prince’s most faithful followers, even while we violate his teaching.

But then, the problems of violence do not end with rejection of religion:

...all this can easily survive the rejection of religion, and recurs in ideological-political forms which are resolutely lay, even atheist. Moreover, it recurs in them with a kind of false good conscience, an unawareness of repeating an old and execrable pattern, just because of the easy assumption that all that belonged to the old days of religion, and therefore can’t be happening in our Enlightened age.

One of the most fascinating aspects of Taylor’s account of the cross pressures is his observation that “the camp of unbelief is deeply divided – about the nature of humanism, and more radically, about its value.” Thinking in terms of a two-sided conflict misses out something vital: it can instead be seen as a three-cornered struggle, as a result of “the immanent counter-Enlightenment”, for which Nietzsche is the standard bearer:

Taylor notes that you could also claim a fourth corner, if you consider those representatives of orthodox religion who believe that secular humanism “was just a mistake, which needs to be undone”.  Taylor rejects this view personally, claiming that “the practical primacy of life has been a great gain for human kind, and… this gain was in fact unlikely to come about without some breach with established religion.” He opposes “the metaphysical primacy of life espoused by exclusive humanism” as “stifling”, yet sees the emergence of that philosophy as essentially providential.

Through an exploration of the dilemmas that result from cross pressures between three different philosophical corners, Taylor identifies demands which both religion and exclusive humanism must deal with, including:

…finding the moral sources which can enable us to live up to our very strong universal commitments to human rights and well-being; and finding how to avoid the turn to violence which returns uncannily and often unnoticed in the “higher” forms of life which have supposedly set it aside definitively. Rather than one side clearly possessing the answers that the other one lacks, we find rather that both face the same issues, and each with some difficulty. The more one reflects, the more the easy certainties of either “spin”, transcendental or immanentist, are undermined.

Thus we find ourselves amidst the nova effect, searching for the way of life that will be authentic for us as individuals, recognising that where we find ourselves resting may well lie in an intermediate position between polar extremes that are equally subject to the cross pressures they outline in our modern culture.

Next week, the final part: Taylor on Christianity