The Twittering of Sparrows

This post forms part of the October Round Table. 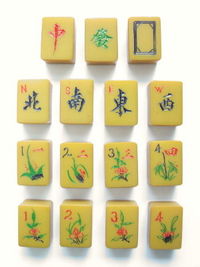 My earliest memories of playing games with my family were not videogames, but board and card games. We played many things, but none stands out in a nostalgic glow quite as dazzling as Mah Jong. Originating in China, this game is similar in many respects to rummy (in that it involves collecting sets) but both the play and the aesthetics of the pieces are vastly different.  The game remains popular among Chinese people around the world, as well as (oddly) Jewish women in New York, and the rules vary somewhat according to where you play, but the appeal of the game to those who have fallen under its spell is undeniable.

(I should explain, before we proceed, that the game most people associate with the name ‘Mah Jong’ is a solitaire game more properly called Mah Jong solitaire or Shanghai. Although it uses the same tiles, it is otherwise utterly different from the game the tiles belong to).

My earliest memories of playing are in my Nan’s bungalow, which my father had built for her by converting the garage next to the house we lived in on the Isle of Wight, off the south coast of the British Isles. I don’t know how old I was when I first joined in the games, but I suspect I was less than ten. The Maj Jong tiles and the wooden racks (for organising the tiles – unlike most Chinese players who somehow keep the tiles in their hand) lived on the top of a cupboard at one end of the lounge, and so had to be gently brought down and ceremoniously laid upon the table before we could begin.

We emptied the tiles out of the box. I think we used to play with an old ivory and bamboo set – not exactly politically correct these days, but impressively luxurious all the same. The tiles, each about half the size of a match box, were laid out on the table upside down in order to be “washed” before each hand. The players sweep the tiles around on the table, and as they collide they produce a gentle clattering – the Chinese call it “the twittering of sparrows”, and indeed the name “mah jong” means “the game of Sparrows”.

Once the tiles were suitably shuffled, we built the walls. Each player would line up two tiers of tiles against their rack, like stones being laid upon one another. Once the four walls were built, the players manoeuvred each into position creating a perfectly square set of walls. Traditionally, the walls had to be secure as when the dice are rolled a gap in the wall might cause some spirit or dragon to interfere with the destiny of the game (or at least, so Maj Jong folklore says – the game is actually only one hundred and fifty years old, although it has antecedent games that are far older).

One player, East wind, who had been selected at random before the wall is built, rolled dice to determine where the wall was to be broken, after which the tiles were dealt to each player. At first, Mah Jong tiles seem impossibly exotic when you are used to the standard deck of cards. Even the three minor suits – circles, bamboo and “characters” (which are marked with Chinese kanji characters showing numbers in increments of ten thousand) – have an esoteric quality, but this is dwarfed by the charm of the major tiles – the four winds, red, green and white dragon, and the seasons and flowers which provide additional bonuses. A high quality Mah Jong set is a work of art.

For a long time, I really didn’t know what I was doing in the game, but I enjoyed playing with my family all the same. Gradually, I began to appreciate that the key to the basic game is the value of the different combinations of tiles – a pung (three of a kind) in dragons, for instance, doubles your final score. There are many such sets which produce a double, and accumulating these creates a very great range of differences in your final score. In fact, Mah Jong players traditionally play with a limit (1,000 points in the official British rules) so the challenge becomes trying to achieve a limit hand.

At University, when I rediscovered my love of the game, I also opened the door to the ultimate challenge in the game. Most versions of the Mah Jong rules include a number of special hands with romantic names like Imperial Jade, The Wriggling Snake and the 13 Unique Treasures, most of which are worth a limit score. Not every player uses these rules – my family never did – but once you start playing with the special hands the landscape of the game is transformed. Not only can you aim for a high score through conventional means, you can be tempted to shoot for a rare special hand – you don’t get them often, but the score benefit is so high that even the attempt becomes worthwhile. The excitement one feels when you are ‘fishing’ (waiting for your last tile) in order to complete a special hand is comparable only to that moment in Poker when the turn of the next card could give you the nuts (the best possible hand). Utterly intoxicating.

Mah Jong remains one of my favourite games. The beauty of a well-made set of tiles; the formal ritualism of the washing of the tiles and the construction of the wall; the progression of East wind around the table (which has serious effects, as East wind pays and receives double – making it a potential benefit, but also a giant liability); the excitement of fishing for a limit hand, and the joyous fiero of achieving a special hand – all combine to make this game not only a cherished part of my memories of childhood, but also a continuing source of pleasure throughout my life.

A videogame can be a marvellous thing, but few electronic games have given me the wealth and longevity of enjoyment as Mah Jong. It was one of many gifts that my family gave me that I continue to treasure to this day.

Interested in trying Mah Jong? I heartily recommend the book "Mah Jong" published by A & C Black of London (1994), ISBN 0 7136 3742 0, which describes the British Mah Jong Association’s rules for the game, which are my personal favourite. You’ll also need a set of tiles, which you can find at any good boardgame store.

I find it interesting that several eastern games have special hands that dramatically alter the outcome of the game. When I first played Hanafuda (on the DS), I found it frustrating at first, but came quite appreciate it once I'd played a bit.

Something I will always be grateful to you for is introducing me to the wonderful game of Mah Jong. No matter how badly I suck, I love it.

Maybe next time I visit we can get a game of Mah Jong in alongside the poker.

I also first played it just under the age of 10... but I was started on American rules as they were the prominent players where I lived (in Saudi Arabia).

Well, I think a better example of getting the rare hand is shooting the moon in Hearts. The fact that Hearts was available as a Windows game makes it more relevant to a geekier audience.

Chill: that's a good parallel to the special hand experience, except as I recall the overall tone of this experience in Hearts is to dig oneself out of a hole, not to win big. The emotional profile is certainly very much alike, though.