Myths of Evolution (2): The Ladder of Progress 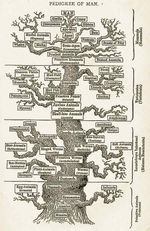 We are all familiar with the iconography of the “march of progress”, epitomised by the line of apes evolving into (for some reason) a white business man, but as Stephen Jay Gould has criticised, this iconography erroneously equates evolution with progress – a mistake compounded repeatedly by science fiction, which forever makes strange claims such as finding “more evolved” life that offers a “window into our evolutionary future”. The myth here is that evolution equates to progress, an error inherited from Darwin's contemporary Herbert Spencer, who was using the word 'evolution' to support his metaphysical belief in universal progress. Darwin purposefully avoided using the term 'evolution' (preferring “descent with modification”) because of the risk of this misunderstanding.

Gould suggests that drawing a putative line of ancestors tells the wrong story about evolution. “Diversification and stability, the two principal themes of natural history are entirely suppressed,” he writes in Ladders and Cones: Constraining Evolution by Canonical Icons, “the tiny, parochial pathway leading to humans stands as a surrogate for the entire history of life.” He furthers his criticism by examining sequences of paintings intended to show the progress of life on Earth – but which cease to show invertebrates as soon as the fishes arrive on the scene. But of course, 98% of species on our planet are invertebrates – they didn't go away just because more complex life arrived. He bemoaned this state of affairs, exclaiming “I know no other subject so distorted by canonical icons.”

The theme of progress also appears in another icon used to express ideas about evolution: the cone of diversity. This is a less well known image, but it occurs often in textbooks on evolution which show the “tree of life” as proceeding from a single trunk (the common ancestor) and then expanding into more diverse forms as time progresses. Gould notes that while the horizontal axis represents the variation in forms (diversity), the vertical axis of this model is supposed to represent time – but instead tends to be used to represent some notion of anatomical progress.

Consider Ernst Haeckel “pedigree of man” (pictured above), which has man at the pinnacle of the tree, surrounded by diverse mammal groups, with more “primitive” life lower in the branches. Gould observes that Haeckel has fallen into the trap of believing that the vertical axis can show progress, while the horizontal spread shows diversity – so to fit the implied iconography of a cone of diversity, Haeckel takes mammals – a small group of 4,000 species – and makes fine distinctions into whales, carnivores, primates etc., while insects – representing almost a million species – must occupy a single unbranched twig (about halfway down on the left) because as more “primitive” life they have to be fitted into a lower level.

Gould suggested that rather than a tree of life, the fossil record rather suggests a bushier “plant” iconography. He offered an alternative diagram showing a massive spread of diversity a short distance up the trunk (representing the “Cambrian explosion”, when multi-cellular life appeared in myriad forms in the blink of a geological eye), with just a couple of the many stems depicted continuing on to the present, splitting into small branches on the way. He referred to this as an “icon of a grass field with most stems mowed and just a few flowering profusely”. Gould's models, of which the most famous is punctuated equilibrium (developed with Niles Eldredge), stress the role of contingency – luck, if you will – in the development of life. “All our canonical icons are based upon the opposite notion of progress and predictability,” he accuses. Of course, Gould's icon embeds his preferred mythology of evolution, but it is nonetheless prudent to appreciate his perspective in this regard if we are to move beyond the myths of progress.

Instead of thinking of a ladder of progress – which tricks people into imagining the process can be projected forward, when in fact it can only be selectively represented from the past – I suggest we could gainfully consider our evolutionary heritage in terms of a chain of inheritance, an anchor to the past from which we gain our biological gifts. What comes in the future depends upon the conditions that will come – and this can never be predicted – but embedded within all life are aspects of the species that came before, a sequence of connection that goes back even to the single-celled organisms that for two thirds of the history of our planet were the only life to be found on our planet.

Next Week: Myth #2: Only the Strong Survive

A chain stretching into the past - doesn't that seem at all like an inverted ladder to you?

I would prefer to think of evolution by analogy with a coral, or a fractal subject to entropy.

I like the coral because its parts are very subject to its environment...but I don't think new coral stems change from their 'parents', do they? So you have to imagine the change in the end parts...

zenBen: "A chain stretching into the past - doesn't that seem at all like an inverted ladder to you?"

I've never encountered a ladder that could be used to descend but not ascend. :) The problem with the ladder icon is that it encourages you to project into the future - which you can't do. There's no problem projecting into the past (although as Gould criticises, it misrepresents by being narrow in focus!), but the ladder isn't the best icon to capture this idea.

I can see the appeal of the coral icon, but it doesn't capture the idea Gould is trying to get at with his "mown grass" icon. And yes, coral itself is pretty self-similar. The fractal has the same problem.

Of course, Gould's icons purposefully focus upon the idea of "extinction by lottery" because it's part of his key idea - punctuated equilibrium. He wants to emphasise that most stems (most evolutionary pathways) end - permanently.