Religion in Science Fiction (3): Dune
Do You Enjoy Fear? (ihobo) 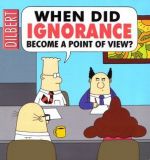 Why are large organisations so lacking in intelligence? On the surface, it would seem that having the minds of many individuals working together would produce a smarter super-organism, but in practice the reverse is almost invariably the case. The problem might be that neither hierarchical nor democratic command structures are effective at pooling knowledge and experience.

Imagine that each individual's knowledge, skills and experience could be shown as a cone of sight marking out a particular angle of a circle. Those with great proficiency mark out wide cones, inexperienced novices mark out narrow cones. (No-one, I suggest, would see more than, say, 180 degrees, since we all have our blind spots, and these are generally far bigger than it feels from our own perspective). Now consider the effect of hierarchy and democracy in terms of combining these cones.

A democratically organised team must win approval from all members. Thus instead of being able to combine all of its cones into one giant near-circle, the resulting cone tends towards the intersection of the other cones – the more people whose approval must be won, the narrower the cone. Together we are dumber than we are individually in this model of organisation. (No wonder that game developers that run on democratic principles rarely manage anything more than first person shooters, by far the simplest commonly deployed design template for a videogame). Add to this the likelihood that members on any given team are quite similar in their knowledge and experience and the problem can be further exacerbated.

Hierarchy compounds the problem: if approval must be won by people higher up a chain of command then even if the individual teams can pool their knowledge and experience successfully, the degree of competence that can be transferred is limited by the cones of those higher up. We're only as dumb as the stupidest link in the chain. (This is why bad management or intractable marketing can scupper the most promising proposal, although bad communication is another culprit in this regard). Combine this with the problem of the democratic team and it's a wonder anything worthwhile is ever achieved.

Instead of democracy, teams might consider alternative principles such as sociocratic consent, whereby rather than seeking the approval of everyone the process permits all reasonable objections to be considered. You can raise a complaint, which the team must discuss and address, but if you cannot coherently object your consent is tacitly assumed. By pooling potential problems, instead of attempting to intersect judgement, the resulting imaginary cone can potentially be made larger, rather than smaller.

Instead of hierarchical control whereby each successive step up the chain has greater power and influence (limiting success to the competence of those most remote from any given project), executive objections can be used to guide the process. Thus the marketing department (for instance) can raise its reasonable concerns as problems, but may not propose its own solutions. (Some kind of appeal process can further improve this approach).

Ivan Illich argued that many of the problems of our societies are rooted in the hierarchical structures of our schooling system, which prepares everyone to operate in similar structures in their professional lives. Against this, the communication potential of the internet offers us powerful new ways to organise ourselves, to flatten hierarchies, and to pool knowledge effectively. We are still a long way shy of fully utilising this potential.

Our companies and our nations are both hampered by collective ignorance. Breaking free requires new ways of thinking about how we co-operate.

The opening image is the cover to the book When Did Ignorance Become a Point of View?, by Scott Adams. As ever, no copyright infringement is intended and I will take the image down if asked.

... ya know, this might just explain exactly what it is that bugs me about representative democracy as a system of government. or at least, one of the big things.

problem is, while sociocratic consent looks like [from what you wrote there, i have no other knowledge of it] it would work on a small scale [so does democracy. and communism, for that matter] it looks like it'd run into problems scaling up. at least to the point of national government where such ideals as [the illusion of] democracy are highly prized. or, for that matter, any system where those at the top were less than ideal.

i can totally see it working for companies and things though.

mmm... pretty sure this was Supposed to be meaningful. maybe it is. feels like I'm just rambling though :D

Yeah if we're looking for intelligence, effectiveness and efficiency, then the best way to go is probably some hybrid of a free market approach led by a benevolent dictator that has the authority to do the things that the collective can't.

But personally I've never considered the point of democracy to be about those things.

The way I see it, the most important reason to have any kind of governing body is to ensure the humans rights and freedoms of its people, and ideally all peoples.

Democracy, then, can be seen as simply one of the better mechanisms we've come up with to deal with the possibility that a leader may disrespect those rights; just vote the jerk out. The usual alternative is to wage a bloody revolution.

Frankly that's the only real reason to have a democracy... as long as you have that you can choose your leaders and make your decisions based on the flip of a coin for all I care.

Collective intelligence works best in small groups that have considerable autonomy. Most organisations have been bitten by the problem that some autonomous teams have (or are perceived to have) highly visible and damaging failures, and rein in the autonomy for all - consider England and Wales, where the centralisation of power in government is far greater than it was a generation ago. This damages all tems within the organisation - whether to a greater extent than the scope of the failures is open to discussion, I think!

Chargone: "problem is, while sociocratic consent looks like it would work on a small scale it looks like it'd run into problems scaling up. at least to the point of national government"

I agree! I was principally writing about organisations with a single clear focus, which government arguably is not. The problems of government are more complicated since a nation's highest authority must deal with issues on at least three scales: local, national and international. Part of my wonders if we wouldn't do well to split these roles up anyway...

mad: "Democracy, then, can be seen as simply one of the better mechanisms we've come up with to deal with the possibility that a leader may disrespect those rights; just vote the jerk out. The usual alternative is to wage a bloody revolution."

Yes, I agree this sentiment. But it gets complicated, doesn't it, because as a result of this mechanism our democratic leaders often end up expending more effort remaining *popular* than being *useful*. :)

"Frankly that's the only real reason to have a democracy... as long as you have that you can choose your leaders and make your decisions based on the flip of a coin for all I care."

I have often said I would be happy with politicians being selected at random - an aleaocracy, if you will. As long as you can ditch the ones who don't work, it might be more efficient than elections. :p

Yes, absolutely. But empowering that autonomy is very difficult in the large organisations - the bigger the group, the harder it becomes. But I believe that by flattening hierarchies (which is possible with modern communication technology) we can acheive greater empowerment of the individual teams.

Thanks for the comments everyone!

Do YOU want to be president of the United States? Just send in 3 UPC's from specially marked boxes of Kelloggs brand (TM) Corn Flakes in a Self Adressed stamped envelope for your chance to win! You can make big decisions like: whether everyone will have free beer!

Random selection may be the only fair way to get people who don't want power to lead AKA the best kind of leader...

just Scott: it sounds crazier than it is!

In the UK, the House of Lords (the equivalent of the Senate in the US) was until recently occupied by people who had inherited their position ancestrally. So in fact, the people who sat in the Lords *were* there "at random" - a lottery of birth. Yet, the House of Lords works fine as an upper house - at least, if you compare it to other upper houses like the Senate (i.e. it is no worse).

Obviously if you compare political reality to idealised visions of politics it will always fall short!

The civil service in any nation actually provides the continuity of service, and implements all policy - the politicians are actually just figureheads. Watch the British comedy "Yes, Minister" for the full joy of this! :)

chill: Nice to hear from you! Although my romantic inclinations want to agree with you, I'm not sure at random you would chance upon leadership material.

But in terms of something like an upper house, which decides whether a law is good enough to proceed, I don't see why this *can't* be done by a random selection of people! :)

I don't know what the best way to source good leaders would be...

I don't understand how there is any difference between seeking the approval of others or, instead, waiting for objections. In seeking for approval, the only way disapproval is shown is through objections -- that are hopefully reasonable. Maybe I'm just being dumb...it's the morning here.

Adam: It seems you are assuming that "the only way disapproval is shown is through objections".

My experience of democratic organisation is that one does not have to raise a coherent objection to block a democratic decision - one need only feel strongly against it. The requirement to voice a specific objection, and have it be reasonably considered, is radically different from (say) a "show of hands" determining whether a particular course of action proceeds.