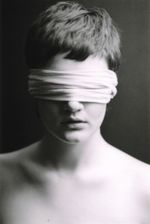 As you push open the door to leave a building, a man shouts obscenities at you. What a rude man, you think. But unbeknownst to you, when you flung open the door you hit the man in the face. You interpreted the event in terms of the man's personality traits (he's rude), and ignored the situation which caused him to behave this way (you hit him in the face with a door). You've fallen prey to circumstantial blindness.

In psychology, this phenomena is known as the fundamental attribution error (or correspondence bias). These terms refer to the tendency to presume that a particular situation is best explained by the (internal) personality traits of the people involved, not the (external) circumstances surrounding those people. In other words, when we observe an event we tend to process it in terms of what it tells us about the people involved, and underestimate the importance of the context within which the event occurred.

In 1967, Edward Jones and Victor Harris ran an experiment in which subjects were asked to assess a person's attitude towards Fidel Castro based on an essay they had written. In one of the studies, the subjects were told that a coin had been tossed to determine whether the writer would pen a pro-Castro essay, or an anti-Castro essay – that is, the essays did not represent the attitudes of their writers, and the presented attitudes had been assigned at random. Despite being told this, the subjects consistently assigned pro-Castro sentiments to the authors of essays that expressed a positive view of Castro and vice versa. Even being told that circumstances were the root cause of what was written, people still linked their impression of the text directly to the attitude of its writer.

Jones & Harris used the term correspondence bias to represent this discovery, and the experiment caused Jones to observe:

I have a candidate for the most robust and repeatable finding in social psychology: the tendency to see behaviour as caused by a stable personal disposition of the actor when it can be just as easily explained as a natural response to more than adequate situational pressures.

This work was later pursued by Lee Ross and his team in the 1970s, who first coined the rather clunky term fundamental attribution error (or FAE) for the phenomena. A simpler way to understand the concept is with the phrase it's not you, it's here, or to put it another way: people are 'victims of circumstances' more often than we think.

Consider one of Ross' most striking experiments. Subjects observed two sets of basketball players shooting hoops indoors, but were not told that while one of the two groups was playing, the lighting in the gym had been lowered. Needless to say, the players in low lighting conditions did not play as well as those in the well-lit gym. Nonetheless, the subjects consistently attributed the poor performance to the player's lack of skill, not to the lighting conditions in the gym.

In another experiment, subjects were placed into pairs and randomly assigned the role of questioner and answerer for a general knowledge quiz. During a preparation interval, both subjects created a set of difficult questions on whatever subject they choose, then during the test the questioner asked their questions to the answerer. Afterwards, they were asked to rate each other on a number of different traits. Everyone involved knew the circumstances behind the test, but nonetheless they consistently tended to rate the questioner as having better general knowledge skills, despite the fact that they had chosen questions from their own areas of expertise.

At least, we do when we're dealing with other people. It seems that while we are too quick to explain the behaviour of other people in terms of their nature, we naturally tend to explain (or perhaps, excuse) our own actions in terms of the situation. Jones and Nisbett call this the actor-observer bias, or to put it another way: if you do it, it's your fault; if I do it, I'm a victim of circumstances.

So is correspondence bias another bug in the human operating system, like cognitive dissonance? Well, yes and no. Research by J.G. Miller has revealed that this effect varies according to culture, so it is not part of the underlying wetware (like cognitive dissonance), but rather something we learn. In Western, individualistic societies the tendency to circumstantial blindness is quite pronounced. Yet in Eastern, collectivist societies the reverse tendency has been demonstrated – explanations in terms of situation are often preferred to those in terms of personal traits.

Although these psychological phenomena are well documented, and even quite widely distributed (the popular book The Tipping Point, by Malcolm Gladwell, discusses the fundamental attribution error, for instance) we are a long way short of fully appreciating their implications. If we tend to turn to explanations in terms of personality too easily, what does this mean for our societies?

One particular consequence of note has been explored by Donald Dripps in the context of criminal justice: because of circumstantial blindness, we are frequently too certain in our application of blame. In his paper, Fundamental Retribution Error: Criminal Justice and the Social Psychology of Blame, he suggests:

In the actual practice of criminal justice, we frequently give legal force to intuitive judgements of personal responsibility, and this practice is approved by many strands of both popular theory and prevailing practice. But our intuitions about blame are not to be trusted. What criminal law reformers can learn from the research on FAE—and it may be all we can learn from it—is that we should reach judgements of blame with as much humility as possible.

We learn to trust our judgements, because to doubt them constantly is the path to insecurity and madness. Yet in the case of other people's behaviour, we would do well to remember that the context within which events unfold are like a secret actor, working unseen from behind the scenes, but with as much a part to play in what occurs as the people themselves.

This one makes me further certain of the need to have at least some idea of the circumstances when modelling the player - be they in the game, around the player, or in the player (in other words each measurement technique should be integrated with as many others as possible).

zenBen: Of course, it's very difficult to get a complete picture of circumstances. Rather than attempt to overcome this barrier, I prefer to recognise that all player models are approximate and indicative, and should not be taken as evidence of a "deeper objective reality".

How widely applicable this is is quite frightening really. I'd just been writing about competitive video games as spectator sports and one of the problems is the trouble casual viewers have with the "but I can do all of that - it's easy!" attitude - which also stems partly from this bias, completely & conveniently forgetting the circumstances & pressures of a tournament setting, for example, that the players are under.

Rik: absolutely... people are just terrible at taking these sort of factors into account! :)