The Joy of Swik 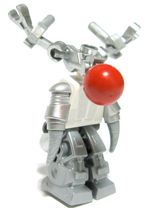 Among the many Winter Festivals that are practised, none is stranger than the Discordian festival of Swik, pronounced 'swik' or 'christmas' – although not to be confused with the Christian festival with the same pronunciation and dates. An ancient Discordian tradition, dating back at least twenty years, states “the joy of Swik is Getting, Shouting, and Passing out”, but it is widely recognised that Swik is a festival to be endured rather than enjoyed (much like a Klingon rite of passage). One does not have to be a Discordian to be participating in Swik... most people are simply trapped in the festival through no fault of their own.

No-one is really sure when Swik piggybacked onto Christmas, although it happened a long time after Christmas piggybacked onto the Pagan Solstice celebrations, which also fall at this time each year. Perhaps it was the Victorians who began to ignore the religious aspect of Christmas and focus instead upon the sale and purchase of an unnecessary profusion of gifts, which has now escalated to such a violent spectacle of intense consumerism as to make the shops utterly impassible to anyone not comfortable with someone's elbow stuck in their nose. Fortunately, Swik also brings with it a spirit of alcoholism and debauchery which salves the pain of the shopping horrors, not to mention the discomfort of strained family unity that many must find a way to survive.

In recent years, Discordians in the United States have also began to use “swik” to refer to unwanted presents, and thus divvy up their swik (or loot) to interested parties in the aftermath of festivities. This builds upon the long standing tradition of Discordians giving the tackiest most unbearably awful plastic frippery as presents to one another for Swik. The Japanese produce the most incredible tat for Swik each year, and one has not lived until one has hung some bizarre talking plastic ornaments on the Swik tree.

To all those doomed to endure Swik, I wish you godspeed or, as the Klingons put it, K'plah! To everyone else, according to your traditions, Happy Kwanzaa, God be with you followers of Bahá'u'lláh, felicitations on the birth of the tenth Nanak, Happy Islamic New Year 1431 AH, Merry Christmas, Serene Buddhist New Year, Happy Hannukah, Merry Yalda, Auspicious Makara Sankranti and last but not least, Happy Solstice and rejoice for the Sun King has returned!

Only a Game will return in January.