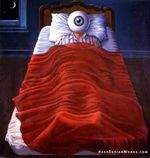 Can we consider some kinds of insomnia as forms of withdrawal, relating to the mental activities the insomniac has engaged in?

I have struggled with insomnia on and off throughout my life, and over the years (and with the assistance of my wife) have taken steps to improve my chances of getting a good night's sleep. The most effective protection against insomnia in general has been to get up at the same time every day; routine is a strong defence against all manner of mental troubles. Also important has been stopping playing videogames, working on philosophy or composing prose text within the two hours or so before going to bed. It is in the context of this that I believe insomnia might be intelligible as withdrawal.

The prefrontal cortex of the brain is the site of most executive function, and where decisions are made. The cruchiest of decisions – those with a strong mathematical, or logically calculable element – are made in the orbito-frontal cortex (which I have dubbed the decision centre, although in fact other neighbouring parts of the prefrontal cortex are used in some kinds of deciding). This part of the brain is directly linked to the pleasure centre (nucleus accumbens) – we are wired to find making good decisions rewarding. The chemical messenger in this reward process is dopamine, and this is associated with habit formation and all addictive behaviours.

My suggestion in respect of insomnia (or at least, the kind of insomnia I suffer from) is that it results from the decision centre's relationship with the pleasure centre. When we are working on a puzzle, problem or decision, the pleasure centre will provide dopamine in two general cases: when we find a solution, and when we anticipate reaching a solution. I previously discussed this in the context of videogames as Grip – that which keeps you going back for “one more go”. A really deep problem is compelling to those of us who have well- (or over-) exercised decision centres e.g. lovers of hobby games and strategy games, analytic philosophers, programmers etc. The fixation on a problem may be tied to Grip – the anticipation of future reward, which in itself delivers dopamine.

Thus insomnia as withdrawal postulates that when we go to bed with an active decision centre, we fail to get to sleep because our decision centre craves more of the dopamine, which compels it to keep chewing over the issues in question (in pursuit of its reward). In some cases – such as philosophical problems – there may be no final solution to pay off the big reward (fiero), and the anticipation of reward may be all that can be expected. This may have contributed to Wittgenstein's tortured nights, during which his mentor Bertrand Russell tried to lend support as best he could.

This would also explain why, when possessed of a particular problem, I wake up in the middle of the night and can't get back to sleep: my brain completes a sleep cycle (approximately three hours, including REM state dreaming), then the decision centre – hungry for a hit from the reward centre – demands attention. It is in withdrawal. Similarly, a friend of mind asked that we might ease down on the crunchy, calculable hobby games such as Power Grid because he found himself waking in the middle of the night thinking about problems of the kind the game presents, and this seems to tally with my account here.

If this idea holds, the most effective defence against insomnia of this kind may be to engage in more passive pleasures before sleep e.g. undemanding fiction, mindless television, a pleasing hot drink. (However, note that fiction can be an involving, rewarding process – our minds are often highly active implying fictional truths from what little is actually stated in a work of quality fiction in any medium, and even trashy novels can be addictive – perhaps especially so). Meditation, with its focus on “quieting the mind” (and in this, silencing the demands of the decision centre) would also be effective.

Of course, gamers may often escape insomnia as withdrawal by simply continuing to play the games they were playing deep into the night – this is insomnia as addiction, which I certainly had when I was playing Pokémon Red many years hence, and have also had with certain books that simply demanded continued attention. The fact that there is an equivalent case of addiction that parallels my description above suggests to me that this concept of insomnia as withdrawal has some merit.

The opening image is by Richard Hess, which I found here at HessDesignWorks. As ever, no copyright infringement is intended by the display of this image, and I will take it down if asked.

I could probably appreciate this better if I'd had more than one 3-hour block of sleep last night, between waking up to think about programming problems and about Europa Universalis III.

I can sympathise thoroughly with this post. I am blighted by insomnia and like many things it is something that affects me in varying degrees over the years. Presently I think it has been improving compared to the past two weeks, but some more improvement is needed.

I can't say I've worked out a good method of trying to deal with it but I acknowledge that there are wider lifestyle factors around it. If you really busy yourself during the day with important executive decisions you can tire yourself out naturally; on the other hand if you are 'too' involved in your work you can stay up and push yourself into insomnia.

I try (and sometimes fail) to keep an excercise routine to keep my energy levels and metabolism up. This, I find helps me become less inclined to sleep late in the morning. Alcohol is another no-no in terms of hindering a sleep routine. I don't know if alcohol assists sleep (as some people often say); but it certainly doesn't help you wake up!

Sleep is so much a part of a wider system of how we organise ourselves that insomnia may be symptomatic of a wider picture. Kant's views on sleep were quite interesting. Kant believed that we should not stay in bed too long because sleep depletes the amount of conscious time alive (he thought this as a pseudo-scientific fact). Kant's attitude, therefore, was to enjoy as much wake time as possible so as to live a longer life.

Excepting for the pseudoscience aspect of Kant, I think he's got a point. This winter I've been too inclined to hibernate and I should get busy living instead.

My personal 'tricks' are:

i. Podcasts
ii. Audiobooks
iii. Last.fm comedy (I've heard most of the comedy on the playlists already so it's more of a passive comfort than an active listening activity)
iv. complete silence (sometimes the contrast of silence in my otherwise sonically full day is enough to prompt me to sleep - knowing when to lay off all the technology)

On the gaming topic I remember when I used to be engaged in a really immersive game that my thoughts would be in the frame of the game and its GUI after I'd stop playing. I'm obsessive and addictive like that, as such, I avoid games esp. before sleep.

To reiterate a previous point. The battle with insomnia is a constant one over the course of life and it is also a learning (and re-learning) experience.

That makes a hell of a lot of sense. I've had similar problems--I'm an analytical person and I find myself always thinking as I try to fall asleep.

It doesn't even have to be a rewarding problem that you're trying to solve--because this sort of behaviour is common with depression and anxiety disorders, too. The brain gets stuck in a loop of worry, maybe searching for that dopamine kick, never finding it, and grinding itself to pieces in the process.

My ability to fall asleep is strongly correlated (though with a delay) to the amount of meditation I've been doing. When I'm practicing well, I can effortlessly shut my mind off, find my breathing, and go to sleep. When I'm not, I have serious trouble letting go of an idea when I hit the sack.

Thanks for the comments everyone! I have nothing much to add, but it's really interesting to read other people's perspectives on insomnia.