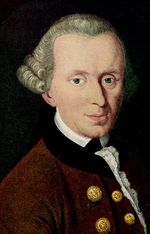 When we have an aesthetic response to, say, a work of art, is that experience wholly subjective, or can there be an objective element in aesthetics? This question is the focus of the first part of Immanuel Kant’s Critique of Judgement, first published in 1790, in which he explores the aesthetical judgement in terms of his labyrinthine system of transcendental idealism.

Dealing with Kant’s approach to any given topic requires either that one learns his near-incomprehensible framework of terms, or that one translates those terms into more readily understandable language. Since my goal here is to elucidate Kant’s meaning, I have chosen the latter approach – in the full knowledge that by moving away from Kantian terminology I open myself up to radical disputes about my conclusions. Nonetheless, since my hope is to present Kant’s ideas for an audience who are not necessarily philosophers, the only viable choice is a simplification of Kant’s system.

Vital to Kant’s intellectual project in his critiques is the concept of synthetic a priori judgements, a phrase that enjoys the usual impenetrability associated with Kant’s work as a philosopher. The thrust of his ideas in this regard are easier to understand than the phrase itself is to explicate: how can we know anything? David Hume, in his classic 1739 polemic A Treatise of Human Nature, had delivered a scathing blow to various assumptions that had previously gone unchallenged, claiming that even basic principles such as causality were suspect and could not be derived from sense experience alone – that we experience one event regularly following another does not actually allow us to conclude that the earlier event caused the later event. Consider that on most TV channels we witness advertisements proceeding the programme we are about to watch – but we would be gravely in error to assume that advertisements caused TV programs. Confluence need not imply causality.

Kant was hugely inspired by Hume’s work, saying that it “woke him from his dogmatic slumber”, which is to say that Hume’s work was a slap in Kant’s philosophical face, and encouraged him to find a way to overcome the Scotsman’s sceptical challenges. Hume had rejected all metaphysics (i.e. untestable knowledge) as “sophistry”, and had been far from entirely convinced that even non-metaphysical knowledge could be trusted. This rejection of traditional metaphysics was tied up in part with Hume’s rejection of Christianity (although he was not an atheist so much as irreligious). Kant, on the other hand, was an ardent Christian and like Galileo before him, did not “feel obliged to believe that the same God who has endowed us with sense, reason, and intellect has intended us to forgo their use.” In pursuing philosophy, Kant seems to have felt he was doing God’s work, even (or indeed especially) when in so doing he overturned the dogma of the Church of his day, which he saw as a “counterfeit service to God”.

But overturning Hume’s conclusions was no easy matter. It could not be done in any manner that relied on empirical knowledge, because it was precisely this that Hume had brought into doubt. It required an attempt to find some solid foundation beyond the empirical. Kant rejected what is termed analytic reasoning since this could only deliver conclusions which were, in essence, already self-evident – the analytic proposition that a triangle has three sides, for instance, is entirely self-contained. Kant felt it was necessary to find a synthetic solution – one that reached beyond the neatness of analytic thinking – and this created a significant problem, for it is was far from clear that one can have synthetic knowledge without it being based on empirical observation. If I tell you that swans are white that is an example of synthetic knowledge, but I can only have acquired that knowledge from observing swans empirically. I cannot have synthetic a priori knowledge of swans. Is there anything outside of mathematics about which we can have such knowledge? This was the challenge Kant pursued in his first critique as he set off to try to uncover what he termed transcendental principles, by which he meant foundational conditions without which we could not form thoughts and opinions about anything.

The important foundation that the Critique of Judgement inherits from the first critique is simply this: how we understand things depends upon a cognitive faculty which Kant calls judgement (hence the title of the book), and the usual action of this faculty is in respect of specific concepts. Kant distinguishes between determinative and reflective judgement, and this can be understood (as Clive Cazeaux observes) as equivalent to the distinction between knowledge and art. Thus the determinative judgement interprets a particular intuition under a concept, determining that something is such-and-such a thing – that the round, red object we perceive is a tomato, for instance. All knowledge depends in some way upon this sort of ability to assign properties to objects. But the reflective judgement – which we use in appreciating art – does not use empirically determined concepts. Kant puts it as follows in his introduction to the Critique of Judgement:

…the subjective [element] in a representation… is the pleasure or pain which is bound up with it; …not only for the subject which apprehends this form, but for every judging being in general. The object is then called beautiful; and the faculty of judging by means of such a pleasure... is called Taste.

Kant’s “judgement of Taste”, therefore, does not work in respect of concepts (as does the determinative judgement i.e. judgements of knowledge) but depends instead upon sensations of pleasure or pain. And this is a strange thing to encounter, since:

The question to be explored, therefore, is how it can be possible for anyone to call something beautiful and trust that other people will accord with this conclusion. How can Kant’s “aesthetical Judgement” provide “a special faculty for judging of things according to a rule, but not according to concepts…”?

Next week: The Beautiful

Why is it that you have time to post entire new posts, but don't have time to respond to any of the questions about your reality hierarchy?

Mory: you make the mistake of assuming that because a post appears, I have been blogging. I have actually only had time to do blog-work once this week prior to today!

TypePad allows me to queue up posts in advance, and that's what happened this week - all of the posts were set up on Monday; they just went live at the time I had set for them, giving the illusion that I had been blogging. (If you could see the time stamps for the posts, you would see they come out at the exactly the same time every day which might have tipped you off to the automation!)

Sorry to leave you hanging! I've been terribly busy...

Interesting stuff. I look forward to hearing about beauty.

"– but we would be gravely in error to assume that advertisements caused TV programs."

I thought that was the whole idea behind commercial TV stations.

Nick: "I thought that was the whole idea behind commercial TV stations."

Sure, but TV programs do not require advertisements - in the UK, for instance, there are stations like the BBC which have none (except for future shows coming up), and even in the US there are paid stations which show TV shows but do not have adverts.

This is why I am suggesting it is a mistake to suggest that advertisements cause TV shows (even though in some situations, there is something akin to a causal relationship working behind the scenes).