Kant on Aesthetics (3): Nature versus Art 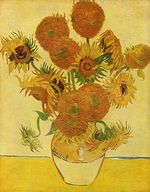 Thus far it seems as if there is no place for art in Kant’s conception of beauty – free beauty in Kant’s terms seems to be inherently restricted to being a property of nature. However, Kant in no way denies the possibility or existence of beautiful art (by which is meant art with a free beauty, since obviously any art could have the purely subjective attractiveness implied by Kant’s dependent beauty). That art has not made a significant appearance in Kant’s account indicates not the impossibility of beautiful art, but the necessity of a relationship between art and nature in order for the subjectively universal experience of beauty to apply to it.

Beauty, however, is not the only “subjective universality” that Kant explores; he also considers the concept of the Sublime, noting that this has in one thing in common with the Beautiful: “both please in themselves”. However, what Kant considers Sublime are those things which are boundless or absolutely great – so much so, in fact, that it can be a source of terror, albeit not a fear seriously experienced since “it is impossible to find satisfaction in a terror that is seriously felt.” Thus he writes:

Bold, overhanging, and as it were threatening, rocks; clouds piled up in the sky, moving with lightning flashes and thunder peals; volcanoes in all their violence of destruction; hurricanes with their track of devastation; the boundless ocean in a state of tumult; the lofty waterfall of a mighty river, and such like; these [make us feel] insignificantly small in comparison with their might. But the sight of them is the more attractive, the more fearful it is, provided only that we are in security; and we readily call these objects sublime, because they raise the energies of the soul above their accustomed height, and discover in us a faculty of resistance of a quite different kind, which gives us courage to measure ourselves against the apparent almightiness of nature.

Once again, the sublime (as apparently with the beautiful) seems to be constrained such that it is found solely in nature. Kant writes: “Nature is therefore sublime in those of its phenomena, whose intuition brings with it the Idea of their infinity,” which reinforces this impression. However, this digression in respect of the Sublime serves to emphasise what is for Kant a key point in regard of aesthetics, namely that – just as with the Beautiful – there is a necessity ascribed to the judgement of the Sublime:

For just as we charge with want of taste the man who is indifferent when passing judgement upon an object of nature that we regard as beautiful; so we say of him who remains unmoved in the presence of that which we judge to be sublime, he has no feeling.

It may seem as if Kant has overstepped his mark by requiring that people ought to experience beauty or sublimity in the presence of certain things, but he is not oblivious of the strange situation he proposes:

This problem then may be thus represented: how is a judgement possible, in which merely from our own feeling of pleasure in an object, independently of its concept, we judge that this pleasure attaches to the representation of the same Object in every other subject, and that a priori without waiting for the accordance of others?

Kant’s claim is that when we assess something to be beautiful or sublime these judgements imply the “required assent of everyone” and that this is either a priori (independent of experience) or at the very least there is a “desire to be regarded as such”. This dovetails with the general problem that Kant is pursuing in his transcendental idealism: how is it possible for us to make a priori judgements in cases where those judgements don’t proceed logically from the terms being considered?

In the case of aesthetics, Kant appeals to nature as the architect of the universal satisfaction to be found in free beauty.

This thought then must accompany our intuition and reflection on beauty, viz. that nature has produced it; and on this alone is based the immediate interest that we take in it… It must be Nature or be regarded as Nature, if we are to take an immediate interest in the Beautiful as such; and still more is this the case if we can require that others should take an interest in it too.

So does Kant’s conception of aesthetics have nothing to offer about art, then? Is all art to Kant merely dependent beauty? No, Kant finally links the two ideas together:

Nature is beautiful because it looks like Art; and Art can only be called beautiful if we are conscious of it as Art while yet it looks like Nature. For whether we are dealing with natural or with artificial beauty we can say generally: That is beautiful which pleases in the mere act of judging it (not in the sensation of it, or by means of a concept).

He furthermore claims that just as taste is required for judging beautiful objects, so genius is required for the production of beautiful things –that an artist who creates a thing of beauty is necessarily a genius of some kind. For Kant, who usually seems to take pleasure only in his abstract intellectualism, this is a considerable concession! Even more astonishing is Kant’s brief digression into the joys of games (specifically games of chance), which he views as a form of the play of sensations and thus related to both music and the art of colour:

How much gratification games must afford, without any necessity of placing at their basis an interested design, all our evening parties show; for hardly any of them can be carried on without a game. But the affections of hope, fear, joy, wrath, scorn, are put in play by them, alternating every moment; and they are so vivid that by them, as by a kind of internal motion, all the vital processes of the body seem to be promoted, as is shown by the mental vivacity excited by them, although nothing is gained or learnt thereby.

Far from being a Chess-head or strategy buff, as might be expected, Kant seems to find far more satisfaction in the diverse human emotions stirred up by Calliois’ alea than in the single-minded pursuit of victory involved in Caillois’ agon. Modern game designers, as intellectually divorced from everyday life as Kant himself sometimes seems, could learn much from Kant’s recognition of the merits of games of fortune, but as Kant says: “as the beautiful does not enter into games of chance, we will here set them aside.”

Beautiful art, then, is the parallel of the artistry of nature. When we see beauty in Nature, we find it thus precisely because it strikes us in the same way that we experience great art. And conversely, great art can achieve beauty only in so much as it has within it a sense of nature. This need not mean that only art that depicts nature can be beautiful, however, as for Kant the essence of this beauty is purposiveness without purpose, and this quality (he claims) is transcendental, it is the inescapable ground of all beauty which is not merely conditioned or dependent. What art cannot attain to, Kant seems to claim, is the Sublime, as this we can only experience in the unbounded power of nature.

Next week, Final part of the First Division: Taste