Squirrels Better Communicators Than You

Anthropocentric views have not disappeared, as is sometimes claimed, but remain embedded in the most innocent of statements. It may seem that prefacing "non-human"  to "animal" in the above sentence was unnecessary, but why? One of the shifts in worldview alleged to have been brought about by evolutionary perspectives was precisely the positioning of humanity in the wider context of life - the admission, in effect, that humans are animals. But a great many people do not think this way. They still see 'animal' as a category set apart from 'human'.

Blast from the Past

Last week, I was shocked to receive an email asking me the following:

I'm helping to update the RPG database at rpg.geekdo.com, and we were trying to confirm that you are the same Chris Bateman who was a contributor to the GamesMaster International magazine in England in the 1990's.  We're trying to see if your contributions to Discordia Inc. games should be an independent entry or combined with "your" entry.

I never mention my work for GamesMaster International to anyone, but this was in fact my first ever paid job - as a freelance writer for this magazine. Discordia Inc. was my first games company - a non-profit organisation publishing tabletop RPGs and boardgames, although we never quite managed to afford to publish any boardgames!

The RPG database at Geekdo.com is an offshoot of BoardGameGeek, and has only been running for six months. If, like me, you have a sordid past in tabletop role-playing games, I encourage you to stop by and check that your entries in the database are all present and correct.

Let us return to Kant’s strange claim that our judgement that something is beautiful involves an assessment of purposiveness in the absence of any tangible concept of purpose. He concludes the first part of the Critique of Judgement by exploring a “dialectic of the aesthetical judgement”, which is to say, by having a logical argument with himself about what kind of thing taste might be.

He begins by looking at everyday discussions of taste:

The first commonplace of taste is contained in the proposition, with which every tasteless person proposes to avoid blame: everyone has his own taste... the determining ground of this judgement is merely subjective (gratification or grief), and that the judgement has no right to the necessary assent of others... The second commonplace invoked even by those who admit for judgements of taste the right to speak with validity for everyone is: there is no disputing about taste.

For Kant, these claims constitute an argument about whether or not “the judgement of taste is based upon concepts” – if it isn't, there can be no controversy (i.e. “everyone has his own taste”), but if it is based upon concepts then “we could not quarrel about it” and we can “claim for our judgement the necessary assent of others” (i.e. “there is no disputing about taste”). Exploring this, Kant concludes that the apparent contradiction will disappear if the concept involved is one for which “nothing can be known and proved” - if it is a kind of concept which is “undeterminable and useless for knowledge”. If taste depended upon such a concept, then it would be possible to make judgements that might have validity for everyone, because “its determining ground lies perhaps in the concept of that which may be regarded as the supersensible substrate of humanity.” If taste relates to something fundamental in our experience as human beings, the problems may disappear.

How does this resolve the conflict between “everyone has his own taste” and “there is no disputing about taste”? Kant claims in the former case that the assertion rests on there being no determinate concepts of taste; there is always a subjective element involved. In the latter case he claims that there is a concept involved, but it is indeterminate (it's part of the background conditions by which we experience existence) – and here the apparent contradiction vanishes, because the absence of a determinate concept is not antithetical to the presence of an indeterminate concept. He thus concludes:

It is absolutely impossible to give a definite objective principle of taste... for then the judgement would not be one of taste at all. The subjective principle, viz. the indefinite Idea of the supersensible in us, can only be put forward as the sole key to the puzzle of this faculty whose sources are hidden from us: it can be made no further intelligible.

What is this “supersensible Idea” that Kant uses to justify the claims to “subjective universality”? It is the idea of the “purposiveness of both Nature and Art as the unique principle of the aesthetical judgement.” He challenges in this regard whether we should treat this “purposiveness” as a matter of realism or idealism – is it part of reality, or part of our minds? Here Kant's philosophical investigation pursues a tack which might be difficult to appreciate from the way we now view the world, and it is important to remember he is writing from the late 18th century.

Flowers, blossoms, even the shapes of entire plants; the elegance of animal formations of all kinds, unneeded for their proper use, but, as it were, selected for our taste; especially the charming variety so satisfying to the eye and the harmonious arrangement of colours (in the pheasant, in shell-fish, in insects, even in the commonest flowers), which, as it only concerns the surface and not the figure of these creations... seems to be entirely designed for external inspection; these things give great weight to that mode of explanation which assumes actual purposes of nature for our aesthetical Judgement.

It's hard to imagine from our modern perspective even making such an assertion, but at the time he was writing this was not a difficult claim to make – it would not have seemed strange to suggest that beautiful things in nature might have been made beautiful for the benefit of mankind because of the prevailing theology at the time. The shell depicted above could be seen as made beautiful by God that we might enjoy its beauty. But the ease with which Kant's contemporaries might make such an assumption does not give the philosopher pause. He objects that “Reason [is] opposed to this assumption [because we must aim] to avoid as far as possible unnecessary multiplication of principles” and furthermore Kant recognises that nature relies upon “mechanical tendency” and that this alone can create forms that seem to have an aesthetic value.

He thus rejects the idea that the purposiveness of nature can be attributed to realism, because it this were the case – if beautiful things really were created for us to view them as beautiful – then taste would not function in a manner independent of experience; rather, if this were the case, “we must have learned from nature what we ought to find beautiful, and the aesthetical judgement would be subjected to empirical principles.” Rather than a subjective purposiveness, as Kant suggests, we would find instead objective purposiveness but of course it is “we who receive nature with favour, not nature which shows us favour.”

Kant further claims that it is only in the case of subjective purposiveness that there could be an a priori claim to validity for everyone – if everything was made for us to experience it as beautiful, we would simply be assessing our experiences of the world empirically; there would be no need for anything that transcends this. Therefore the claim to subjective universality that is recognisable in aesthetics (“there is no disputing about taste”) effectively disproves any claim that there is anything objectivity universal in aesthetics. From this conclusion, Kant moves on from the discussion of aesthetical judgement and into his critique of teleological judgement – which in modern terms we might call intelligent design.

Next week, First Part of the Second Division: Intelligent Design

Over on ihobo today, I pick apart some of the assumptions behind Jon Cogburn and Mark Silcox's philosophical investigation concerning the success of the Wii. (There's very little philosophy in my approach, however, as my issues relate to simple games industry errors; their philosophy is not so flawed). Here's an extract:

The authors are seriously in error when they claim that what is relevant about the kinaesthetic aspect of the Wii is greater realism; there is a fundamental mistake behind this assertion, which has already been thoroughly exposed by Edward Castronova, namely the assumption that the realism of depiction is the key factor in the appeal of videogames rather than (say) immersion (or, equivalently, to assume that greater realism necessarily implies greater immersion).

You can read the entire piece over on the ihobo site. 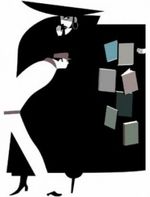 File sharing is often characterised as stealing, but this analogy is flawed. When a thief steals something, someone is deprived of it. When a pirate “steals” a file, they make it more available for greater numbers of people, not unavailable to the copyright holder. It would be fairer to compare file sharing to forgery, for this is the crime it most represents.

With this in mind, consider what would happen if a new device were available in your home that could photocopy any object perfectly (somewhat like the replicator in Star Trek). Clearly, this piece of equipment would thoroughly undermine the institution of cash: coins and paper money, now able to be forged by anyone, would immediately cease to be viable. A new approach to money would be required.

So it is with file sharing. The pirates are certainly complicit in crime, but focussing on this aspect of the situation is naïve. The problem is not that pirates duplicate files illegally, but that the business model of media as packaged goods is now irreparably compromised: like replicated money, a new approach is required. (I gestured at this same point previously, in comparing the file sharing situation to the effect of the advent of the telegraph on the Pony Express).

Perhaps the most viable new option is to switch from a goods model to a services model – media companies would gain revenue for providing media on demand in return for a subscription fee. (An alternative, per download fees, risks heavy invasion of privacy issues). Heavy-handed defences such as DRM are not strictly required for the service model to work, and may indeed be counter-productive to making money when one considers how much media revenue comes from cross licensing (e.g. using songs in advertisements or movie soundtracks; merchandising from TV and movies etc.). Getting a song in circulation adds value to a media corporation's portfolio of assets; the loss in fees implied in personal sharing may be negligible by comparison.

The greatest irony about this situation is that the pirates are already paying for their media on a subscription model. No-one gets internet service for free. Seen from this perspective, the problem is not one of crime prevention, but of broken revenue streams: internet service providers are not passing money onto media providers for the services they are brokering (for pirates). This simple fix could solve the problem in a stroke, but it will not be easy for giant multinational media corporations (who are on the defensive because they are haemorrhaging money) to negotiate fairly with the rather smaller ISPs. But as long as they don't, their leaky revenue model is to a significant degree their own responsibility.

The opening image is Piracy by Mike Cassel, which I found here. As ever, no copyright infringement is intended and I will take the image down if asked.