Once More Unto the Breach...
The Life and Times of Dungeons & Dragons (ihobo) 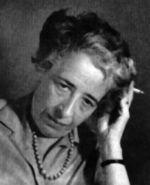 Hannah Arendt (pictured) blamed Plato for setting politics and philosophy in opposition. For although Plato advocated a "Philosopher King", this meant solely that the person in charge would have sufficient respect for philosophy to ensure that the philosophers could be left undisturbed in their deliberations. Plato did not, Arendt claims, envision philosophy as an active force in the common world of people and it was her belief that this was a deadly "blow dealt by philosophy to politics, the conviction that political activity is a necessary evil..."

She was troubled by the "inherent degradation" of the political realm, but even more so by "the radical separation" of the political realm, where people live and act together, from the concerns of people living in "singularity and solitude". This probably played into her decision to reject the title of philosopher for herself (despite it now being de rigeur to call her a philosopher), on the grounds that philosophy was concerned with "man in the singular".

She writes, in The Promise of Politics, a book edited by Jerome Kohn from her notes:

What matters is the unbridgeable abyss that opened and has never been closed, not between the so-called individual and the so-called community (which is a late and phony way of stating an authentic and ancient problem), but between being in solitude and living together... Neither the radical separation between politics and contemplation, between living together and living in solitude as two distinct modes of life, nor their hierarchical structure, was ever doubted after Plato had established both.

I find it particularly interesting that Arendt rejects the modern view of individual versus community as "phony" - since this is often how the liberal versus conservative political divide is couched. But Arendt saw this as a gloss over the division between solitude and living together. By focussing solely upon the self, the liberal mantra of individualism perhaps supports the right to live in solitude too fervently, and in so doing effectively deprecates working together politically. But the conservative focus on the  family and duty towards community may equally undermine our capacity to work together by restricting in rigid ways just who constitutes a part of any acknowledged community.

Too many of us have managed to inherit this disdain for politics that Arendt claims was handed down from Plato. The failure of modern philosophy to connect successfully with politics and reanimate political discussion (by which I do not mean the debates of politicians) may lie precisely with its liberal bias - it's commitment to the rights of the self and thus of solitude, and the denial of duties to those around us. Frankly, too many people - both liberal and conservative - are preoccupied by attempts to dictate how people in other communities must live. Against such a background, it is small wonder that local communities have become so gravely stunted in so many places - we would rather force our beliefs upon the world at large than have to talk to our neighbours.

If I were to consider my political views I would hardly refer to my philosophical background.

There seems to be a definite place for philosophers as vanguards (or at least a need for vanguards) in contemporary society. There need to be experts of authority in issues about public health, geoscience, agriculture and sustainability (among other things).

Philosophers have the stereotype of being overly concerned with old problems, which, in a sense is no bad thing (it makes good scholarship and continues the cultural and intellectual tradition that philosophy indulges itself in).

Where the social scientists and critical theorist kinds of people really succeed is in setting new agenda by their research titles, by engaging in immersion in the empirical realm. There ought to be more philosophy PhDs in politics; which would certainly help things (there are a few I add). However, I think in this day and age a variety of non-philosopher experts should take a part in current affairs, like:

Who sets the agenda? This is the really interesting question.

Aristotle addressed the Athenian political system up to his lifetime (or, as some scholars argue, a student who attributed Aristotle's name to the work). There was a proto-democratic state, but a non-democratic power was given to a body who decided what issues needed to be voted upon.

The issue is about who sets the agenda, not so much what it is. Certainly philosophers have distanced themselves from the political realm and political science as a whole. Whoever makes themselves the areopagites of this age has the power that goes beyond influencing people, they have the power of providing the people their options.

I should post more on your blog
Kind regards,
Michael

Michael: thanks for your thoughtful comment! It seems that you see a role for philosophy in politics in establishing the framework for discussions, and I think this certainly does happen to some degree.

One of the questions for me is whether or not it is viable to encourage the masses to engage in political thinking and discussion at all. And I'm unsure of the answer to this! Especially since tabloid newspapers and equivalent media outlets, which set themselves the task of connecting with the masses in their own language (and thus generating profit), arguably have a privileged position in influencing the political beliefs of the masses. (I apologise for buying into the idea that this term "the masses" has any tangible meaning!)

My concern with respect to philosophy is that it doesn't attempt to connect with the masses at all - indeed, some philosophers seem to have great disdain for everyday thinking. And this for me is epitomised by the idea of people wanting to enforce their will on the world but not being willing to talk to their neighbours.

There are bridges to be built but no-one seems interested in building them, perhaps believing instead that all one need do is uncover "the truth" and that will solve all problems. But absolute truth, if it is discoverable at all, cannot be a panacea for the kind of problems the world faces.

You are always welcome here!