Strindberg and the Quest for Sacred Theatre 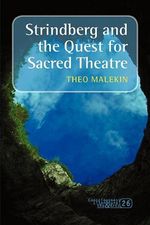 August Strindberg was one of the most influential figures in Scandinavian literature, and is considered to be a forerunner of (and major influence upon) modern theatre. In Strindberg and the Quest for Sacred Theatre, Theo Malekin dissects several of the playwright's final plays in the context of his reversion in 1896 to Christianity, having previously adopted an atheistic naturalism that dictated the tone and approach of his middle work. Malekin's enquiry revolves around the nature and content of Strindberg's metaphysical beliefs after returning to the Church – revealing an individual with views wildly disjunct from Christian orthodoxy at the end of the nineteenth century, wrestling honestly with the spiritual crises of his era.

I confess, prior to reading this book I had no awareness of Strindberg's work or life, and had the author not have been a long-time stalwart of this blog it's likely this book would never have come to my attention. This placed me in the uncomfortable position of reading a book concerning the details of a set of plays about which I had no prior experience to draw upon. Yet while my deficits in this regard were tangible, my lack of previous knowledge concerning the man and his work did nothing to blunt my enjoyment of the unravelling of the mysteries of his life and work, which are carefully and studiously exposited in an accessible and engaging style. The tenuous but tangible connections between Strindberg and the pioneering existential philosophers Nietzsche (to whom he briefly corresponded) and Kierkegaard (who influenced his early plays) also served to whet my appetite for Malekin's investigation, which might well appeal to anyone with an interest in theatre, philosophy or theology.

What fascinated me about Strindberg's story and beliefs are the inherent ambiguities, which in turn fed into a theatre that seems transposed between the symbols and practices of traditional Christianity and the Pandora's Box of uncertainty that broadsided conventional religion in the nineteenth century. The paradigmatic figure of the latter is Nietzsche, whose “death of God” is emblematic for the crisis – not connoting an inescapable atheism but rather a severing of the foundational conditions of belief such that we are all stranded amongst uncertainty. As Nietzsche puts this: “Is there still an up and a down? Aren't we straying as though through an infinite nothing?” Strindberg, facing up to this crisis of belief (from an entry point of naturalistic unbelief) entered what is termed his Inferno-crisis, which immediately preceded his (reluctant?) return to the Church.

Malekin describes Strindberg's situation as that of the “half-believer” – not a person who is indifferent or merely partly-committed to a religion, but rather the crisis of the devout in the face of the metaphysical uncertainties Nietzsche's philosophy (and the like) heralded for conventional systems of belief. The latter plays of Strindberg thus contain contradictory themes and situations, which are easily misunderstood if taken to be in strict opposition to conventional faith (as Strindberg's middle work appears to have been), and equally misrepresented if taken to be propping up religious orthodoxy. To Damascus (1898), for instance, appears to be built upon a template of redemption – of unregenerate descent followed by some kind of conversion and ultimate return to the bosom of the Church. Malekin rejects such a simplistic interpretation, pointing out the circular structure of the play and the ambivalence of the ultimate acceptance of Christianity by its protagonist in the conclusion. This is not the linear narrative of salvation that the nineteenth century Church was committed to, but a merry-go-round of half-belief that may have no end.

To Damascus also shows an intriguing attitude of ambiguity towards perception, something not previously explored in theatre. For instance, in an early act the protagonist encounters pallbearers dressed in brown, and asks why they are not wearing the traditional black. One responds: “To us in our foolishness, it's black, but if Your Grace commands, then it is brown for him.” Since the audience also sees these people dressed in brown the result is an inherent uncertainty as to whether what is seen can be trusted. The pallbearer's remark suggests he and his colleagues are indeed dressed in black – whatever the protagonist or the audience may perceive. Malekin draws out this theme in a number of Strindberg plays, and frames this in terms of a movement away from Aristotle's conception of theatre as mimetic and instead towards a kind of Platonic theatre – one in which the reliability of perceptions cannot be trusted, much like the dwellers' in Plato's cave who mistake shadows for reality.

Even more ambiguity and uncertainty can be found in A Dream Play, a piece which appears to have left theatrical directors in something of a quandary. Although the play's content is clearly intended to depict a dream, it is never clear whom the dreamer might be. Directors thus often select (or append) a character in order to provide this framework – a move which Malekin criticises as misrepresenting Strindberg's intentions. Inherent to the play, Malekin argues, is the absence of a denoted dreamer. Strindberg has drawn from religious ideas originating in Dharmic religions (such as Maya; the world as illusion) – an influence explicitly included by a framing narrative concerning the descent to the Earth of the daughter of Indra. In this light, the story might be best interpreted as a dream emerging in an identity-free cosmic mind. Malekin notes the incompatibility of this metaphysical view with the idea of a personal God, an aspect of Christianity Strindberg seems either unwilling or unable to accept in his post-Inferno half-belief, frequently fearing that such a personal deity could only be a tyrant.

Theologically, Strindberg seems unable to commit to anything approaching a typical Christian perspective of God – which leads to the inevitable question as to why in his later life he finds himself returning to the Church, and expressly identifying as Christian. Indeed, rather than the personal God of conventional Christianity, Strindberg seems to find an existential abyss lurking behind divine mystery. Malekin suggests this is not a denial of the divine (such as Nietzsche's project implied) but rather the end of any system of metaphysical certainty. The old beliefs face an apocalyptic termination, yet the unveiling of an infinite abyss lying beyond the world need not be (Strindberg seems to say) wholly negative. Why should the divine be emptied of its force by the discovery of its formlessness? What is denied by this uncovering are the easy answers of dogma, not the possibility of the sacred.

Furthermore, Strindberg's characters seem (especially in his Chamber Plays) trapped in a fallen world. Hell, in these intimate theatrical productions, can be found on Earth, and salvation is either tenuous or unobtainable. Yet this denial of Christian orthodoxy seems not to point away from the possibility of the sacred – rather, the plays seem to invite a discarding of illusions, not only of a personal God (of whom Strindberg could apparently conceive but perhaps could never accept), but of any conception of the world or belief in the self. Stripped of all such illusions, one may encounter the divine. It is a theme from the Dharmic religions that Strindberg imports into Christian symbols, a pathway of belief perhaps opened to him by his time as part of the Unitarian church prior to his atheistic years.

Ultimately, Malekin's exploration of Strindberg's later work reveals a paradoxical turn, underpinned by a confluence of pessimism and doubt that never quite seems to reconcile with his decision to return to Christianity. Just what Strindberg's faith might have consisted in at this time in his life is far from clear. Yet within his plays, one can find conflicting perspectives thrown against each other in a clash of beliefs that provide no easy answers, where no single interpretation can be adequate. This risks incoherence, but only in the same way life itself reflects a constant danger of unintelligibility. It is a theatre less concerned with ideology, and more interested in existential exploration.

Behind the action upon the stage lies – quite literally in A Dream Play – a yawning abyss, which may be the nihilistic negation of values foreshadowed by Nietzsche, but which yet might manifest as a divine groundlessness. It is in this latter possibility that Strindberg's plays may be seen as striving towards a new sacred theatre, one existentially divorced from the dogmatic certainties of the religious dramas that precede it. Yet Strindberg also seems to have been afraid of this, unwilling to cast off his ego into nothingness, even if to do so might be the only remaining path to the divine. Caught between doubt and faith, Strindberg's half-belief peeks behind the scenery of the world to find a vertiginous metaphysical chasm into which he was unwilling or unable to hurl himself. The liberation it might bring seems, in Malekin's view of Strindberg, as much a threat as a promise.