Mimesis as Make-Believe (7): Truth vs Fiction 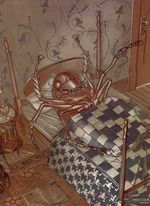 For the most part Walton is careful to avoid exploring questions concerning reality in the main body of Mimesis as Make-Believe, but in the final chapter he allow these ontological issues some careful consideration. Since the reader must grasp the core of Walton's theory in order to appreciate its wider implications, this is a prudent measure. Nonetheless, no philosopher writing a book can resist hinting at more than they can directly address, and early in the work Walton comments:

I suspect that make-believe may be crucially involved as well in certain religious practices, in the role of sports in our culture, in the institution of morality, in the postulation of “theoretical entities” in science, and in other areas in which issues of metaphysical “realism” are prominent, although I will offer only the barest hints or less of how my theory might be applied in these directions.

Furthermore, he finds it necessary to address at least in passing certain questions concerning the distinction between truth and fiction, whilst preferring to “remain neutral as to how truth and reality are to be understood”. He gives a passing nod to the work of Stanley Fish, however, and in particular the idea that “it is discourse itself which creates our 'reality',” a concept which clearly has some appeal to Walton. Neither Fish nor Walton deny that there are such things as facts, it is rather a case (as Fish writes) of “raising a question as to their status.” Fish suggests that what counts as “reality” is specified by whichever stories are “standard”, while non-standard stories are “non-authorised”. The connection with Walton's concept of an authorised game is apparent, whether or not one wishes the join the dots in this regard.

One should not think, however, that Walton wishes to dismiss the importance of questions of reality. He writes that “truth and reality, whatever they are, obviously do matter” making the comparison with the movie Dr. Strangelove, in which a nuclear war destroys the world, and stating: “We fervently hope that this will not turn out to be true. The difference is enormous and nothing could matter more.” At the same time, he is keen to observe that “not all cultures are as constantly preoccupied with truth and falsity as ours”, pointing to the relationship many Hindus have in respect of their epics the Mahabarata and Ramayana, such that for the most part there is no need to decide if these stories are true, or even to ask if they are. The insight and stimulation offered is independent of any claim to their veracity.

For his final subject in the book, Walton explores the ontological status of fictional entities, and bemoans the “voodoo metaphysics” that other philosophers have deployed in order to try and wiggle out of some of the problems posed by fiction. King Lear is an archetypal figure in this regard. As Walton says, “we all know that there is no King Lear, that Shakespeare’s play is mere fiction”,  but if we ask if there is such a character as King Lear, our instinct is to agree that this is so.

Walton's solution to problems of these kinds is to identify a specific kind of pretense, such that one pretends to describe the real world while actually describing a fictional one. Outing these kinds of construals allows us to distinguish ontological commitment (“reality”) from the pretense of referring to fictions, which become distorted in part because of the intense interest we often have in such pretenses. Walton suggests that many philosophical attempts to understand fictional entities fall down because of a failure to distinguish these two situations, quipping: “We are so deeply immersed in make-believe that it infects even theorising itself.”

In fact, this issue cuts both ways, since sometimes we pretend to talk about the real world as a means of talking about a fictional world, as when (say) a critic recounts fictional events as if they actually happened. A person saying “Tom Sawyer attended his own funeral” need not be prescribed to imagine there was a person named Tom Sawyer who attended his own funeral, even though someone listening may indeed be prescribed to do so. Thus: “Insofar as statements appearing to be about fictional entities are uttered in pretense, they introduce no metaphysical mysteries.”

Walton proposes the term ordinary statement to refer to claims uttered in pretense in connection with the authorised games of make-believe for a particular work. The above claim concerning Mark Twain's famous hero can be considered one such ordinary statement. Philosophers tie themselves into ontological knots when they mistake the acceptability or appropriateness of an ordinary statement for a claim to truth or falsity. We need not explore whether such assertions are true or false in assessing their acceptability with respect to the work world being alluded to – indeed, this seems to be the root of much confusion concerning the status of fictional entities. It is enough to say that assertions made of fiction are true provided it is fictional in the (authorised) games played with such fiction that the claim agrees with the fictional truths of that game.

Sometimes, we expressly betray the pretense involved in ordinary statements concerning fiction, usually in order to avoid the misunderstanding that would result were it not for explicit betrayal of the pretense. This is the role of phrases such as “in the story” or “in the world of the picture”. Beyond this we can go as far as to disavow what is pretended, that is, we declare that if one were to really assert in the manner pretended, one could not be asserting a truth. Such a disavowal can be found in statements such as “it is only in Kafka’s Metamorphosis that someone was transformed into an insect” (an event pictured above). This makes clear not only that no-one was actually transformed into an insect, but that nobody ever was transformed into an insect.

Practical examples of betrayal or disavowal can be construed as implying games of particular kinds. For instance, using one of Walton's examples, if we say “mythical beasts are not very dangerous,” the listener is intended to infer a game in which there are both “mythical” and “real” creatures – it is only via such a game that a claim of this nature can be reasonably considered. Why do we need such a game? Because there are no mythical beasts in the real world; mythical, as a property, implies non-existence. It can only be fictional that predicates such as “mythical” – or indeed “real” – come to express properties. (This is not a denial of reality; in Walton's perspective everything that can genuinely possess a logical property is by definition “real”, therefore in its role of distinguishing from “fake” or “illusory”, the term “real” must be construed as having meaning only in fiction).

This account connects with existence claims in general. How do we assess a statement such as “dragons do not exist”? By considering the fictional game the sentence produces when it is used as a prop, and seeing how it refers (or how we believe it refers) to the world we live in. Thus if one excludes the Komodo dragon, it is fictional that one speaks truly in saying “dragons do not exist”. And conversely, it is fictional that one speaks truly in uttering “Komodo dragons exist”. This may seem strange, since we would not normally mention fiction in our consideration of what seems like a perfectly normal existence claim. Yet in deploying Walton's make-believe theory such an approach becomes strangely natural. It is not that Komodo dragons are fictional in the real world, but rather that the attempt to assert their existence can be considered to do so via comparing the game of make-believe the previous sentence prescribes in its role as a prop to our understanding of the real world.

Walton thus suggests that this approach uncovers “an unexpected continuity between existence claims... and the predicative statements they resemble so closely”, both in the context of statements that genuinely attribute properties to whatever we consider actual, and those that appear to attribute such properties to fictitious things. Claims to existence, in Walton's view, can best be understood via our faculty of imagination, even though such claims need not directly involve pretense or make-believe in the case of entities that have nothing to do with works of fiction. How else are we to understand a concept like “exists” if not by comparison to its alternative, which can only be considered via fiction? (This point may become clearer if you consider the proposition “you do not exist”).

Regardless of what one makes of Walton's attempts to unravel the philosophical problems concerning fictional entities and existence claims that comprises the finale of Mimesis as Make-Believe, the make-believe theory of representation remains a comprehensive and satisfying system for understanding the institution of fiction. Wittgenstein wrote: “Don’t take it as a matter of course, but as a remarkable fact, that pictures and fictitious narratives give us pleasure, occupy our minds,” one of many quotes from Philosophical Investigations that Walton includes in his own work. In certain respects, this book picks up some of the tantalising strands left hanging in Wittgenstein's later work and fleshes them out with remarkable care and attention. One can only hope that future philosophers pay the same courtesy to the equally intriguing loose ends that dangle from Walton's remarkable philosophy.