The Only Practical Ethics
Game Design is Dead

Why I Am Not a Postmodernist 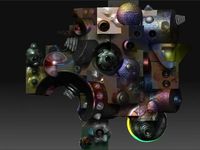 You could be forgiven, after reading the material that has accumulated here at Only a Game in the past five years, for thinking that I was a postmodernist, one who rejects objective truth, attacks black-and-white characterisations, and who adopts a position in support of scepticism, plurality and difference. But despite sharing many goals in common with postmodernism, I am not now a postmodernist, nor have I ever called myself such.

In 1927, Bertrand Russell wrote his classic essay Why I Am Not a Christian, in which he expressed the logic by which he rejected Christianity and, by extension, all religious traditions. It is not, to be honest, Russell's best work – next to, say, In Praise of Idleness, it seems positively childish. It is coloured in a large part by his own biases, which in turn are formulated in response to the excesses of early twentieth century Christianity which, to be frank, was so wildly removed from the teachings of Jesus as to warrant critique. But Russell's appraisal just isn't up to the task; he's not interested enough in Christianity to provide the requisite grease for the squeaky wheel and consequently ends up parodying religion solely in terms of doctrines of fear.

Like Russell I do not believe in immorality, nor do I believe that "Christ was the best and wisest of men". According to Russell's terms, I am not a Christian, but personally I do not see these as barriers. I do not judge Jesus to be the best and the wisest of men solely in the sense that I believe that the Buddha, Krishna, Confucius and so forth were also wise, and I am not in the habit of making wisdom into a contest. I do consider myself a Christian, because this is the religious tradition I was raised in and, despite many years of angry opposition to this faith, I still have infinite respect for the non-doctrinal Christianity of my mother and father, which I seek to emulate even today. But I also consider myself a Zen Buddhist, some kind of outsider Hindu, a Sufi, and a Discordian. In other words, I am a Christian among other things.

I have long accepted – as do Discordians, Sufi, Zen roshi and many Hindus – that absolute truths are not something we have access to. The truths of science, which are often elevated to the claim of absolute truth, are far more limited than is usually allowed: the standards of evidence they depend upon do not attain a status of absoluteness because, as Hume first noted, induction is not something that can be proved; it is rather something that must simply be accepted. Thus, nothing attains to absolute truth for us as humans. But since the only use of an absolute truth is as a big stick to hit other people around the head, insisting that they too adopt this truth, it is probably just as well that nothing achieves this status. We shouldn't need absolute truth to avoid reducing everything to falsehood.

Furthermore, many of the categories of distinction that postmodernism denies I assert as truths of some kind. I cherish our ethnic diversity, and do not wish to claim that it is purely an artificial construction (I will not ever be eligible to win a MOBO because I am not black, and I recognise the reason for such an award existing). I equally value the distinction between male and female that is so often denied in postmodernism, and I don't quite understand how one can campaign for equality of access and advancement between the genders if one does not recognise them as different. (I will not ever give birth to a child because I am not a woman, although this is not to say that the definition of a woman lies in this capacity). We may need a more nuanced view on gender and identity to tackle some of the new ways of being we now acknowledge and accept, but this doesn't mean that the concept of gender is dead.

I do not reject objective truth; I reject any secure claim to it that can be used as a reason for the enforcement of one truth as a doctrine. I believe we can have experiences of truth, and that we should be true to those experiences when we have them – if for no other reason than they are both rare and valuable. I believe that some subset of the findings of science will remain valid if one accepts the preconditions of the paradigm used to make those observations – I just don't believe in enforcing paradigms as ideologies. I believe that the ethical and metaphysical truths of religious traditions do not vanish simply because they are not built on rock solid foundations: since no knowledge has recourse to such foundations, it is ludicrous to eliminate anything on such grounds.

In short, I am not a postmodernist because I believe in truth. It may be that I believe in truth in a thoroughly postmodern fashion. But still, when it comes to questions of identity I say with confidence that if I am anything it is a Zen Sufi Hindi Christian Discordian, a Unitarian lay minister, a scientific anarchist, a philosopher, a non-foundationalist, a hermeneutic fictionalist, a game designer, a player of games, a reader, an author, and last, but by no means least, a husband and (soon to be) father. As I write, these stories are truth for me. And my awareness of the impossibility of eternally secure foundations to knowledge does not change this.

The opening image is Postmodern Junk Sculpture by Moreno Pazin, which I found at the Fine Art America website. No copyright infringement is intended, and I will take the image down if asked.

Hi Chris, I just discovered your blog and although I've been reading only a few posts, I find it very interesting. Thanks to you I know now that I'm not a post-modernist !
Do you know French philosopher Alain Badiou's propositions around the concept of truth? Given your own position, I think it might be worth a reading. To sum up, he says that one does not found truth but one is struck by a process of truth (an "event"), which one must remain faithful to avoid three pitfalls: infidelity to the event, the mistake or fidelity to a sham, and finally the erection of a truth as a pillar ideology. That's a short summary...
Keep going and btw, you have a new reader :-)
(i'm a French blogger based in New Caledonia so I hope my english is understandable enough...)

I like the discussion about multiple identities, and it's quite telling of you to claim so many (I wonder if you are a console gamer or a computer gamer? - surely those are traditionally exclusive boundaries - I say in jest!). The notion of pick and mixing your beliefs is telling, it's a very modern thing to do, and in the post modern terminology one might call such a combination a bricolage.

The 'P' word is very complicated to understand. Who are the postmodernists of consideration? Baudrillard? Jameson? Lyotard? I have a feeling that a postmodern person does not exist. It's almost the straw man that everyone wants to set alight.

Another thing to say is that postmodernism can be understood not as a metaphysical notion (this is in itself wrong), but more as a cultural approach. look how much of the media is 24-hour, and how this emphasises the notion of the hyper-real. Look at how jobs in much of the western world (and even the likes of India with their call centres) are predominantly service based industries and in such a drastic move away from industrial production. This latterly notion relates to the 'post-industrial' (which is sometimes, but not necessarily associated with postmodernism).

Postmodernism as cultural approach has a lot of ammunition and utility in social and media studies. Consider in video games how an air of the past and nostalgia is often evoked, even to the end of being potentially anachronistic (such as Metal Gear: Snake Eater - [i think that's the right title] or Red Dead Redemption).

The metanarrative point is all well and good, but that's like saying AJ Ayer's verificationism characterised the whole Vienna movement of logical empiricist philosophy. Postmodernity is a can of worms, much like the society its tryingto understand.

Jean: thanks for commenting, and welcome to the Game! I've only skirted Alain Badiou thus far, but one of his books is on my gift list, so one of the presents under the tree might have a Badiou in it. ;) I certainly know of his concept of truth as an event, and look forward to reading more about it.

(Oh, and your English is better than some of the native English speakers we get here, so "Ne vous inquiétez pas"! :D )

Sinistre: thanks, as ever, for your thoughtful comment. I wrote this thinking it might serve as a stepping point for other people to expand upon their conception of postmodernism - really, as you critique here, I took one specific reading in order to be able to write this at all (and to tie it in with Russell, which was a motivating factor). It was certainly an artefact of the choices I made in writing it! :)

"The notion of pick and mixing your beliefs is telling, it's a very modern thing to do, and in the post modern terminology one might call such a combination a bricolage."

I don't see what I do as pick 'n mix, though. I'm not grazing in the belief supermarket, looking for what might work so much as I'm finding out what I believe and discovering (unsurprisingly, perhaps) that it's already out there in various forms. That the other people who might make use of the same beliefs are more inclined to do so in an orthodox framework says more about their traditionalism than it does about me, doesn't it?

So we'll be both unwrapping Badiou's book under the Christmas tree this year ;-)
Thanks for your kind answer.