The Age of Recrimination
Note for Academics 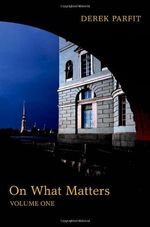 I recently finished Derek Parfit’s monstrous epic, On What Matters, Volume 1 and 2, and am currently processing my rather voluminous notes from it. It took me about four months to read this, which isn’t bad for a 1,440 page leviathan, all in all. Although it contains some great material it is far, far too long for what it is and would have seriously benefited from being broken up into shorter, thematically connected books. However, some of the things Parfit does in this work would be impossible in anything other than its current cyclopean tome format.

The first volume was rather less interesting to me than the second, simply because I found Parfit’s methods to be too systematic for his goal. He wants to pick up Kant’s task of uncovering the supreme principle of ethics – and indeed, has a serious stab at revising Kant’s formulae in order to achieve this goal. Revising and expanding some of his work on normative reasons from his earlier Reasons & Persons, Parfit is able to take his ideas much further – in part because he is now a “born again” Kantian, and thus isn’t as held up by the inherent problems with Utilitarianism (as showcased by Rawls and Parfit himself in his first book). Parfit ultimately concludes that Kant’s system, Scanlon’s Contractualism and Rule Consequentialism all coincide when cleaned up in certain ways that he finds plausible – rather than being competing ethical systems, their exponents were “climbing the same mountain on different sides”.

I have a lot of sympathy for Parfit’s (volume 1) conclusion, in so much as I believe that all ethical systems are in essence transformable from one to another. However, I see Parfit’s Triple Theory, like Shelly Kagan’s Kantian Consequentialism and other specific instances of apparent moral philosophy convergence, as being just one instance of the kind of crossover in ethical thinking that occurs because of commonality in imaginative ideals and underlying elements such as empathy. The Triple Theory is unsatisfying, however, in that Parfit has had to conduct some considerable violence to Kant’s project in order to make it reach his very high standards – namely, to make it logically and mathematically sound. He basically has to remodel it until it very nearly is Rule Consquentialism, and thus it’s not wholly surprising that after this make-over they seem to “fit together like two pieces in a jig-saw puzzle.”

Volume 2, however, immediately justifies itself by commencing with a series of essays by various moral philosophers that respond to and critique Parfit’s first volume. This odd state of affairs came about since the material originated as a lecture series, plus drafts of the book have been in circulation for quite some time. (Indeed, a book entitled Essays on Derek Parfit’s On What Matters was published two years before the book itself!) The response essays that open the second volume are all great reading – and in fact the contribution by Allen Wood is my favourite part of the entire project. Wood (perhaps the greatest living Kant scholar) supports some of Parfit’s points before cogently arguing against Trolley Problems and similar thought experiments (which are key to volume 1’s argument) claiming they are “utterly disastrous” and “far worse than useless for moral philosophy”. For me, this essay isn’t just the best thing about On What Matters, it’s my favourite paper on moral philosophy bar none. Parfit’s response to Wood’s contribution, frankly, doesn’t seem to wrestle with the depth of the objection it raises.

Parfit is at his best in the main body of the second volume, in which he presents his meta-ethical theory in a formal but slightly scattershot fashion. There are some great sections here, none of which depend on having read volume 1 – which makes me think some philosophers would do better to focus on the second part alone. Some of my favourite moments are here in the minutiae, particularly in Parfit’s critique of Nietzsche which lands right before closing time. With a straight face, Parfit writes:

In other passages, Nietzsche returns to the aim of revaluing all values. We need, he claims, new values. But Nietzsche says little about these values. In his last published attempt to revalue values, The Anti-Christ, Nietzsche merely returns to attacking Christian values. Nietzsche hopes for ‘a new nobility’, whose ‘formula for happiness’ would be ‘a Yes, a No, a straight line, a goal’. That is not a helpful formula.

Nietzsche’s brand of poetic madness is about as perpendicular to Parfit’s logical, methodical process as is conceivable, and reading the latter’s thoughts on the former is thoroughly entertaining. Personally, I’d have put material like this up front instead of opening with the mind-numbing sequence of definitions that clog up the start of the first volume.

Ultimately, reading On What Matters is like being locked in a room with a mad genius for a week while he carefully explains his theories. There is much to commend it, but it’s also seriously heavy going – not because it’s too complex, but just because it is so verbose, and so systematically unwieldy. Fans of Parfit’s earlier philosophy are likely to be underwhelmed by this new work, which doesn’t contain anything quite as spectacular as the discussion of Persons in part III of Reasons & Persons, although as a summary of the state of moral philosophy, a source of new points of departure, and as something to gainfully push off against through opposition, On What Matters has a great deal to offer. The books are essential reading for anyone interested in normativity – especially if you are looking for an impassioned defence of the idea that some things really do matter, despite the prevailing sceptical currents in meta-ethics. I can’t recommend it unequivocally, but I certainly don’t regret having tackled it.