The Mythology of Evolution: Publication Date
Review of Imaginary Games 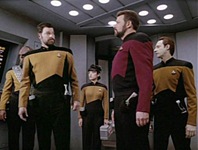 What happens to the notion of digital immortality when the transfer from the flesh is imperfect?

Recently, I replaced my ailing iPhone with a newer robot of the same lineage. Apple were confident the ‘consciousness’ of my old device would be perfectly transferred to the new body using iTunes built-in backup restoration software. Of course, this isn’t what happened. While my contacts, calendars and (most importantly!) notes were correctly transferred, none of my music or photos reappeared and only about two out of every three apps installed themselves. You could say my new iPhone is a clone of my old one, but only a low fidelity copy.

Since this is far from the first time a computer backup has resulted in less than perfect fidelity, I began to wonder about digital immortality – the idea of copying a person’s memory and identity (their engrams, as some science-fiction writers put it) via a computer. This is a fantasy that many nerds cling to, in a manner wonderfully parallel to the old Christian notion of ‘the resurrection of the flesh’ (bodily resurrection) that is no longer popular. As I’ve said before, I'm agnostic about all kinds of immortality, although at the same time I see biologically enhanced longevity as a path to immortality that would be a population disaster of epic proportions, and fervently hope it proves impossible.

The question I want to explore for now is: would becoming digitally immortal be only a low fidelity immortality? And if so, would that render it pointless?

Derek Parfit, the main voice in contemporary Western philosophy on matters of personal identity, argues that the sense of identity we feel is an illusion, and what really matters is the continuity of our  memories and experiences – if these could be copied (his example is a Star Trek-esque teletransporter), it wouldn't matter how or how many copies resulted. Personal identity isn’t important, Parfit argues, just continuity of experience. (He was unaware, as he derived his conclusions logically, that he was espousing a form of Buddhist metaphysics derived in this case from science-fiction thought experiments). Suppose we grant Parfit his claim: it doesn’t matter is you persist in your body, only that some essential copy still exists. (I have counter arguments but now isn't the time to pursue them). The vital question remains whether any of the usual techno-immortality scenarios would be of sufficiently high fidelity.

Taking just one example, could you copy your brain’s engrams onto a computer, clone your body, then transcribe your engrams back into your ‘new brain’? Probably not, or at least not with any guarantee of fidelity. Clones are genetic copies but what any given gene pattern produces depends in part upon the circumstances of its development. As Richard Lewontin noted, even if you knew the genome and sequences of environment, you wouldn’t know the organism that results. Given that the neural ‘wiring’ related to anyone’s mental capabilities and experiences is part of this unique developmental process, this kind of technology could only ever produce low fidelity copies.

If clone-and-program is insufficient, what about pure digital immortality – the computer simulation of engrams? Again, since much of what makes each individual who they are is specific to the  precise nature of their physical body and brain, there are strong reasons for doubting such a simulation could achieve anything more than a low fidelity duplication. Even if the technology required to digitally simulate neurology were plausible, questions about how to read the necessary ‘data’ would remain. Because a change of ‘platform’ is entailed, perfect fidelity is highly unlikely.

What about Parfit's chosen example: teletransportation. Alas, as the writers of Star Trek: The Next Generation knew, Heisenberg’s uncertainty principle casts unavoidable doubt about the capacity to perfectly ‘read’ matter for copying – which is why they invented “Heisenberg compensators” as technobabble to brush the obvious problem under the carpet. Similarly, given the role of connectivity in neurology even a quantum-level ‘scan’ (assuming such a thing were possible) might not be a way of reproducing the necessary conditions. This would mean even a transporter-copy scenario would be low fidelity, if it was not in fact completely impossible.

The only conceivable kinds of techno-immortality duplication have inherent problems. These give us reasons to believe that any form of ‘personal copy’ could only be low fidelity, and so we should doubt the validity of calling what might result ‘immortality’. Besides, if the best we can hope for is not our continuation but the creation of a new human being with some connectivity to who we are, we already have low fidelity immortality, and always have: it’s called ‘children’. That this isn't remotely what geeks fantasize about when it comes to immortality helps to reveal that these techno-mythologies are ultimately about alleviating the fear of death.

Techno-immortality is another example of the psychological continuity between nonreligion and traditional religion. One of the important roles of religious beliefs is to help orient us towards death – what is true about such stories is not necessarily the important point. We all have to die (whatever may or may not happen after death), and the ways we think about dying are conditioned in part by our cultural and personal beliefs. These are not optional, as opponents of religion sometimes like to suggest – even the nonreligious mythologize death, as techno-immortality reveals. The best approach may be to set aside concerns about truth in this regard, and leave everyone to decide for themselves what to believe about death.

“On a quiet night, when there is nothing but me and my thoughts, I notice a deep and profound stillness in the back of my mind. It is as if a tiny speck is steadily seeping an inky blackness, a darkness that draws in the spark of my synapses like a black hole. It is a lack of something that I cannot fully describe, but is the more profound because of its subtlety.”
“Your soul?”
“I guess you could call it that, in a manner of speaking. Whatever force kept me alive has ceased to be, and I am a mere representation of the person that has gone. Perfectly executed, but not alive in a traditional sense. I wouldn’t call it the soul so much as the spark of life.”

Mike: can't help but think that some spambot generated that comment, but I'll let it slide! :)